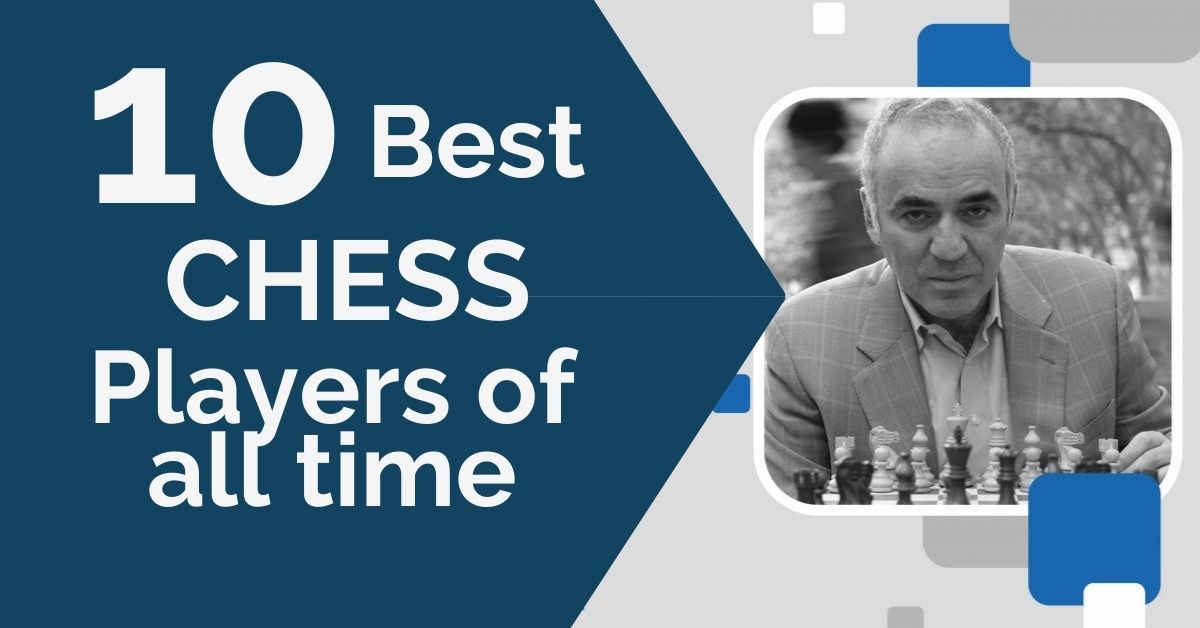 Many chess history experts keep arguing whom to consider the best chess player of all time, but we will try to stay away from it. The aim of this article is different. The idea is to familiarize the readers with the greatest chess players and their best games. That’s why I ranked the best chess players in chronological order, starting from the past. Also, I was considering not only their strength and achievements but also the influence they made on chess overall.

It was quite difficult to choose the top-10 best chess players because there were many great chess players who more than deserved to be on this list. The same was with their best games, but, hopefully, you will enjoy my choices. 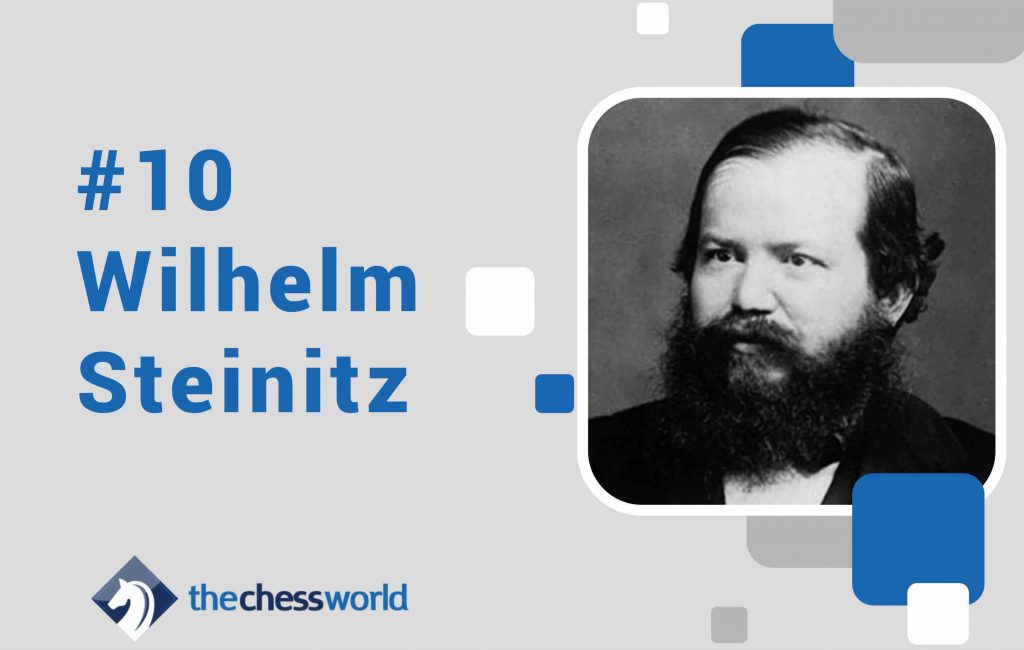 Wilhelm Steinitz is known not only for being the first official World Champion but also as the father of positional chess. Chess players of the 19th century were adepts at aggressive and attacking play while defending was left for cowards. Steinitz’s revolutionary theory of positional play made a huge impact on chess and is still relevant. Many future best chess players, including the next World Champion Emanuel Lasker, acknowledged him as their teacher.

He won the World Champion title in 1886 after beating Johannes Zukertort in a match. Later he defended his title by winning matches versus Gunsberg and Chigorin but lost his title to Emanuel Lasker in 1894.

Although to defend his theory Steinitz was often playing positionally or even defensively, the following game was finished by a brilliant attack. 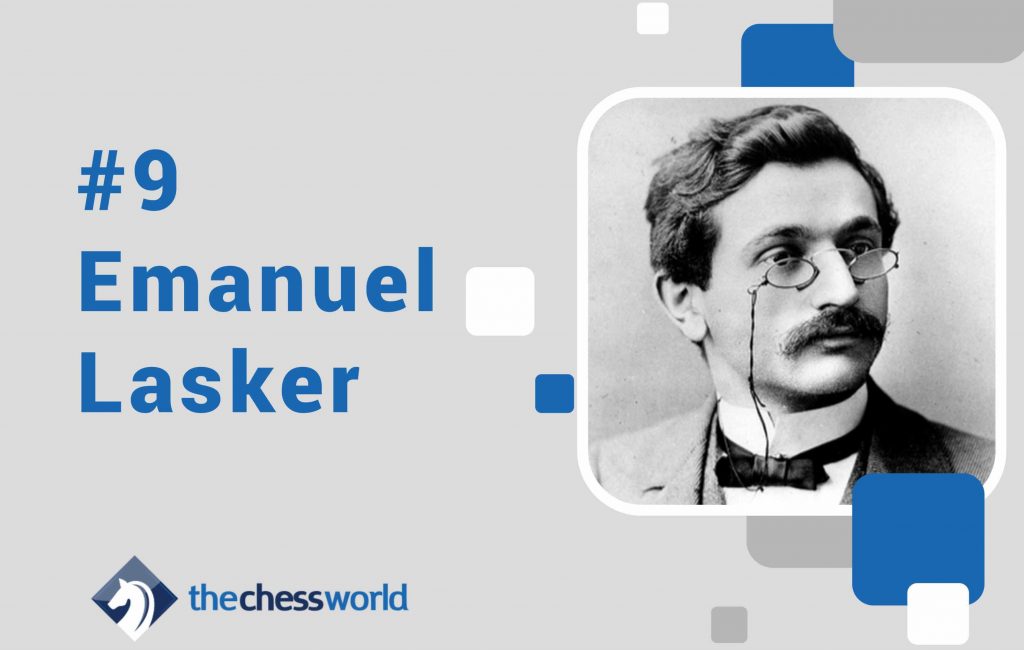 Emanuel Lasker became the World Champion in 1894 and held this title for 27 years, which is the longest reign of the title in the history of chess. One of the main features that allowed him to stay on top for so long was his flexibility.

He kept exploring new things in chess even after becoming the best chess player in the world, and that allowed him to fight with the next generation of chess players successfully.

Lasker was one of the first top players who treated the psychology of chess seriously. Being a universal player, he could change the style of his play depending on the opponent’s strengths and weaknesses. Nowadays this approach is widely used by chess players of different levels.

Let’s take a look at his brilliant win over Siegbert Tarrasch. The game was played in the World Championship match in 1908. 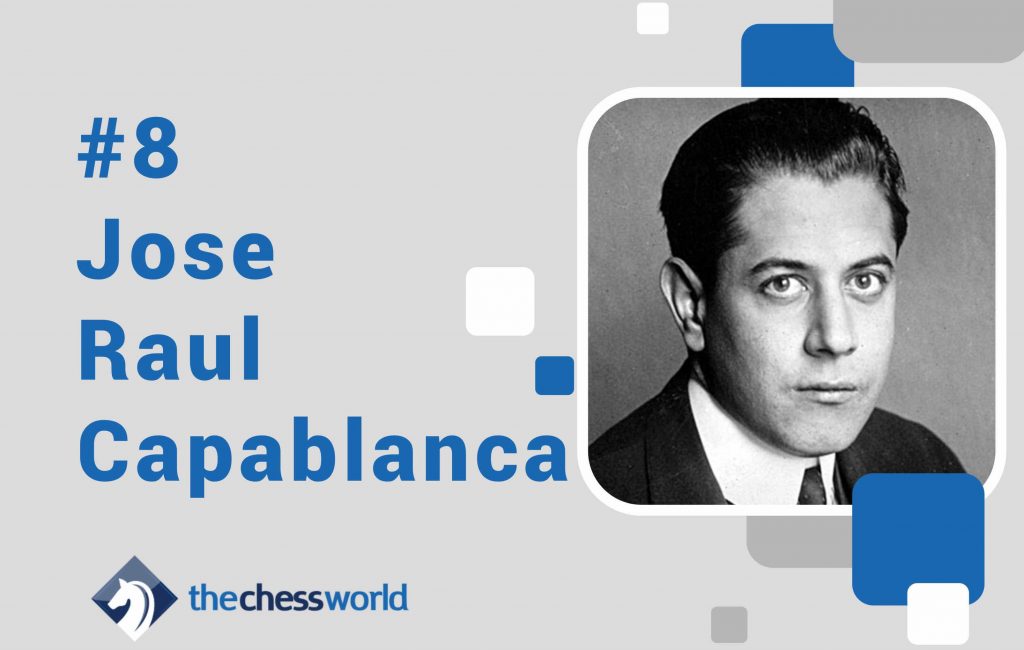 Jose Raul Capablanca is one of the most remarkable chess players in history. He became the World Champion in 1921, after defeating Lasker in the match, and held this title till 1927.

He was a great intuitive player; it seemed like his hand just knew where to put the pieces. He had a brilliant endgame technique and overall played with high precision.

Anatoly Karpov once said: “The ideal in chess can only be a collective image, but in my opinion, it is Capablanca who most closely approaches this.”

Let’s see the best Capablanca’s win in the match against Lasker. 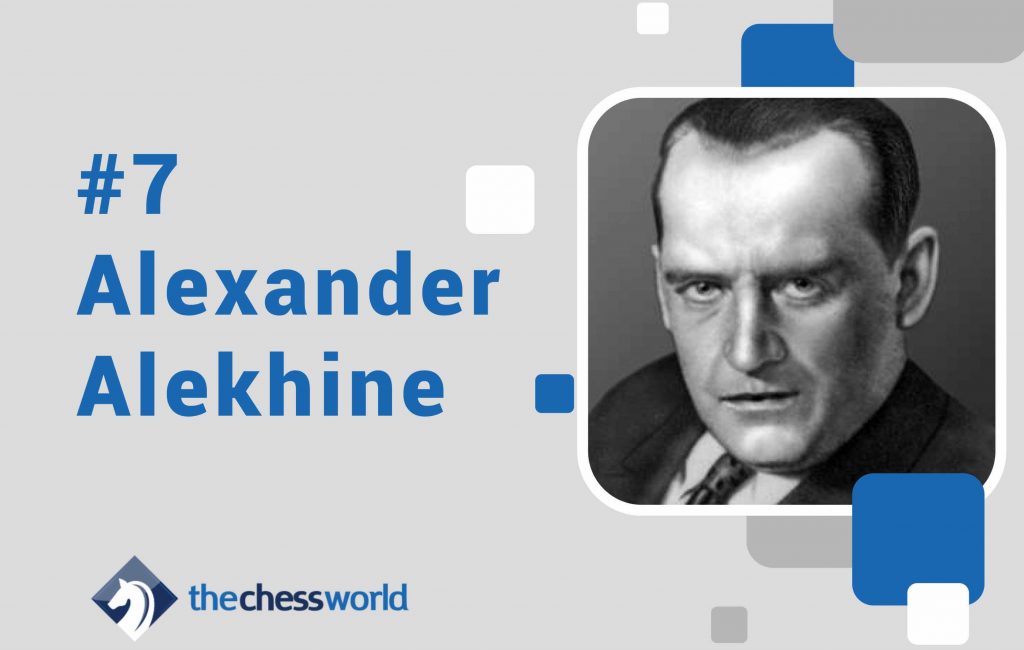 Unlike Capablanca’s, Alekhine’s style was aggressive and imaginative.

He was one of the first chess players who started approaching openings professionally. He found out a lot of new ideas and concepts and made a huge impact on opening theory. Alekhine was also great at positional and endgame play.

Once he even said: “To win against me, you must beat me three times: in the opening, the middlegame, and the endgame.”

He became the World Champion after beating Capablanca in 1927, and held this title until 1935, when Max Euwe “borrowed” it for 2 years. In 1937, Alekhine took revenge and never played the title matches anymore, and thus died as the World Champion in 1946.

Alekhine won a lot of beautiful games and was considered a genius of combinational play for a reason. One of his best games was played in Baden-Baden in 1925 against Richard Reti. 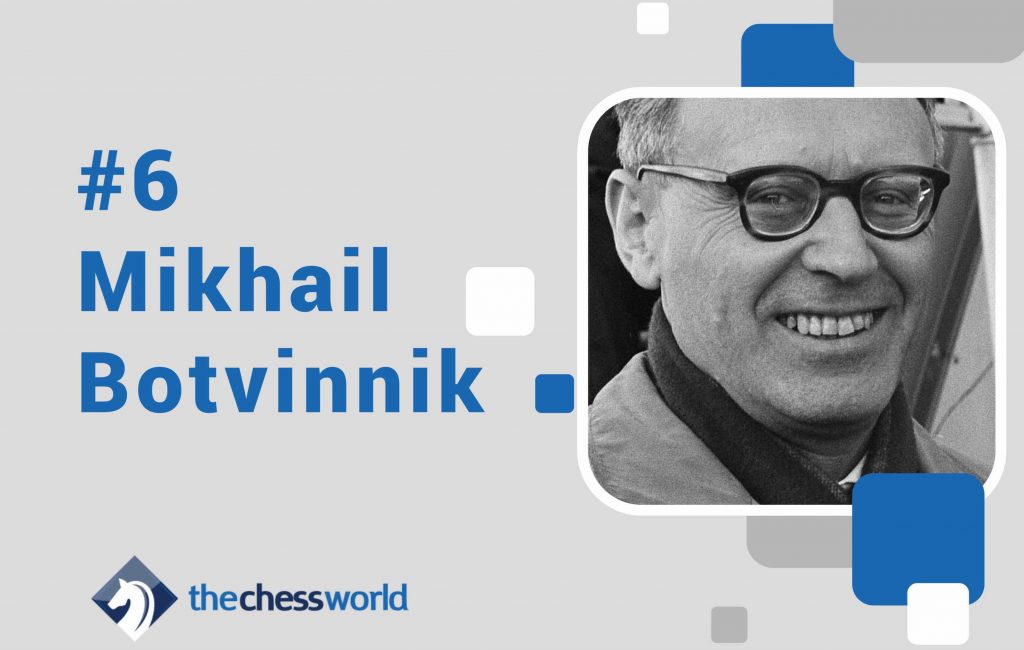 Mikhail Botvinnik was a Soviet chess player who became the World Champion in 1948. He also was a professor with a doctoral degree in electrical engineering; he was fond of the idea of computers playing chess and put a lot of effort into researching that field.

But his impact on human chess players was even bigger. He was a true professional who made chess into a real sport. His systematic and methodical work on chess was adopted by new generations; he started the era of Soviet chess players dominating international competitions. The famous Soviet grandmaster Leonid Stein once acknowledged: “We all came from Botvinnik.”

The brilliant victory of young Botvinnik over great Capablanca in 1938 has become one of the most famous games in history chess. 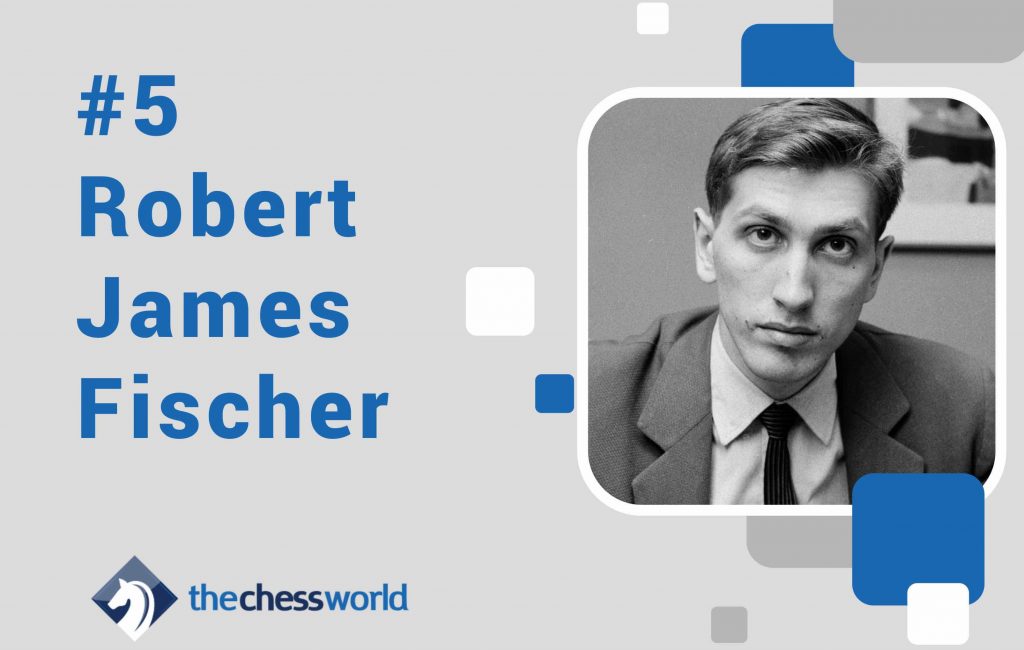 Bobby Fischer was an American grandmaster and one of the most phenomenal chess players of all time. He alone managed to stop the Soviet domination in the chess world. In the Candidate match of 1971, he defeated Mark Taimanov by an outstanding score 6-0 and then did the same to Bent Larsen. In the last Candidate match against the former World Champion Tigran Petrosian, Fischer experienced some difficulties at the beginning but prevailed at the end and won by the convincing score of 6,5 – 2,5. In 1972, he became the World Champion after beating Boris Spassky.

This incredible achievement made the world really excited about chess and inspired new generations of players in America. Many chess players grew up on his books “My 60 memorable games” and “Bobby Fischer teaches chess”.

Fischer was quite innovative. In 1988, he suggested a chess clock with increment after each move, which nowadays is used everywhere. Well known chess variant “Chess960” was also invented by him and sometimes is called Fischerandom. 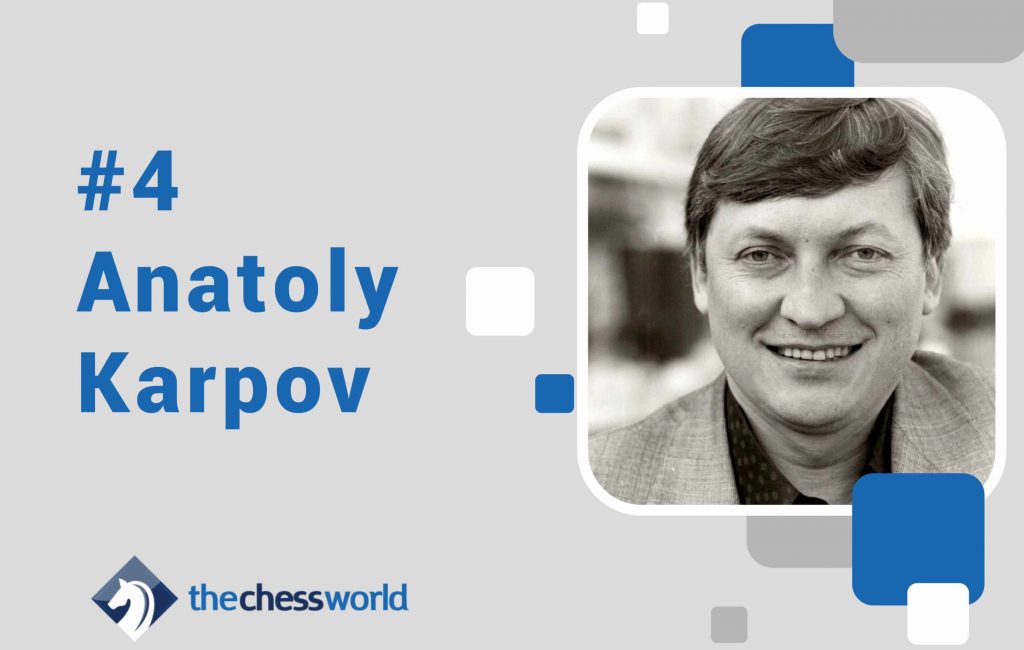 Karpov created a lot of positional masterpieces; he had a brilliant endgame technique and was the best at restricting and suffocating opponents’ play and ideas.

His games are highly instructive; here’s one of the most famous examples: 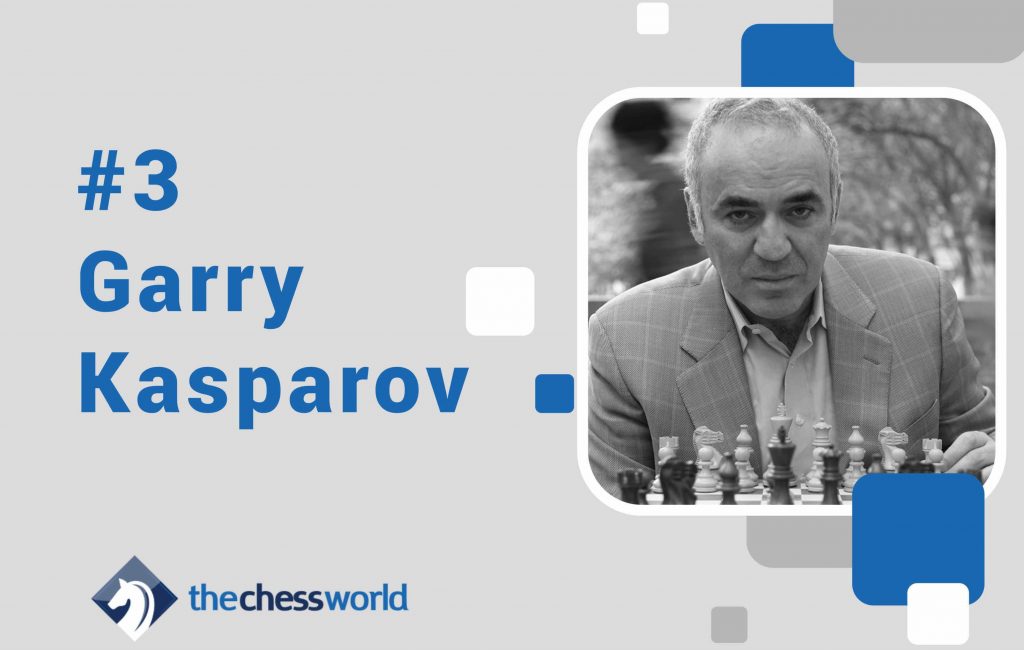 Garry Kasparov is one of the most outstanding chess players ever. His imaginative, aggressive style, outstanding calculation abilities, and deep knowledge of opening theory were intimidating his opponents and brought great success to him. He was ranked world No.1 for over 20 years. His peak rating of 2851 seemed to be unreachable for mere mortals.

He became the World Champion in 1985 after beating Anatoly Karpov. They played 144 games in 5 matches, and that was one of the most ruthless encounters in sports history.

The following game is one of the most impressive chess masterpieces ever played. 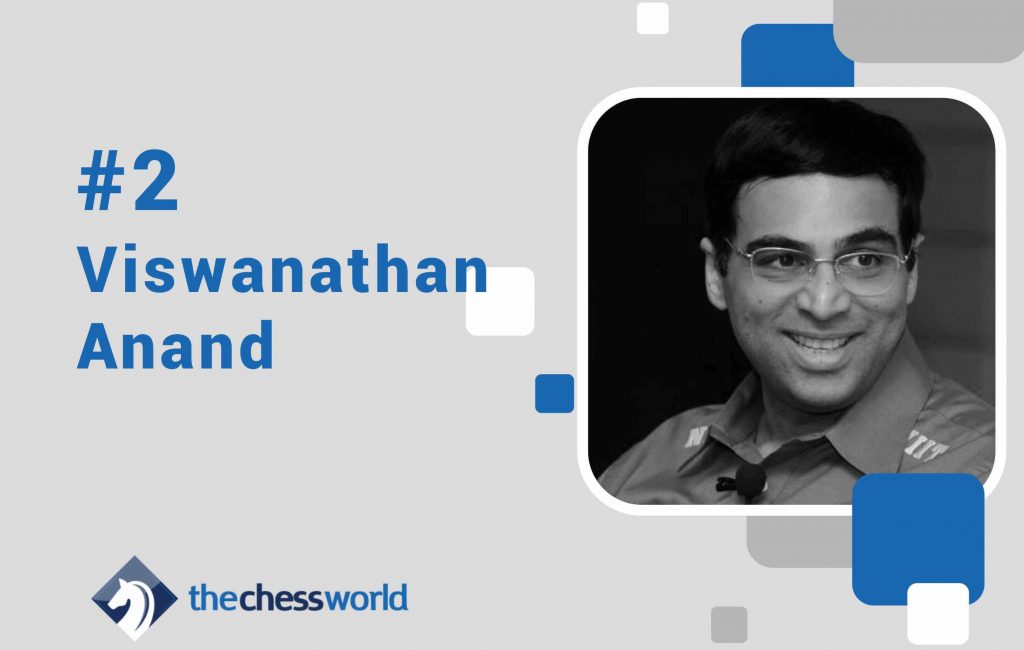 Viswanathan Anand became the first grandmaster of India in 1988. His fast speed of playing and active style left no doubts that he will become one of the world’s best chess players. Already in 1995, he faced Garry Kasparov in a match for the World Championship. It was a tight one, but Anand eventually lost. Nevertheless, that was just the beginning. Nowadays Anand is the only chess player who won the World Champion title in all the possible formats: tournament, match, and knock-out competitions. He was the highest-ranked chess player for 21 months, and his peak rating was 2817.
The following game is a stunning example of Anand’s dynamic style and great opening preparation. 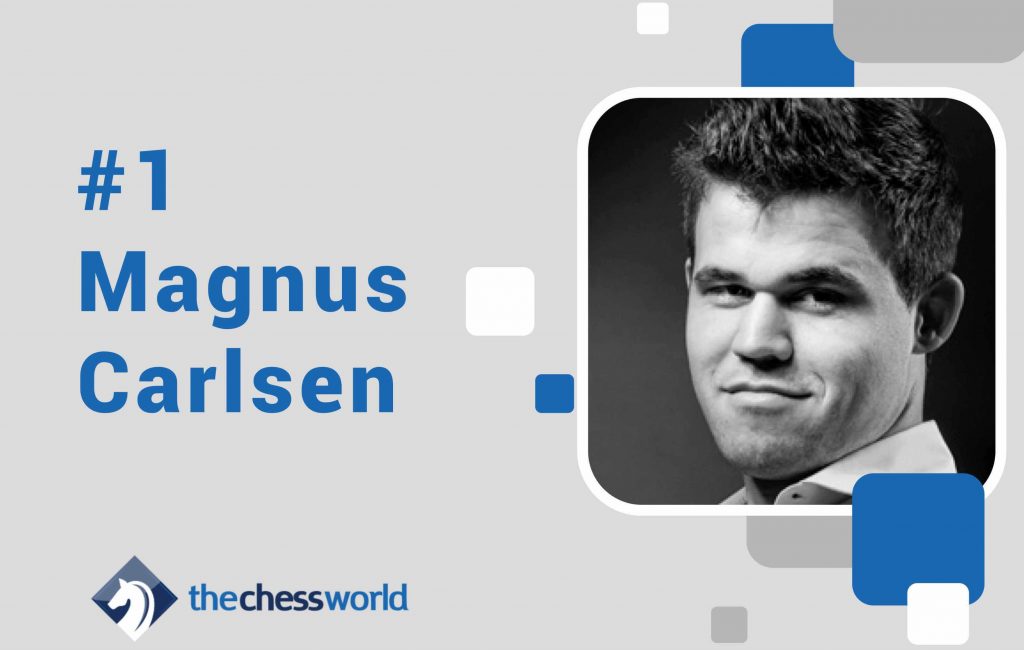 Magnus Carlsen is the current World Champion in classical, rapid, and blitz formats. He also has been the world No.1 since 2011 and the one who surpassed Garry Kasparov’s rating record by reaching an astonishingly high ELO of 2882.

Carlsen achieved the longest unbeaten streak at the elite level in classical chess, which included 125 games and lasted for two years, two months, and 10 days.
His history is still to be written, but he’s already one of the best players of all time, and here’s one of his finest recent games.