4/7/2021 – 110 years ago, a very strong tournament was played in San Sebastián. Almost all the top players of the time participated. In the end, the winner was a newcomer, José Raúl Capablanca, who was still completely unknown in Europe.

On 20 February 1911, an outstanding chess tournament began in the Basque city of San Sebastián (Basque: Donostia). Fifteen chess masters were invited, who had earned the right to participate by getting excellent results in earlier tournaments.

Among the participants were the best players of the time, namely Siegbert Tarrasch, Frank James Marshall, Carl Schlechter, Geza Maroczy, David Janowski, Amos Burn, Akiba Rubinstein, Aron Nimzowitsch, Rudolph Spielmann, Milan Vidmar, Ossip Bernstein, Richard Teichmann, Oldrich Duras, Paul Saladin Leonhardt and the young José Raúl Capablanca, who was still unknown in Europe. Of the world’s best players, only Emanuel Lasker was actually missing. Lasker, as well as Henry E. Atkins, had been invited but did not accept the invitation. Instead, Lasker commented on the games of the tournament from Berlin for the New York Evening Post. Lasker married Martha Cohn on 1 March 1911, which was perhaps the reason for the cancellation.

The venue for the tournament, which ran from February 20 to March 17, was the Grand Casino in San Sebastián.

He was a child prodigy and he is surrounded by legends. In his best times he was considered to be unbeatable and by many he was reckoned to be the greatest chess talent of all time: Jose Raul Capablanca, born 1888 in Havana. 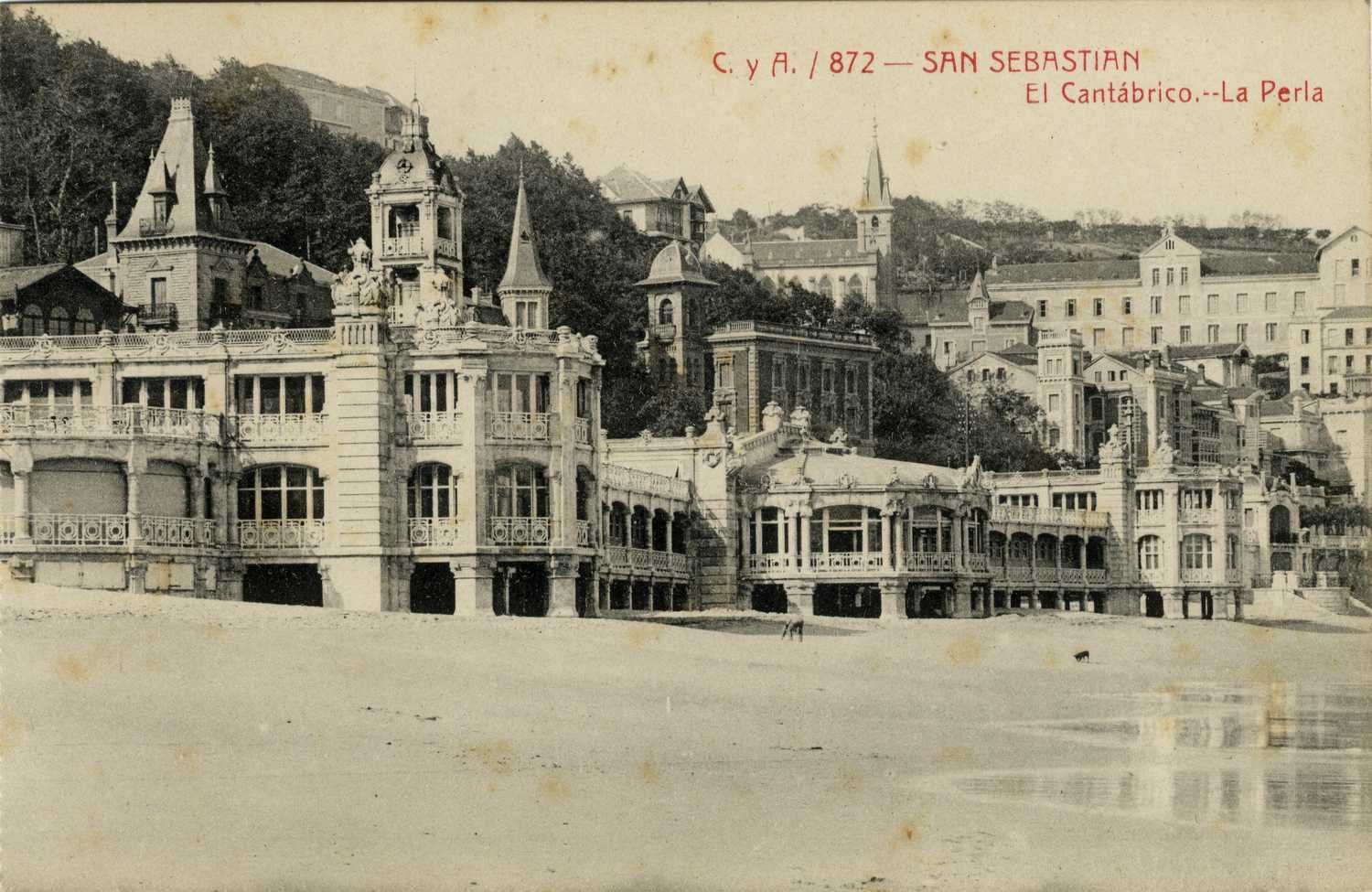 The Casino of San Sebastián

The time control was set at one hour for 15 moves. The tournament director was Jacques Mieses. His special merit was that he convinced the tournament’s sponsor to reimburse the players for their travel expenses and to give them free board and lodging during the tournament. This was not common before, but became the norm after this event, at least for top tournaments.

When it became known that the Cuban Raúl Capablanca, a player who had not yet earned the right to participate in other tournaments, was to take part, Ossip Bernstein and Aaron Nimzowitsch are said to have protested to the organizer Jaques Mieses. This is a persistent rumour for which there is no evidence. But after Bernstein lost to Capablanca in the first round, the protest is said to have died down. In fact, Capablanca had until then only proven his astounding strength in an international setting through his match against Marshall in April 1909, which he had clearly won with a 15:8 score.

It is sometimes said that Frank Marshall was responsible for Capablanca’s participation in the San Sebastián tournament. In fact, Manuel Márquez Sterling was the one that did it, Capablanca biographer Miguel Sanchez found out. Manuel Márquez Sterling was born in Perú in 1872, was a journalist and later a diplomat, and was active in the Cuban independence movement. Márquez Sterling travelled extensively and exported goods from Cuba to Europe. He also loved playing chess. During a stay in France, he by chance took part in the 1900 Paris tournament (second to last place). He then lived for a while in Belgium as he had close ties to the Belgian royal family. Under the pseudonym M. Marquet, he financed the tournaments in Ostend in 1905, 1906 and 1907. He also supported the publication of chess magazines in various Latin American countries. 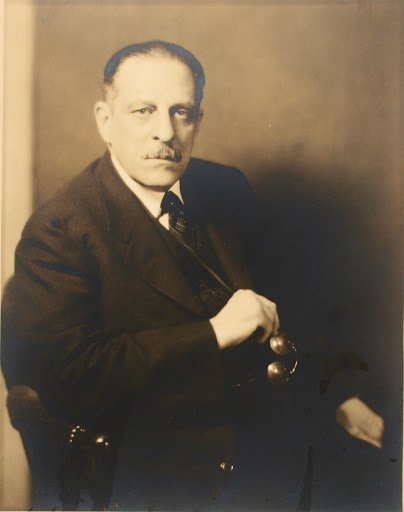 Under his pseudonym, the enterprising Manuel Márquez Sterling also became the operator of the Grand Casino in San Sebastián, and organized the chess tournament as a financier. In 1934, Márquez Sterling was even the president of Cuba for six hours. 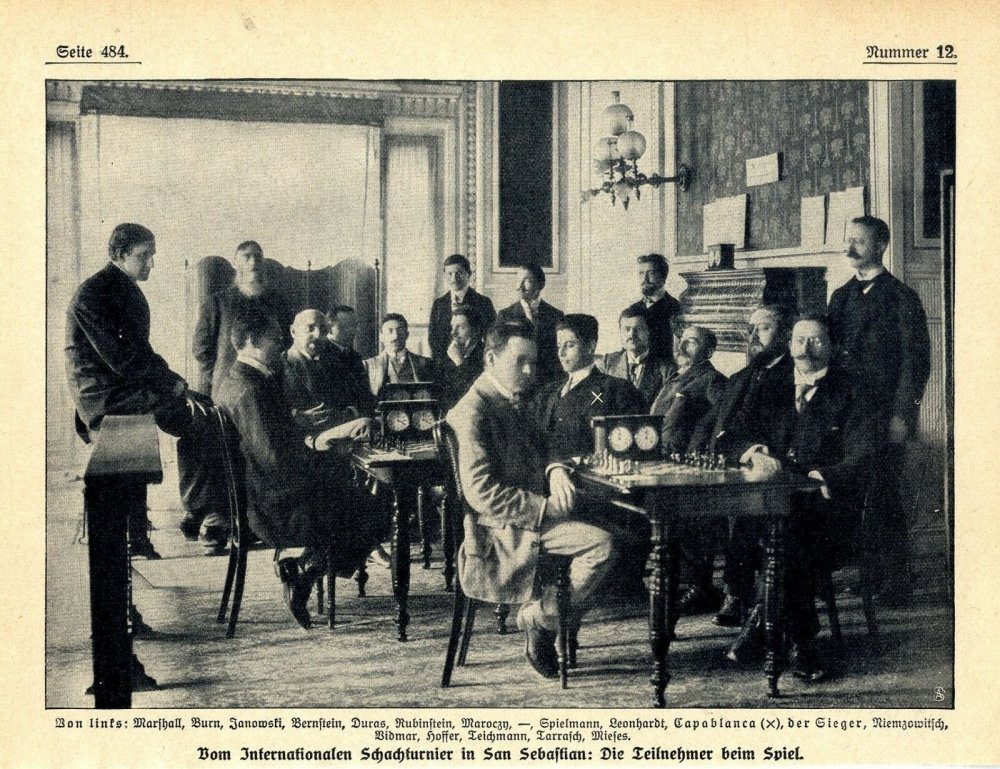 The first of two group pictures

Thanks to Márquez Stirling’s invitation, Capablanca, who had been unknown in the European chess world until then, embarked on the Lusitania for Europe on 8 February 1911. Another good reason given for Capablanca’s invitation was that he had received Spanish citizenship at birth in 1888, for Cuba was still a Spanish colony at that time. Capablanca was therefore the only ‘Spaniard’ in the field. 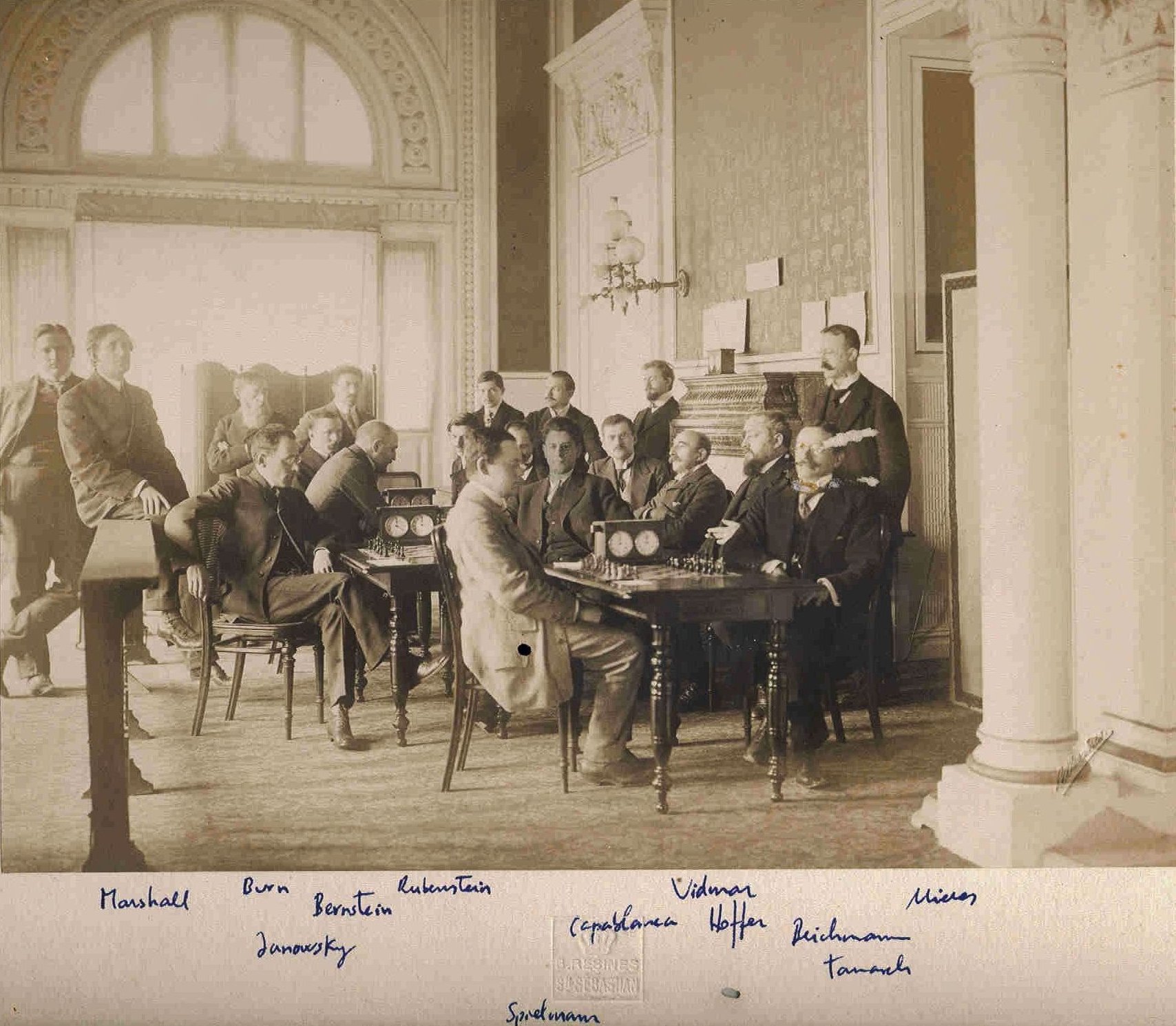 The participants in the playing hall

During the tournament, the young Cuban received advisory support from some other tournament participants. Teichmann, Schlechter, Tarrasch and Maroczy gave the newcomer tips. Capablanca built up a friendly relationship with Richard Teichmann in particular. Teichmann, who loved chess as much as cards or billiards, warned Capablanca especially about Maroczy’s abilities.

Among all the players, Akiba Rubinstein played a special role during the event. He hardly ever left his room, only turned up for the games, and sat at a corner of the tournament hall between moves so as not to disturb the other players with his presence.

Aaron Nimzowitsch, on the other hand, was extremely nervous, felt disturbed by the slightest noise and was always on the verge of paranoia during the games. Once the game was over, Nimzowitsch relaxed and praised his opponents’ skills, especially if they had lost.

Capablanca described his impressions of the players who had taken part in San Sebastián a few years later, in 1916, in an article for the New York Evening Post. According to Capablanca’s reports, Tarrasch behaved less capriciously than he had previously been described. He was very correct in all things and his exaggerated self-esteem was conspicuous to Capablanca. Capablanca noticed that Tarrasch was always very well-prepared in his games. However, he considered Tarrasch tactically weak and vulnerable. If something unforeseen happened, Tarrasch would brood. It could happen that Tarrasch would stare at the board, motionless and without any facial movement, for an hour before he finally made his move.

Rubinstein had entered the tournament as one of the favourites and finished undefeated. Moreover, he was the only player who defeated Capablanca. Rubinstein, however, drew too often and in the end was half a point short of victory.

The prize money for the winner of the 1911 San Sebastián tournament was 5,000 francs. Capablanca also received the prize of 500 francs donated by Baron Rothschild for the best game of the tournament. He was awarded for his game against Bernstein. Rubinstein and Vidmar shared second place. Marshall came fourth. 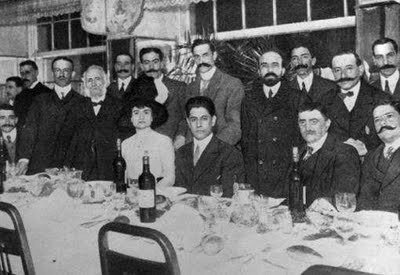 Picture of the closing banquet

In 1912, another major tournament was held in San Sebastián, though not quite as strong as the first edition. Capablanca did not participate. Rubinstein won.

André Schulz
André Schulz started working for ChessBase in 1991 and is an editor of ChessBase News.
Discussion and Feedback Join the public discussion or submit your feedback to the editors
We use cookies and comparable technologies to provide certain functions, to improve the user experience and to offer interest-oriented content. Depending on their intended use, analysis cookies and marketing cookies may be used in addition to technically required cookies. Here you can make detailed settings or revoke your consent (if necessary partially) with effect for the future. Further information can be found in our data protection declaration.