4/17/2021 – Chess players who ventured to go Belgrade this April are spoilt for choice among chess events which take place literally every single day of the month. We are halfway through the Belgrade Chess Spring Festival that has started on 2 April and will finish on 30 April. | Photos: Official website

The Belgrade Spring Festival is a follow-up of the very successful first chess event, The Belgrade Summer Chess Festival organised by the Champions Chess Academy in 2018. The second edition, in 2019, was a seal of approval of the preceding edition bringing in over 200 hundred players from 19 countries. The third edition, scheduled for the summer of 2020, was in full preparation, with a great number of players already signed up, when, in accordance with the regulations imposed for prevention of the Corona pandemic, the organisers, like many others, were obliged to cancel it.

As soon as the situation and regulations eased, the creators of the Champions Chess Academy, the ‘three musketeers’ as I called them during my visit at their first edition, could no longer desist and, braving all obstacles, launched the Belgrade Spring Festival, 2021.

The three accomplished grandmasters, Ivan Ivanishevic, Branko Tadic and Milos Perunovic, fulfil admirably the role of organisers. They have created the Champions Chess Academy with the aim of providing chess training, organising tournaments and generally bringing back the old chess glory to Belgrade.

Over 300 players, 36 of them titled, from 20 federations are taking part in the Spring Festival’s ten events throughout April.

The organisers took utmost care to implement a strict compliance with all epidemiological measures prescribed for indoor sports events. An elegant 600 square meters ‘Ceremonial Hall’ serves as a playing venue that provided ample space for maintaining the prescribed distance in accordance with the pandemic rules. 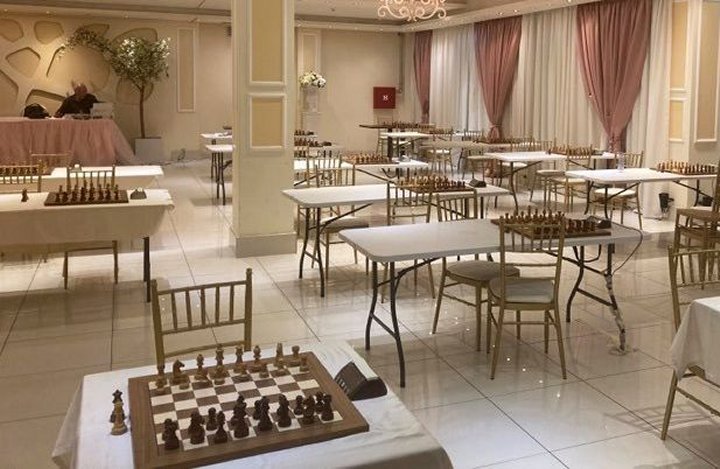 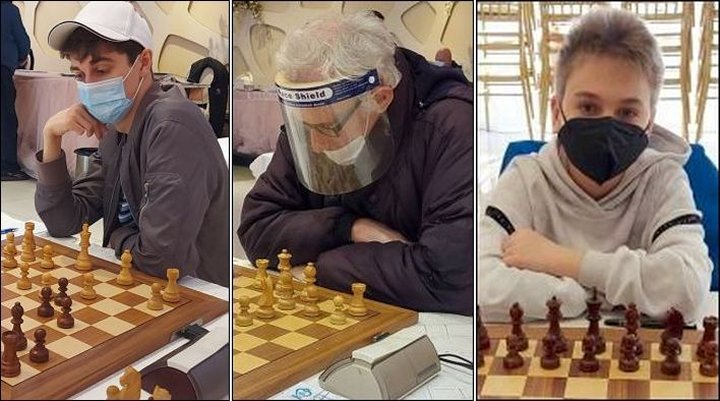 Two Armenian grandmasters dominate the Festival. The winner of the Open tournament, which finished a few days ago, was Martirosyan Haik M., a former world champion U16. With a score of 8/9 he left behind his compatriot Sargsyan Shant with just a half a point difference. The reverse happened at the rated 9-round rapid tournament that took place on the 11th April where Sargsyan won with 8/9, while Martirosyan was second with 7,5/9. Both of them will participate in the GM round robin tournaments in the second half of the month. 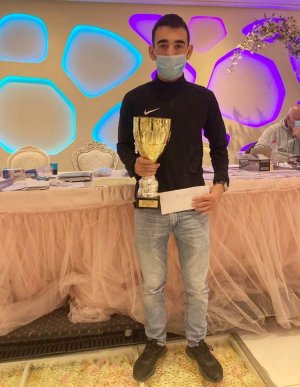 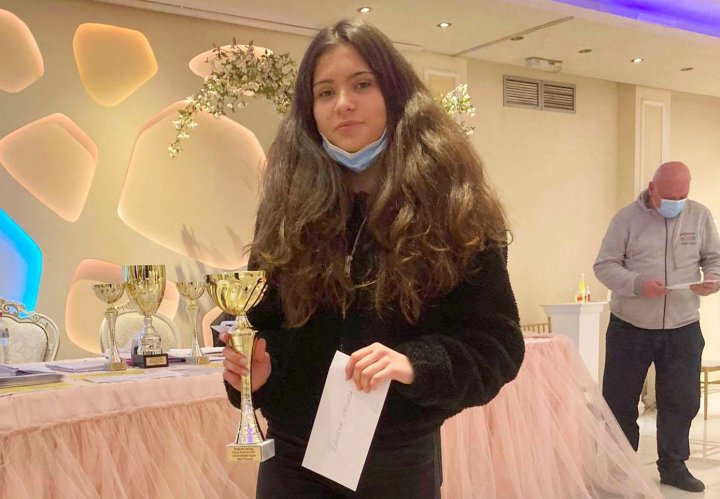 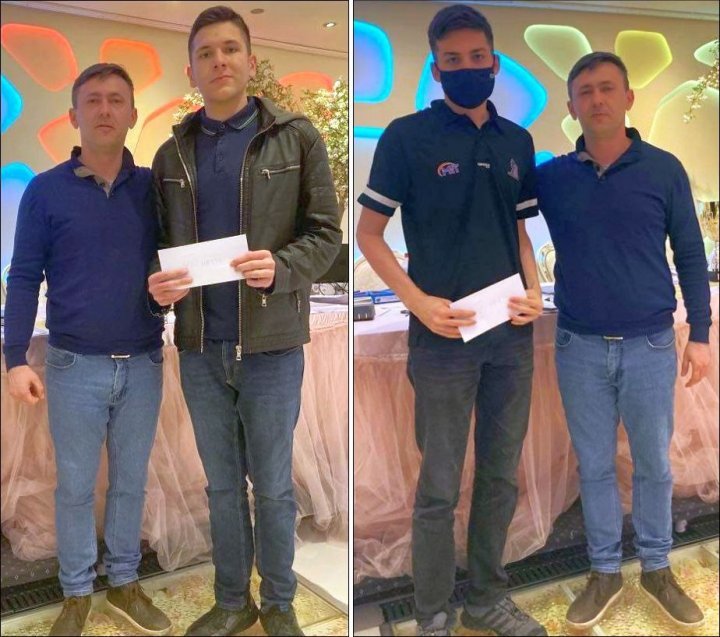 In the work of the Champions Chess Academy young players are given a prominent place. Chess training and competitions are organized throughout the year. Whenever possible,  lessons are organized outdoor as the Academy’s management strongly believes that ‘Learning in Nature’ provides kids with multiple benefits as it is stated on their website:

Outdoor educational camps  provide children with the opportunity to feel the complexity, diversity and interconnectedness of all factors that operate in the natural environment through direct contact with nature. Through rest, fun and good mood, children’s curiosity strengthens, experiential knowledge expands, and psychophysical development improves. Through learning and fun the participants of the “Academy” will become ambassadors of the renewed Serbian culture and the institution of chess. Our primary goal is to bring the chess tradition back to our homes throughout our country and region by teaching young people. We see chess as an art, science, strategy and a valuable educational tool, gymnastics for children’s brains. 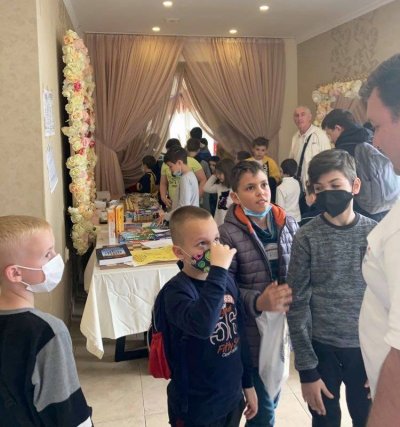 It was obvious therefore that at the Belgrade Spring Festival children would enjoy a special treatment. Not only encouraging prizes were allocated for them in all open tournaments, but on the 3rd April, a 9-round (10min. + 5sec.) Open Juniors Championship took place for the categories U8, U10, U12 and U14. 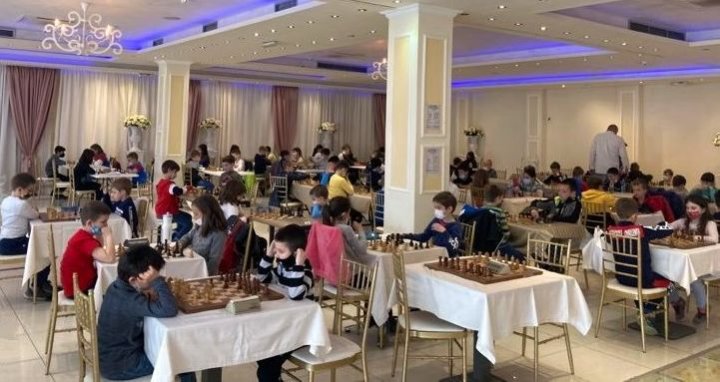 Over 100 young chess players competed in the Juniors Open championship 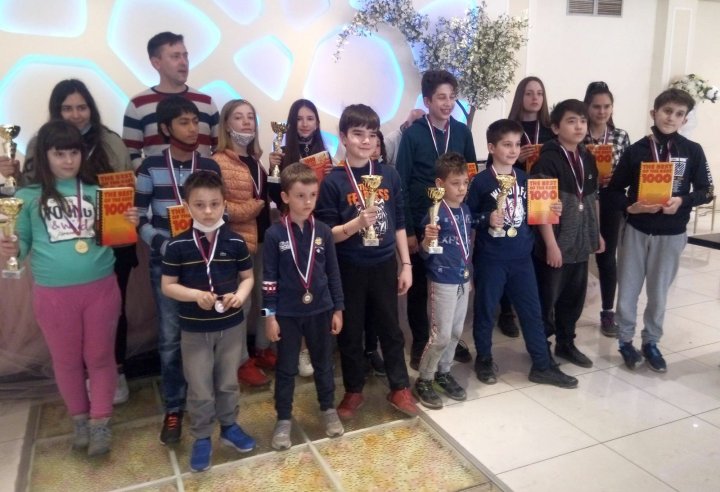 A group photo of the juniors winners from all categories

A notable success in the U10 was achieved by the winner Vera Vujovic (far left in the front row in the group photo) who left behind boys and girls making a perfect score of 9/9. 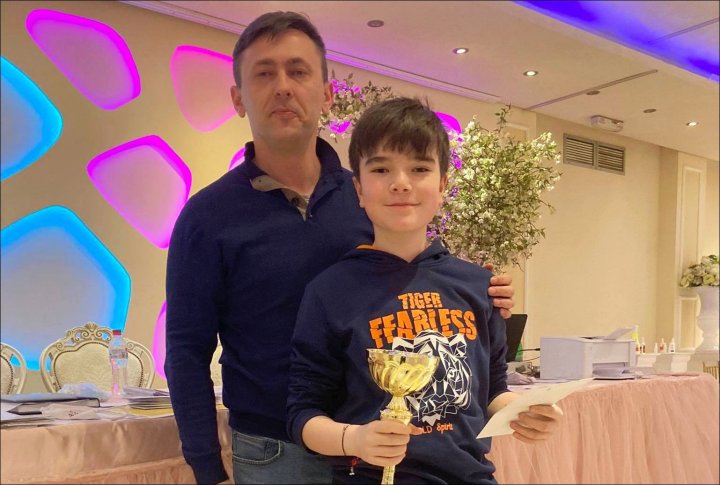 In the U14 category the Kazakh Edgar Mamedov claimed victory with 8,5/9 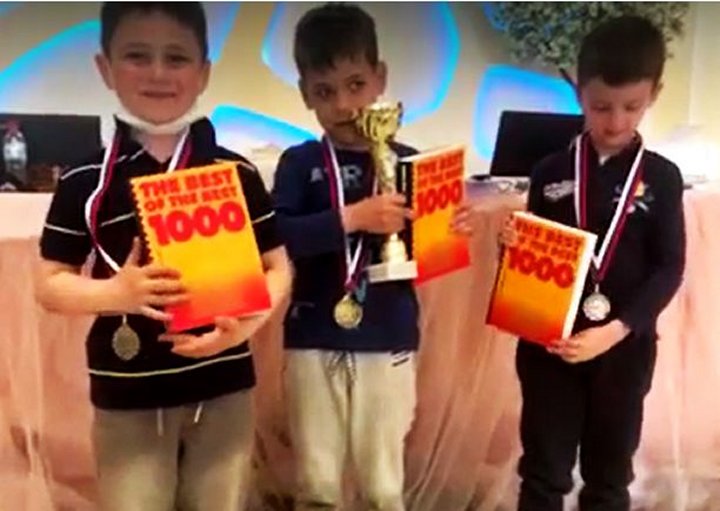 Beaming winners in the U8 category, clutching the Chess Informant’s ‘The best of the best 1000 games’, with Serbian Adamovic Nikola holding the cup after a perfect 9/9 score

The famous chess publication was honoured at the Festival with a dedicated qualifying rated blitz tournament ‘55 Years Chess Informant’ to celebrate its jubilee 55th year of existence. The finals were played on the 15th April with the Armenian GM Martirosyan Haik M emerging again a winner.

The Festival continues until the end of April with the GM and IM (two of each) closed round robin tournaments that would avail participants earning GM, IM, WGM and WIM norms.

If you have missed chess spring in Belgrade, you may be tempted by the next Champions Chess Academy’s offer. The preparations for the Belgrade Summer Chess Festival are in full swing and precise details will appear soon on their website.

Belgrade is an enchanting Balkan metropolis and Serbs are the most charming, friendly, down to earth people that left me with warm impressions since my participation at their first Belgrade Summer Chess festival of which I also compiled a YouTube video. 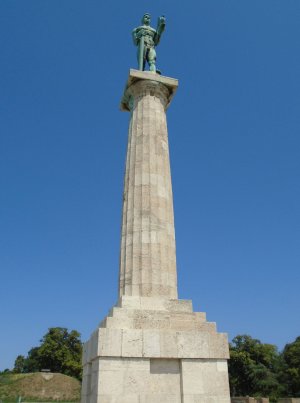 Diana Mihajlova
A former university lecturer in Romance philology, she is currently a painter as well as a chess journalist, and reports regularly from the international tournament scene.
Discussion and Feedback Join the public discussion or submit your feedback to the editors
We use cookies and comparable technologies to provide certain functions, to improve the user experience and to offer interest-oriented content. Depending on their intended use, analysis cookies and marketing cookies may be used in addition to technically required cookies. Here you can make detailed settings or revoke your consent (if necessary partially) with effect for the future. Further information can be found in our data protection declaration.