4/20/2021 – Fabiano Caruana defeated former co-leader Maxime Vachier-Lagrave in round 8 of the Candidates Tournament, once the event resumed a year after having been postponed due to the sanitary crisis. Caruana played a sharp novelty out of a Najdorf Sicilian and eventually got a slightly superior endgame, which he turned into a remarkable victory. In the other decisive game of the day Kirill Alekseenko defeated Alexander Grischuk. Ian Nepomniachtchi is now the sole leader of the event. | Photo: Lennart Ootes

The eight-player Candidates tournament is one of the most prestigious global chess events, held every two years. The event will determine who will challenge the defender Magnus Carlsen for the title of the World Chess Champion.

All the results from round 8:

A crucial encounter finished decisively in the first round of the second half of the Candidates Tournament, after the pandemic forced the organizers to postpone the resumption of the event for over a year. In the main game of the day, Fabiano Caruana climbed to shared second place with a win over former co-leader Maxime Vachier-Lagrave.

Caruana, who was the last player to challenge Magnus Carlsen for the world crown, got a chance to play a sharp novelty against MVL’s Sicilian Najdorf. As stated by the American, his opponent found correct continuations once and again despite having been surprised in a highly complex position. Exhaustion and stress, however, seem to have played a role in the long endgame that ensued, as the Frenchman could not hold a draw from a theoretically balanced but difficult-to-play setup.

A visibly frustrated Vachier-Lagrave analysed a number of variations with his opponent in the post-game press conference. The French star is now tied in second place with Caruana, and enters the last 6 rounds of the tournament with a worse tiebreaker than his American rival (the direct encounter result is the first criterion to break a tie). Both currently stand a half point behind Ian Nepomniachtchi, who drew Anish Giri with the white pieces on Monday.

Caruana’s victory was not the only decisive result of the day, as Kirill Alekseenko needed even more time to take down his compatriot Alexander Grischuk with the white pieces. Grischuk got a good position after surprising commentators and spectators alike by playing the French Defence. The fan favourite over-pressed in the endgame, though, and ended up losing while an exchange up against Alekseenko’s active king and far-advanced passed pawn.

Wang Hao and Ding Liren drew their game rather quickly after playing a deep theoretical line of the Scotch Defence. 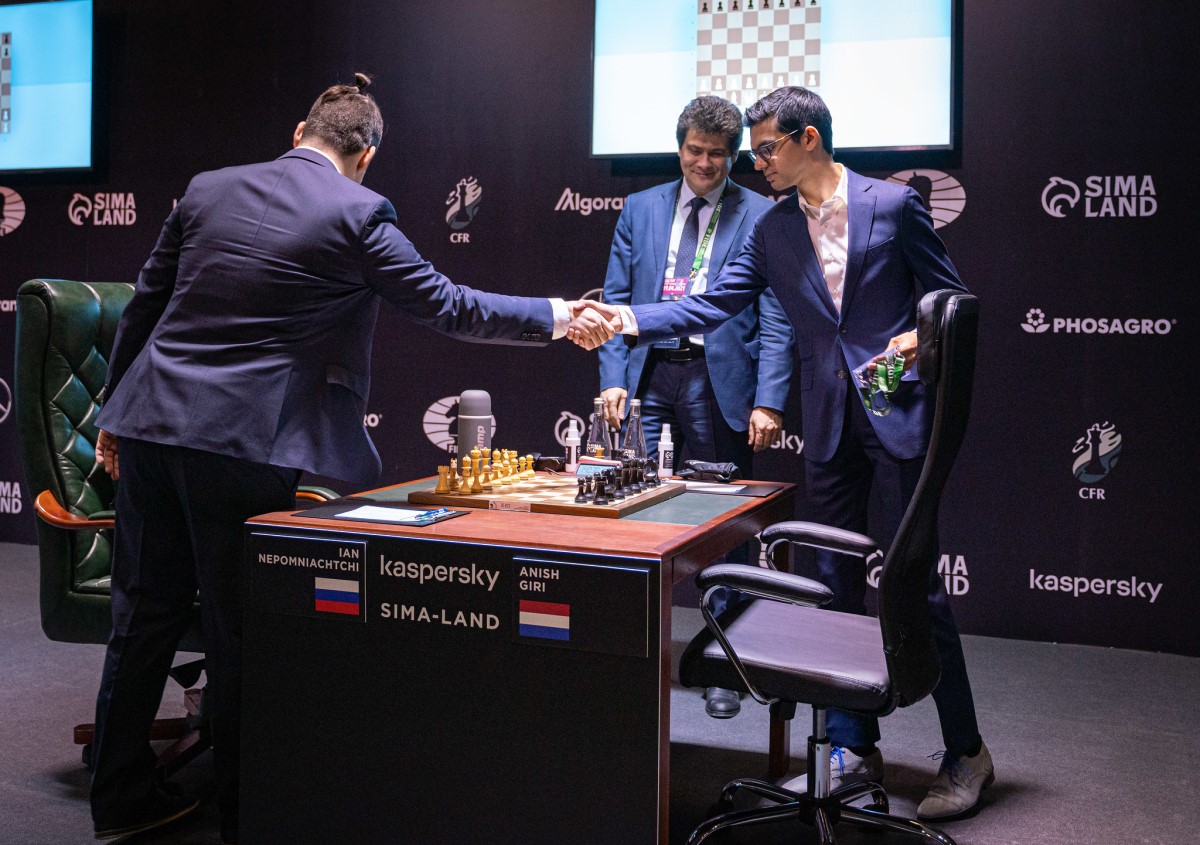 Handshakes are back | Photo: Lennart Ootes

As he has repeatedly done in the past, Vachier-Lagrave stuck to his guns and played his pet Sicilan Najdorf with black — despite knowing all too well that he was facing one of the strongest theoreticians in the world, who had a whole year and a powerful team of seconds to prepare for this very opening. As Olimpiu G. Urcan tweeted:

Love is stronger than pain: Maxime Vachier-Lagrave’s loyalty to his Najdorf is admirable.

It was Caruana who uncorked a novelty, and a shocking one at that.

This Najdorf-DVD is suited for the beginner as well as experienced club players. Pelletier presents a classical repertoire that’s easy to learn and covers all you need to know about the Najdorf.

White blitzed out 19.Bc4. While Caruana continued to play his moves almost instantly, MVL had already spent almost 20 minutes on move 18. Moreover, after accepting his opponent’s sacrifice with 19…Qxc4 he needed almost half an hour to find a satisfactory response to the menacing 20.Bd6.

Black considered 20…f5, but correctly (as Caruana said later) opted for 20…Nf6. Magnus Carlsen, who was commentating the games live, thought that the game might end quickly, but the Frenchman showed why he is considered one of the strongest grandmasters in these positions, as he managed to find a way out to enter a difficult yet holdable endgame:

In the press conference, Caruana suggested that Black could play the unattractive 26…Ra7 here, which the engines also consider to be the best move. Vachier-Lagrave went for the more human 26…Ne4 and thought he had excellent chances to hold the balance.

The Frenchman was not wrong, as even the rook and pawn versus knight and pawn ending that was reached on move 50 was a theoretical draw.

Of course, White can put pressure on his opponent endlessly from this position. Vachier-Lagrave, who came from surviving a tough surprise in the opening, eventually faltered and had to resign on move 74.

Caruana mentioned that the opening idea had been discovered by Rustam Kasimdzhanov, and that they had it in store “for quite a while”. 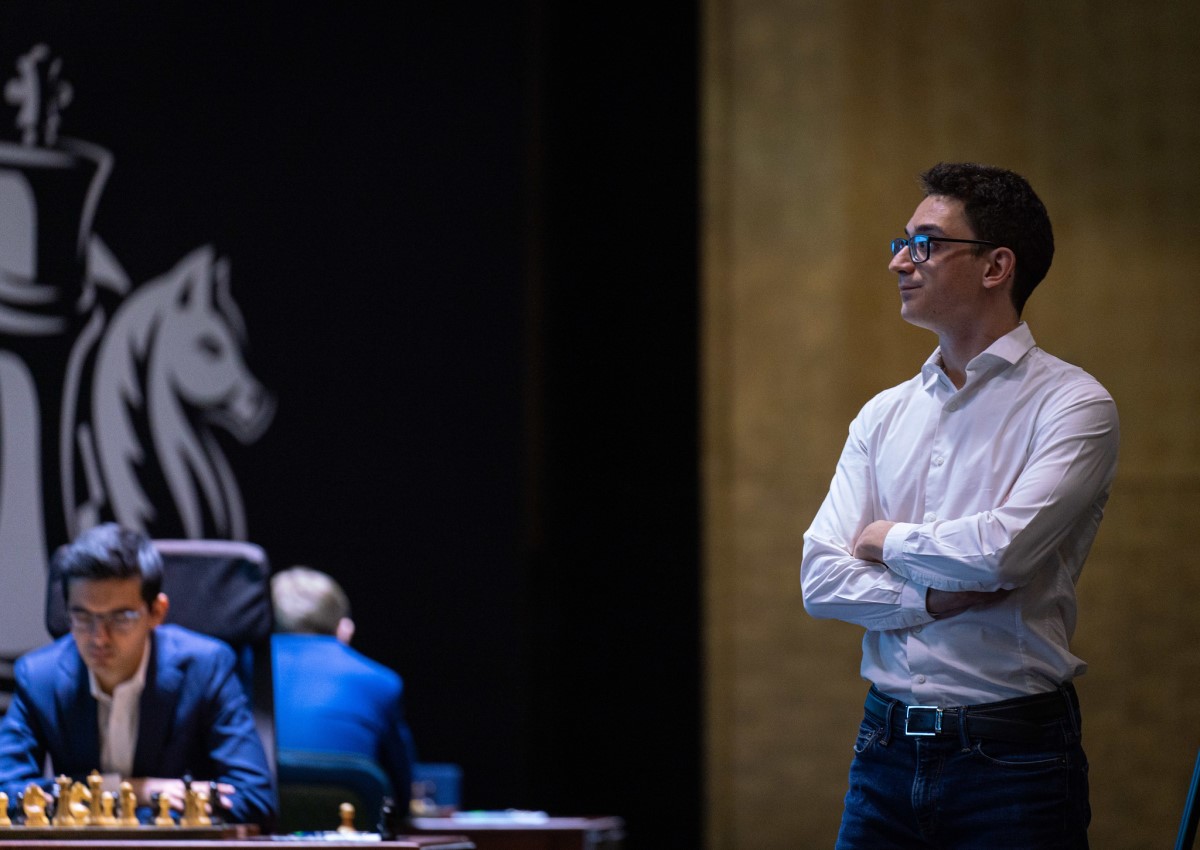 Before the event was postponed last year, Nepomniachtchi had lost a crucial encounter against MVL after playing the French Defence with black. Nepo had also responded to 1.e4 with 1…e6 in round 3 against Alekseenko. However, no one expected for the other Russian in the field to play this defence in round 8.

Grischuk’s choice surprised the commentators and gave him a large advantage on the clock against his compatriot — a strange occurrence for one of the biggest time-pressure addicts in the circuit. Black also had a good position:

Black had the bishop pair and a very stable structure. In hindsight, Alekseenko’s 22.c4 here proved to be a good practical decision, as he went on to activate his pieces quickly — including his king — avoiding having to manoeuvre passively against a player as experienced as Grischuk.

At this point the engines still give Black a slight edge, but there is plenty of play left in the position. In the ensuing complications, apparently Grischuk could not adapt well to the new situation on the board and rejected lines that led to force draws, which, as often happens, created opportunities for his rival.

Endagme specialist Karsten Müller took a closer look at the endgame, starting from the position in which Grischuk erred decisively by moving his king to the wrong square. A fascinating example of how complicated chess actually is: 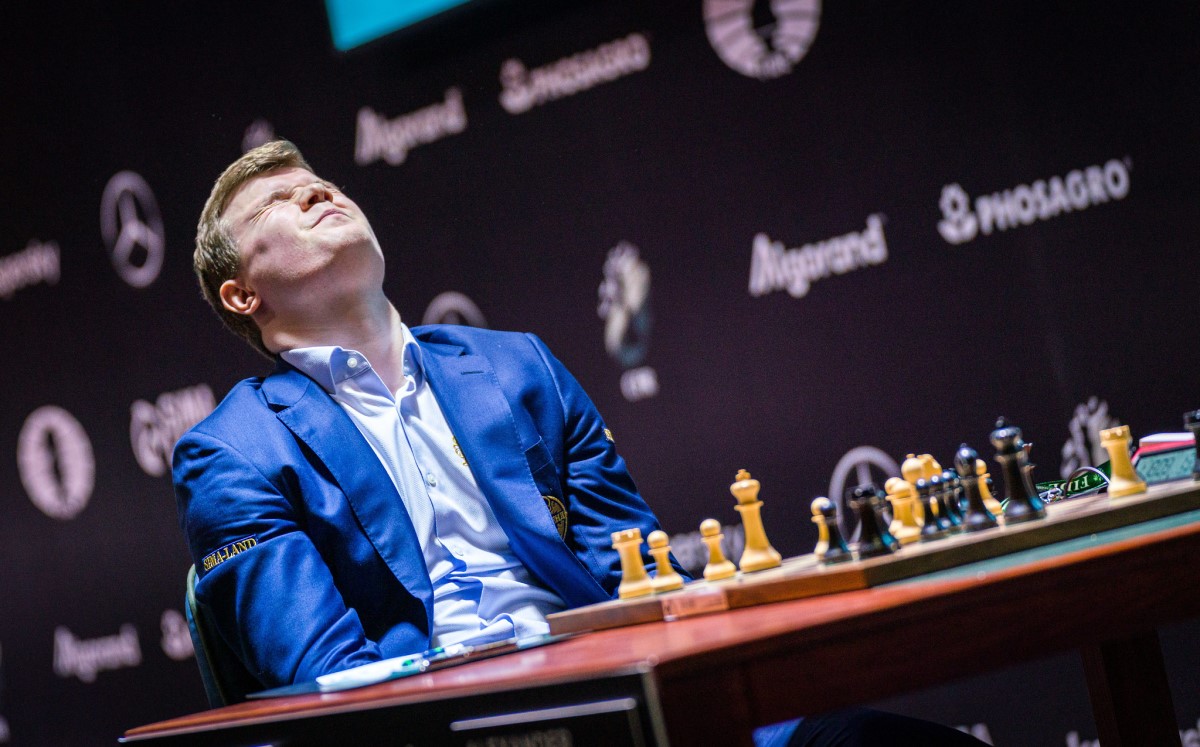 Jon Speelman recently noted that Giri has been playing more straightforward, aggressive chess with great results in the last few months. Against Nepo, the Dutchman played the Sveshnikov Variation of the Sicilian, and later quipped:

I did have one year to find an advantage for black after 1.e4, and I have to say I need a little bit more time.

Giri did not get in trouble, but played what Carlsen considered to be a slightly dubious 18…Be6. However, it was difficult for White to create something concrete. The contenders repeated the position starting on move 24 and agreed to a draw.

Always wanted to play like a World Champion? Search no further! With Magnus Carlsen using the Sveshnikov variation as his weapon of choice in the World Championship match against Fabiano Caruana, this DVD could not be better timed.

Carlsen was surprised that Nepo did not continue playing from this position, but the Russian later summed up what had transpired:

White achieved nothing out of the opening, and it was a quick draw. 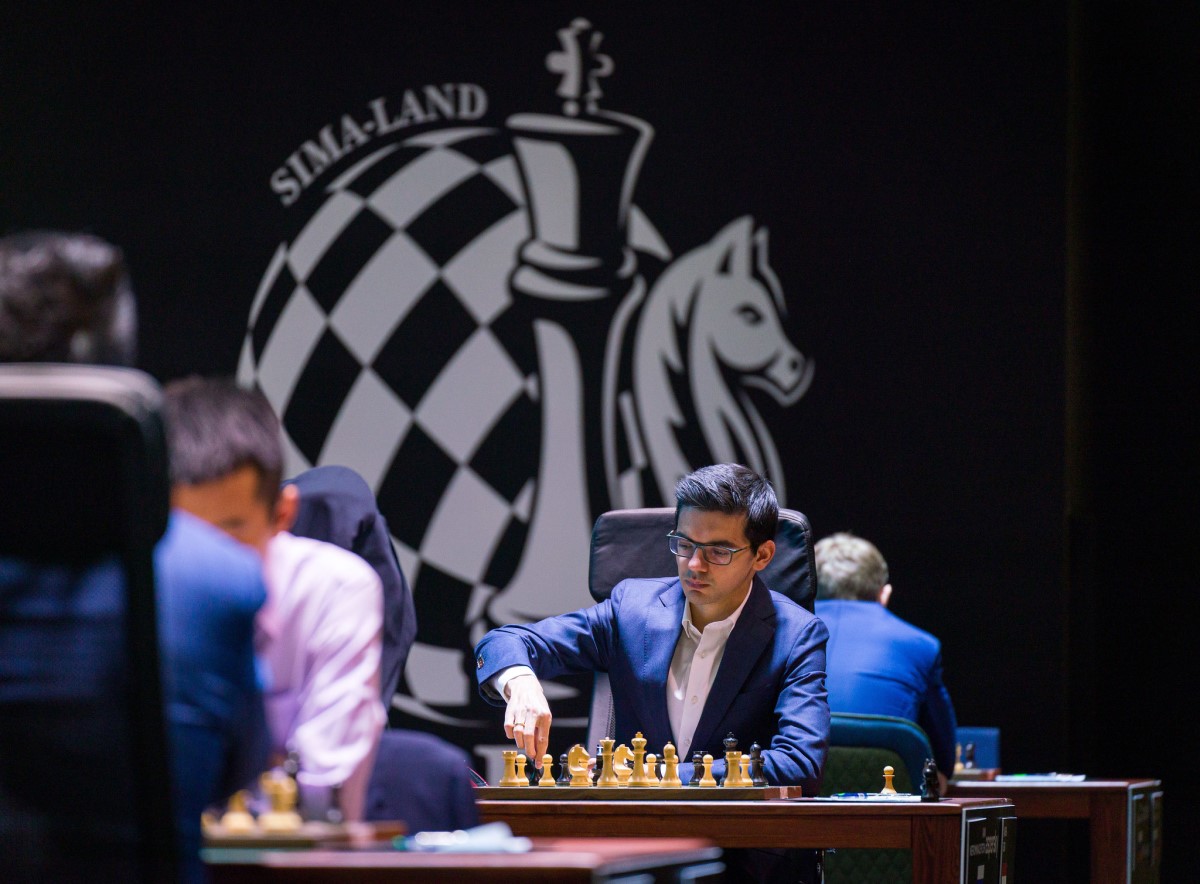 In the shortest game of the day, the Chinese representatives in Yekaterinburg played a theoretical line of the Scotch Defence before signing a 28-move draw. Wang talked about what he had done during the past year:

I didn’t consider it necessary to study chess for the whole last year, since I didn’t have any special invitations to online tournaments. […] I spent quite a lot of time studying and improving my knowledge in the field of investments. I am always happy to use new opportunities and learn something new.

In round 9, Ding will have white against Vachier-Lagrave, while Wang will have the tough task of facing Giri with the black pieces. 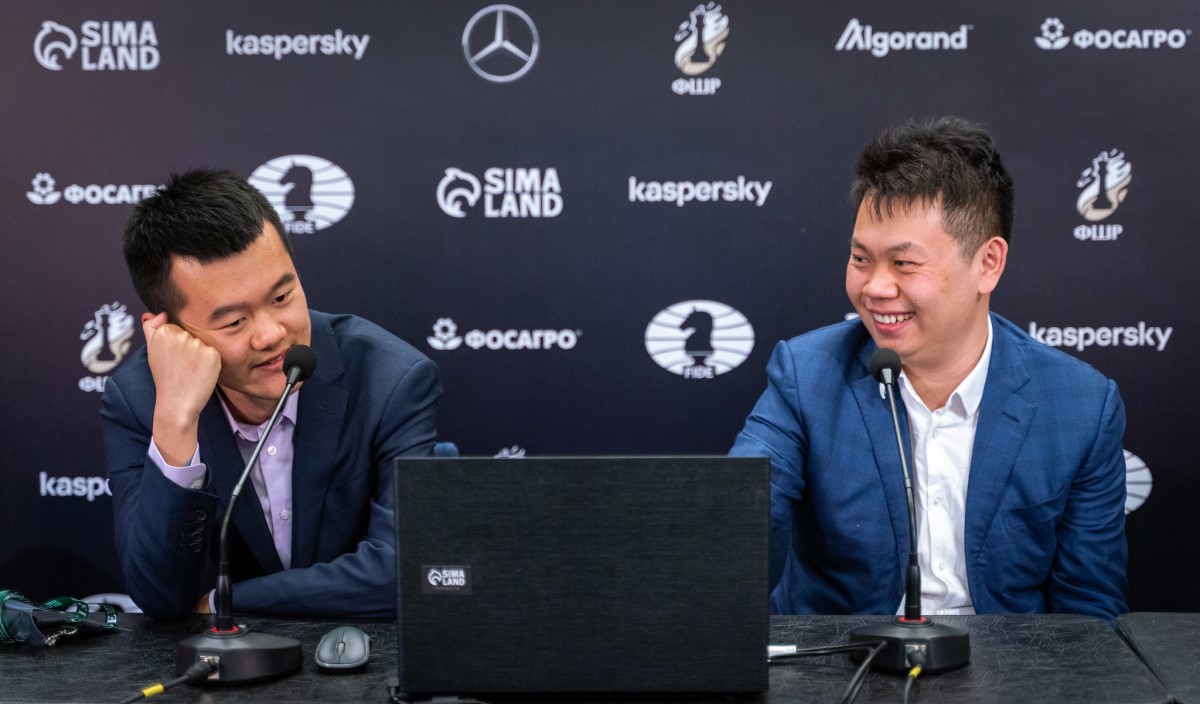