4/20/2021 – Anish Giri beat Wang Hao to climb to shared second place a half point behind sole leader Ian Nepomniachtchi at the Candidates Tournament in Yekaterinburg. Fabiano Caruana and Maxime Vachier-Lagrave are the other two players who make up the chasing pack, as they both drew their games in round 9 — while Caruana failed to make the most of his advantage against Kirill Alekseenko, MVL defended fiercely against Ding Liren. | Photo: Lennart Ootes

The eight-player Candidates tournament is one of the most prestigious global chess events, held every two years. The event will determine who will challenge the defender Magnus Carlsen for the title of the World Chess Champion.

All the results from round 9:

With five rounds left to go at the Candidates Tournament in Yekaterinburg, half the field is well in contention to become Magnus Carlsen’s next challenger. Ian Nepomniachtchi, who drew with black in round 9, is the sole leader, as he stands a half point above a very dangerous trio made up by Fabiano Caruana, Maxime Vachier-Lagrave and Anish Giri.

The last player to join the chasing pack was Giri, who convincingly beat Wang Hao with the white pieces out of an Open Catalan. The Dutchman played a subtle novelty on move 16 and took full advantage of Wang’s imprecise play and difficulty to handle the clock. Giri, who had a great performance in Wijk aan Zee and won the recent Magnus Carlsen Invitational, has continued to show his good form in Yekaterinburg.

In Wednesday’s tenth round, Giri will face Vachier-Lagrave in a key face-off. MVL scored a half point (out of two) after the resumption of the event, albeit after playing Caruana and Ding Liren in consecutive rounds — world’s numbers 2 and 3, who, in addition, had more than enough time to prepare their white repertoires. Against Ding, the Frenchman was lost going into a heavy-piece endgame, but a couple of imprecisions by the Chinese and a stubborn defensive effort allowed him to salvage the draw.

Meanwhile, Caruana missed a golden chance to catch up with Nepomniachtchi, as he got a great position with black in the middlegame against Kirill Alekseenko. Credit should be given to the Russian for achieving the draw, though, as he defended actively in the middlegame and showed good technique to hold the balance in the rook endgame. 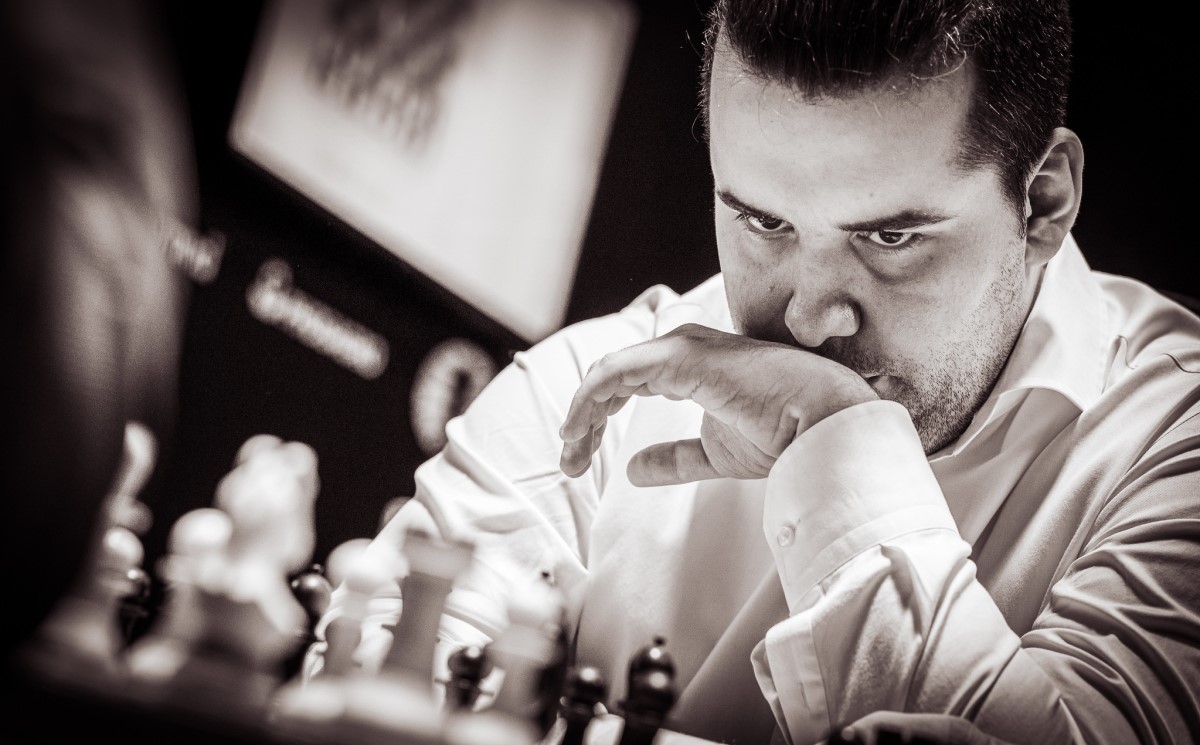 Home preparation once again proved to be crucial in this game. Unlike at the end of the 20th century — when the likes of Garry Kasparov often showed devastating forcing moves which led to straightforward victories — nowadays, it is more about getting your opponent out of his comfort zone, forcing them to constantly double-check their calculations while afraid of missing something their opponent checked with the computer that very morning.

In this case, although Wang did not get into much trouble positionally, he found himself clearly down on the clock once Giri’s pieces had reached near-optimal squares.

Power Play 24: A repertoire for black against the Catalan

On this DVD Grandmaster Daniel King offers you a repertoire for Black against the Catalan, based around maintaining the rock of a pawn on d5. Keeping central control ultimately gives Black good chances to launch an attack against the enemy king.

Unable to find an acceptable move, Wang weakened his kingside decisively with 27…g6. In the press conference, Giri suggested 27…Nd5, which is playable but dangerous due to 28.f5. Engines also give 27…Qe8 and 27…Kh7 as alternatives, since anyway it’s difficult for White to find a plan to make headway.

Here White played 33.Rc4, planning to double on the b-file, instead of 33.Qxb4 directly. Giri’s choice allowed 33…Rd1, which would have been a last-ditch attempt to create counterplay along the first rank. 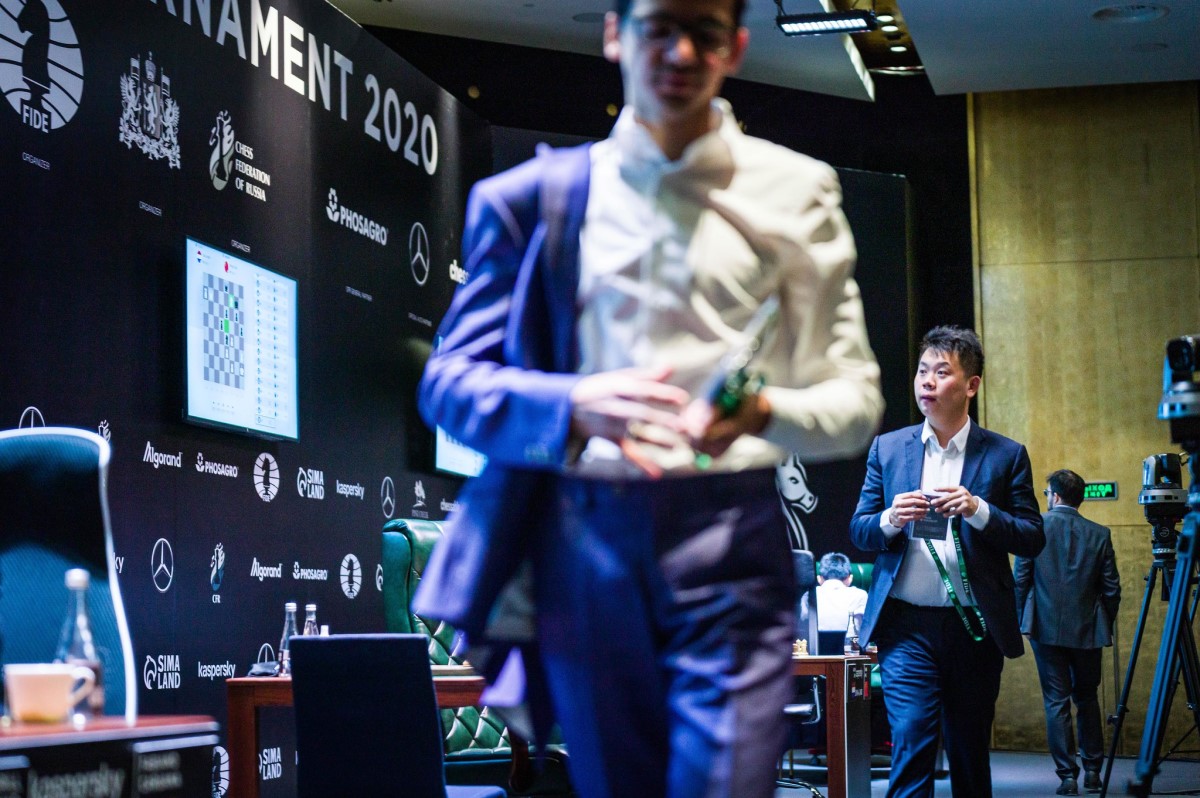 On to the press conference | Photo: Lennart Ootes

For a second day in a row, MVL found himself dealing with a dangerous piece sacrifice played by his opponent right out of the opening.

In the actual DVD Bologan covered all answers by Black against 3.Bc4, especially 3…Bc5, presenting all relevant possibilities for White.

Ding stunned his opponent with 15.Nd4. Unlike in round 9, however, Vachier-Lagrave shied away from going into the most critical line after 15…cxd4 16.cxd4 — the Frenchman played 16…0-0 instead of keeping his material advantage with 16…Nf7. Carlsen described MVL’s solution as “superficial at best”, as Black was clearly on the back foot from this point on.

White handled his advantage exemplarily, entering a clearly winning heavy-piece endgame with balanced material on the board. On move 37, however, Ding erred by trying to force matters with a pawn push.

Ding could have continued to create pressure against the e4-pawn with 37.Qc2 — a move that is not difficult at all for a grandmaster — but considered that it was time to force matters with 37.d6. Apparently, the Chinese star missed that Black has 37…Re6 38.Rd6, surprisingly defending ‘from behind’.

The worst had passed for MVL, but he still needed to find precise defensive manoeuvres until move 88 to hold the draw, as Ding continued to set up subtle tricks at every turn. 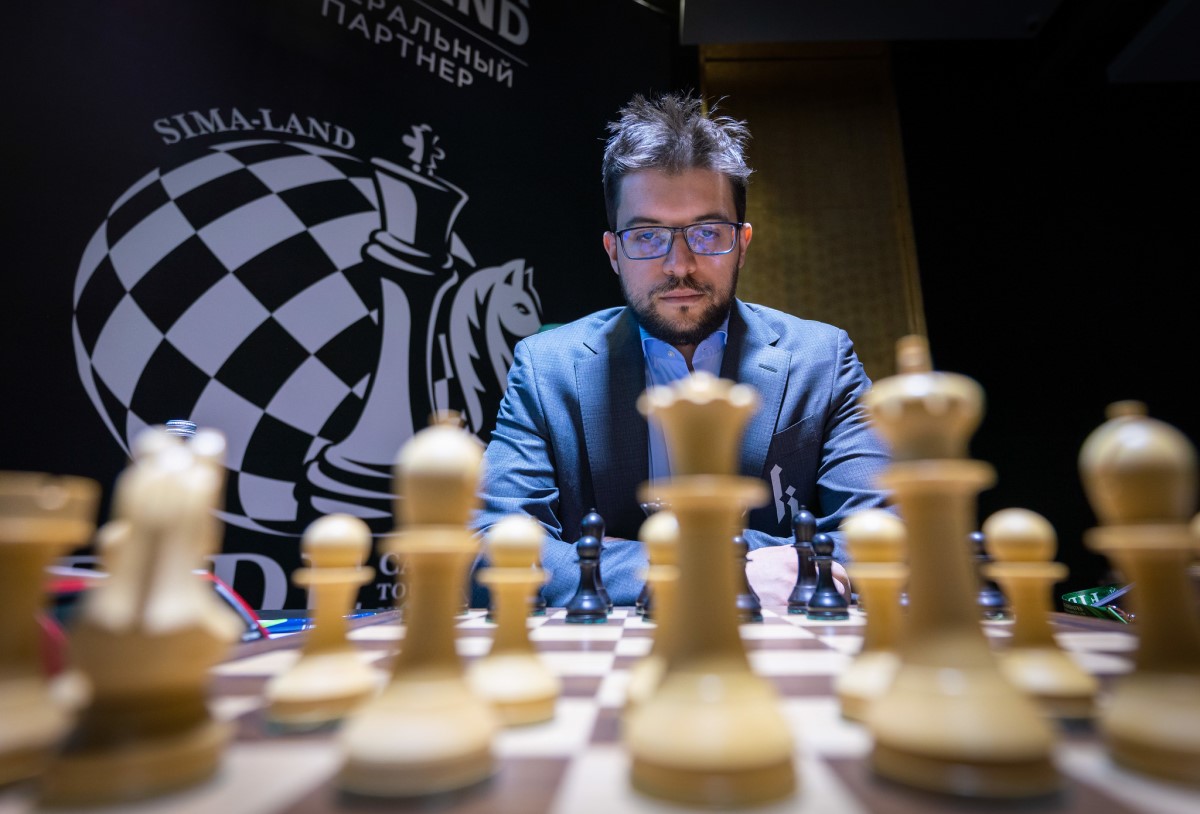 In the all-Russian clash, Nepo played the Grünfeld against his experienced rival. The queens left the board on move 18, and a battle of meticulous manoeuvres ensued. Not surprisingly, Grischuk got himself in time trouble. The position continued to be equal when Grischuk rejected to simplify the position in the most straightforward way available:

Endgames of the World Champions from Fischer to Carlsen

Let endgame expert Dr Karsten Müller show and explain the finesses of the world champions. Although they had different styles each and every one of them played the endgame exceptionally well, so take the opportunity to enjoy and learn from some of the best endgames in the history of chess.

Instead of the simple 26.Bxc4, which is also the engine’s first suggestion, Grischuk played 26.Rxf7. Nepomniachtchi spent almost 22 minutes on 26…Bxb3 (instead of the more trying 26…Bxf7) and the game ended in draw after 40 moves.

Karsten Müller looked into what would have happened had Nepo captured the rook on move 27, and commented, “In a human game all 3 results are possible, while objectively it should still be a draw”. Note that our in-house endgame specialist titled this game ‘No risk, no fun’! 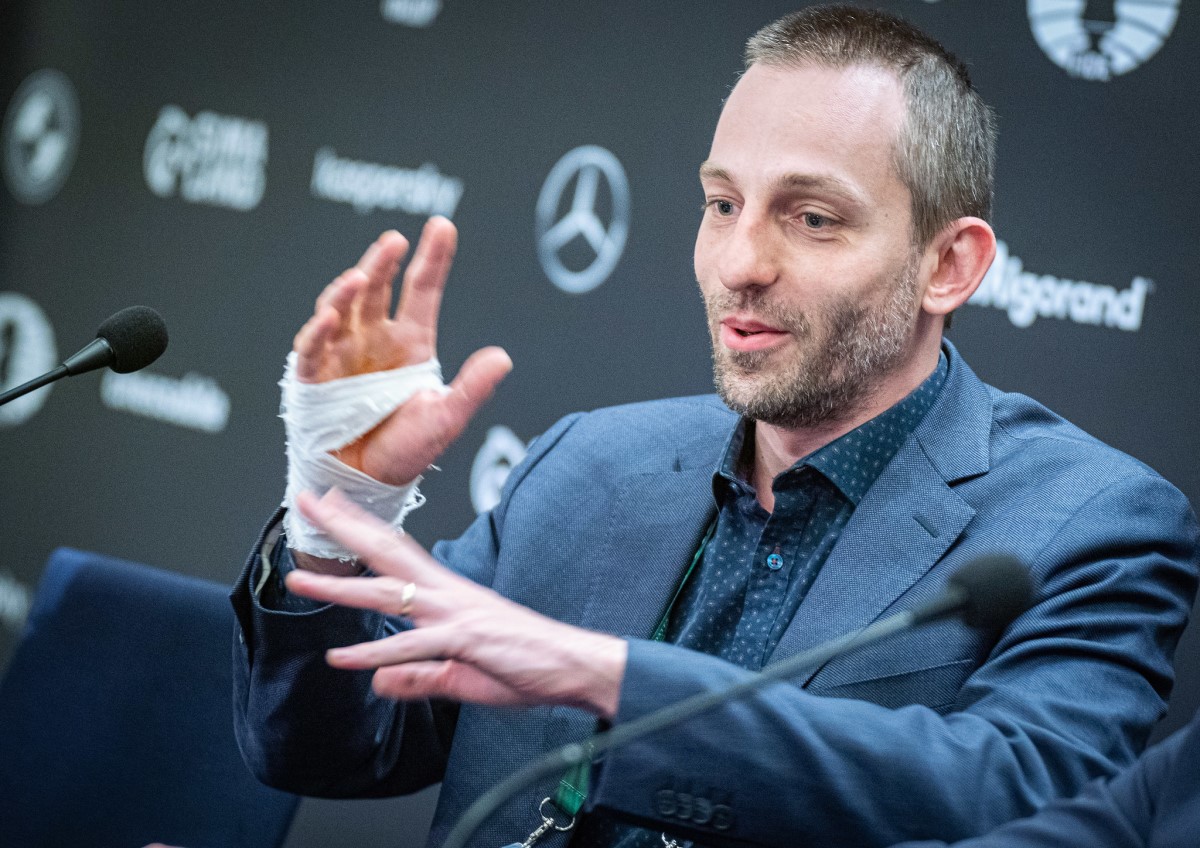 As Carlsen explained from the studios in Oslo, Alekseenko has shown he has what it takes to fight the top grandmasters in the field — although he has usually done it after being outplayed at some point in the game. This was the case in round 9, when the Russian chose a subpar plan in the early middlegame and found himself in a strategically inferior position against Caruana.

Caruana later mentioned that he was happy to have played 26…Rf7, as White is not well coordinated and Black has found the perfect way to activate his rooks. Alekseenko responded with 27.Bc1 and the American went for 27…Raf8, which turned out to be much too subtle in the long run — both Carlsen and Caruana mentioned that Black’s best chance to fight for a win would have been to grab the loose pawn on the queenside with 27…Nxa4.

Black continued to put pressure on his opponent, but Alekseenko was effective in defence. A draw was signed after 59 moves. 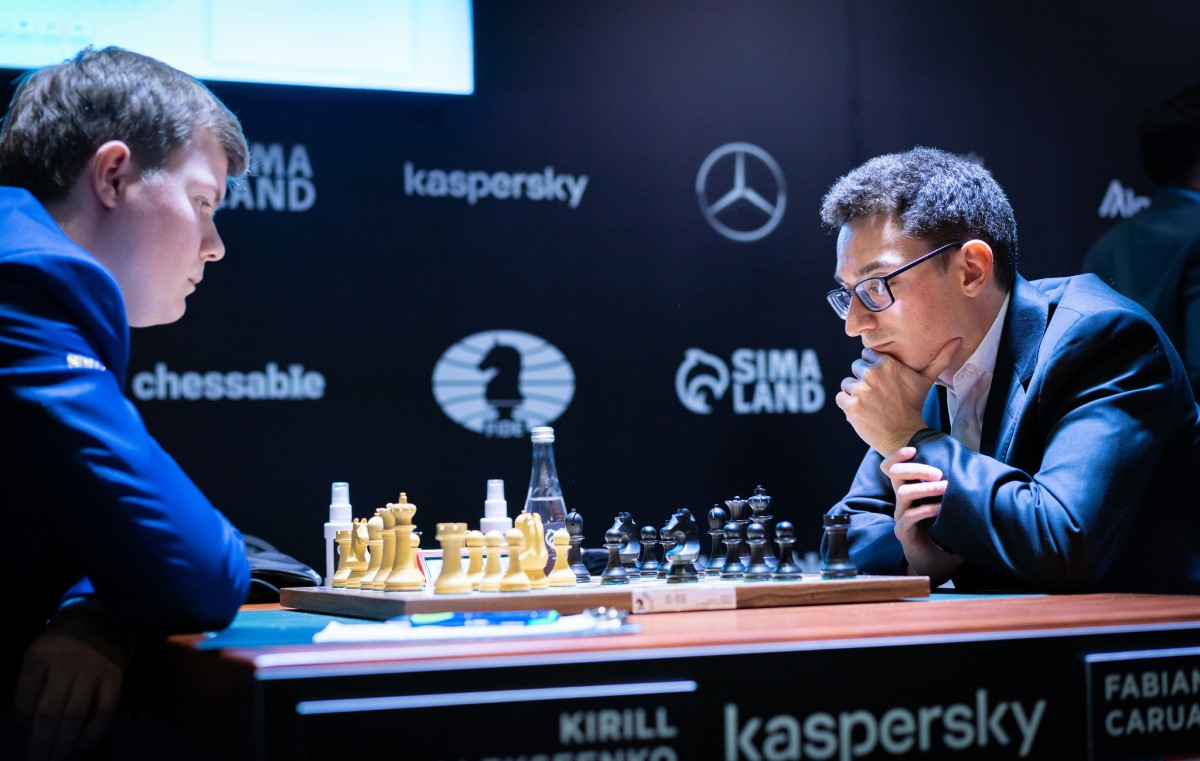