6/1/2021 – Magnus Carlsen won the sixth tournament of the Meltwater Champions Chess Tour after beating Wesley So in an exciting final match which was only decided in Armageddon. This was the third time Carlsen and So faced each other in a final of the tour, and So was inches away from scoring an unlikely third victory in a row. Meanwhile, Ian Nepomniachtchi defeated Teimour Radjabov in the match for third place.

Magnus Carlsen’s reaction, seen on his webcam, once he won the FTX Crypto Cup said it all about how tense the final match against Wesley So actually was. Both days, the American came back from behind in the rapid phase of the mini-matches, and he even won the first game of the blitz tiebreaker with the black pieces.

The world champion bounced back in the second blitz encounter and, for the first time in the tour, did not have the right to choose the colour in the Armageddon decider — he had, against all odds, won every single preliminary stage of the second online tour organized by his company. So, understandable, chose to play black in the sudden-death encounter, and was outplayed from the get go by the world champion.

Scarcely any world champion has managed to captivate chess lovers to the extent Carlsen has. The enormously talented Norwegian hasn’t been systematically trained within the structures of a major chess-playing nation such as Russia, the Ukraine or China.

Carlsen was ecstatic, as he jumped from his chair and celebrated effusively when his opponent resigned. The Norwegian later explained:

Nothing came easy at all, so that’s why it’s really satisfying to come out on top. I think both Wesley and I can play better, but it’s not really important to me right now.

Much earlier, Ian Nepomniachtchi had secured third place by beating Teimour Radjabov 2½-1½ in the second set of the match for third place. Responding to the criticism regarding the four quick draws they had signed in the first set, Nepo tweeted:

We live in newsy and interesting times. A lot of tournaments take place online, the qualifiers for the #FIDEWorldCup are held in a hybrid format. But some players have gone even further – they are trying to earn their spot in the #ChampionsChessTour via Twitter. #FTXCryptoCup

The players received both cash and bitcoin as prizes, with Carlsen getting US$ 60,000 and 0.6 bitcoin for his efforts. 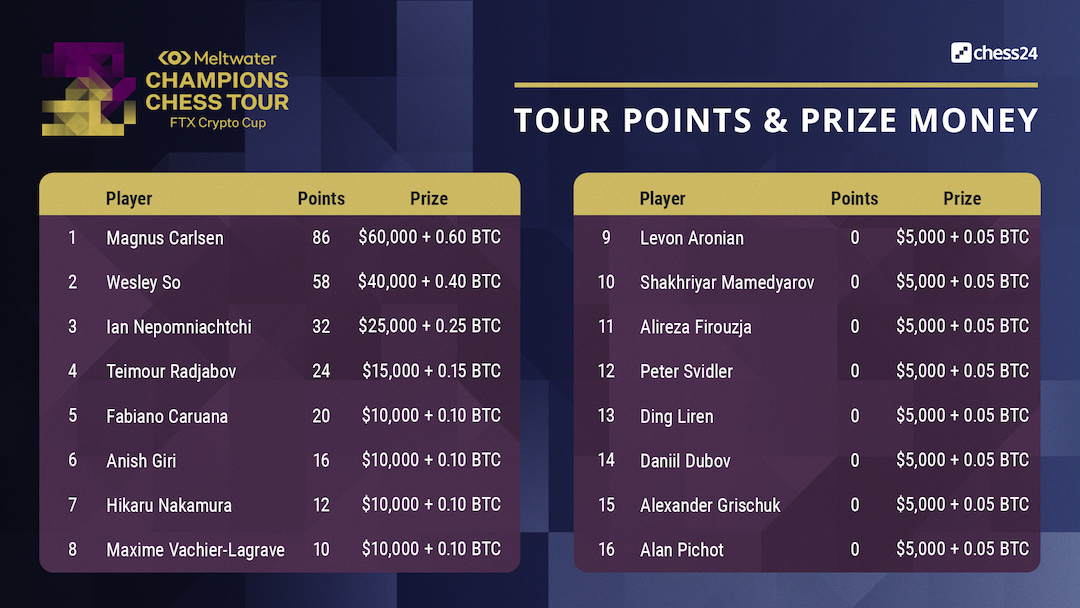 In the first game of the day, the world champion showed how positions with opposite-coloured bishops vastly favour the attacker.

Black is already busted here, and Carlsen proved it by completely paralysing the rook on b5 by playing 37.Bc7+ Ke8 38.Bb6. So resigned soon after.

The Filipino-born GM bounced right back, as he took full advantage of Carlsen’s haphazard play in the opening. The world champion was already in deep trouble when he tried to complicate matters on move 23.

My Black Secrets in the Modern Italian

The Italian Game is considered a sound but quiet opening without early trades, giving rise to rich positions where plans are more important than forced variations. So shows black’s plans on this DVD.

Carlsen failed to get much with white in game 3, while So decided to go for a quick draw in his last rapid game with the white pieces — despite having beaten the world champion in the last two games he got to move first.

A one-move blunder by Carlsen gave So a clearly winning position in the first blitz game of the tiebreak.

The world champ faltered with 27.Qxc5 allowing 27…Rc6 when he cannot play 28.Qxc6 Qxc6 29.Rxc6 due to back rank mate. White instead had to himself use his opponent’s weak back rank to keep the game going with 27.Rc3 and the fight continues. As it happened, So did not have any trouble converting his large material advantage into a win.

The drama continued as Carlsen managed to level the score with the black pieces in the next encounter, getting to defeat one of the most solid players of the elite circuit on demand. Finally, in the Armageddon decider, everything went the world champion’s way, with So getting an inferior position right out of the opening.

Replay all the games of the last day of action, including instructive analysis from GM Karsten Müller in the first encounter of the second set.

After the first-set debacle, the players gave it all in a fighting second mini-match. Much like in the final, the players traded blows with the white pieces in the first two games, but after Nepo again won with white in game 3, Radjabov could not make a second comeback, granting the World Championship challenger third place in the tournament.

GM Müller analysed Nepo’s first victory of the second set. Not all rook endgames are drawn! 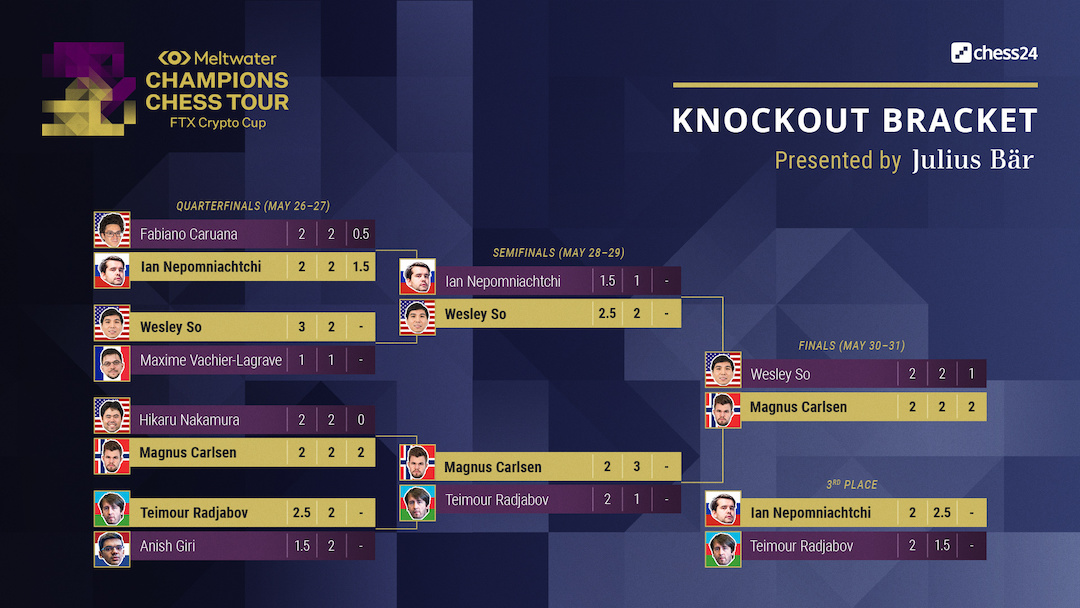