Home What's New Chess Logical: did you solve it?

Chess Logical: did you solve it? | ChessBase

5/19/2021 – It was a two-part task: from the reactions of students to a Zen master’s whispered hints, they try to deduce which piece he is thinking of. In the second part you have to solve a chess study with a uniquely different drawing strategy. Very strong players all over the world joined in our experiment – most failed to solve the Logical. Here at last are the solutions – kind of.

If you have difficulty with the solution to our Zen Logical, here’s a little warm-up task that might help you understand the process:

Two logicians go to a cafeteria. The waitress comes to their table and says: “Coffee for both of you?” The first logician says “I don’t know,” and the second says “Yes.” What does each want, and how did they figure it out?

The logical problem we published two weeks ago was created by Christian Hesse, and is typical for his way of thinking. A Zen master visits a chess club and sees two students studying a chess position with the following material on the board:

The Zen master thinks of one piece and whispers some information into each student’s ear. He tells Kaito which piece type he is thinking of, and Toshi the colour of the piece. Toshi is the first to react: “There is no way either of us could deduce which piece you mean.” To which Kaito says: “Okay, now I know which piece it is!” Toshi: “Aha, then I know as well.”

The chess logical was a task for our readers: find out which piece the Zen master meant, and how Kaito and Toshi could deduce it. We asked that you do not post the solution in our feedback section below.

Now we want you to do exactly that. The solution will be added to this article, here, in two days (Friday, 21th May, 2021). We will then quote from the most interesting solutions.

Having said that, we can tell you that so far many world-class players have been unable to find the answer to the Logical. With that they have helped us collect data for our attempt to answer the question: Are chess super-talents generally smarter than regular kids? So far only two young talents have given us the correct answer. And grown-ups? John Nunn solved it almost immediately, Ken Thompson too, followed by Vishy Anand. But not many more. 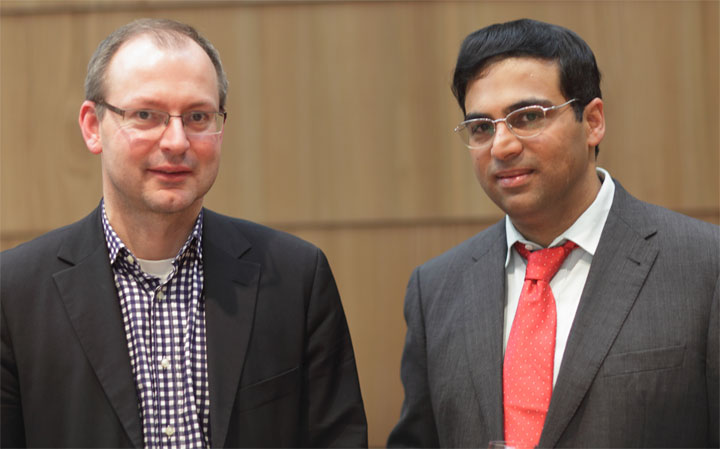 Professor Christian Hesse with one of the successful solvers

The second task for our readers was to solve the study on the chessboard. It was given to us by Dr Karsten Müller (to match the Chess Logical material) and is cleverer than it looks at first sight. Here is the full solution, nicely annotated by our problem expert Siegfried Hornecker:

Have you seen this kind of drawing mechanism before? We hadn’t.

Frederic Friedel
Editor-in-Chief emeritus of the ChessBase News page. Studied Philosophy and Linguistics at the University of Hamburg and Oxford, graduating with a thesis on speech act theory and moral language. He started a university career but switched to science journalism, producing documentaries for German TV. In 1986 he co-founded ChessBase.
Discussion and Feedback Join the public discussion or submit your feedback to the editors
We use cookies and comparable technologies to provide certain functions, to improve the user experience and to offer interest-oriented content. Depending on their intended use, analysis cookies and marketing cookies may be used in addition to technically required cookies. Here you can make detailed settings or revoke your consent (if necessary partially) with effect for the future. Further information can be found in our data protection declaration.