The excitement of the 2022 Chess Olympiad continues. We are four days in, and the event continues to provide some thrilling match-ups. Meanwhile, the Chessable team is really enjoying the sights and sounds of Chennai.

Be sure to check out our prior coverage of the event:

Also, be sure to check out our Olympiad course, featuring tactics and a breakdown of each day’s most important happenings, exclusive for Chessable Pro members.

Day 4 of the Olympiad started well – we bumped into our first author on the way into the venue. GM Alex Colovic is in charge of making sure the players play fair – a very busy job!

And it wasn’t long before the b3 cowboy himself joined us in the booth – stay tuned for an exclusive interview with him. 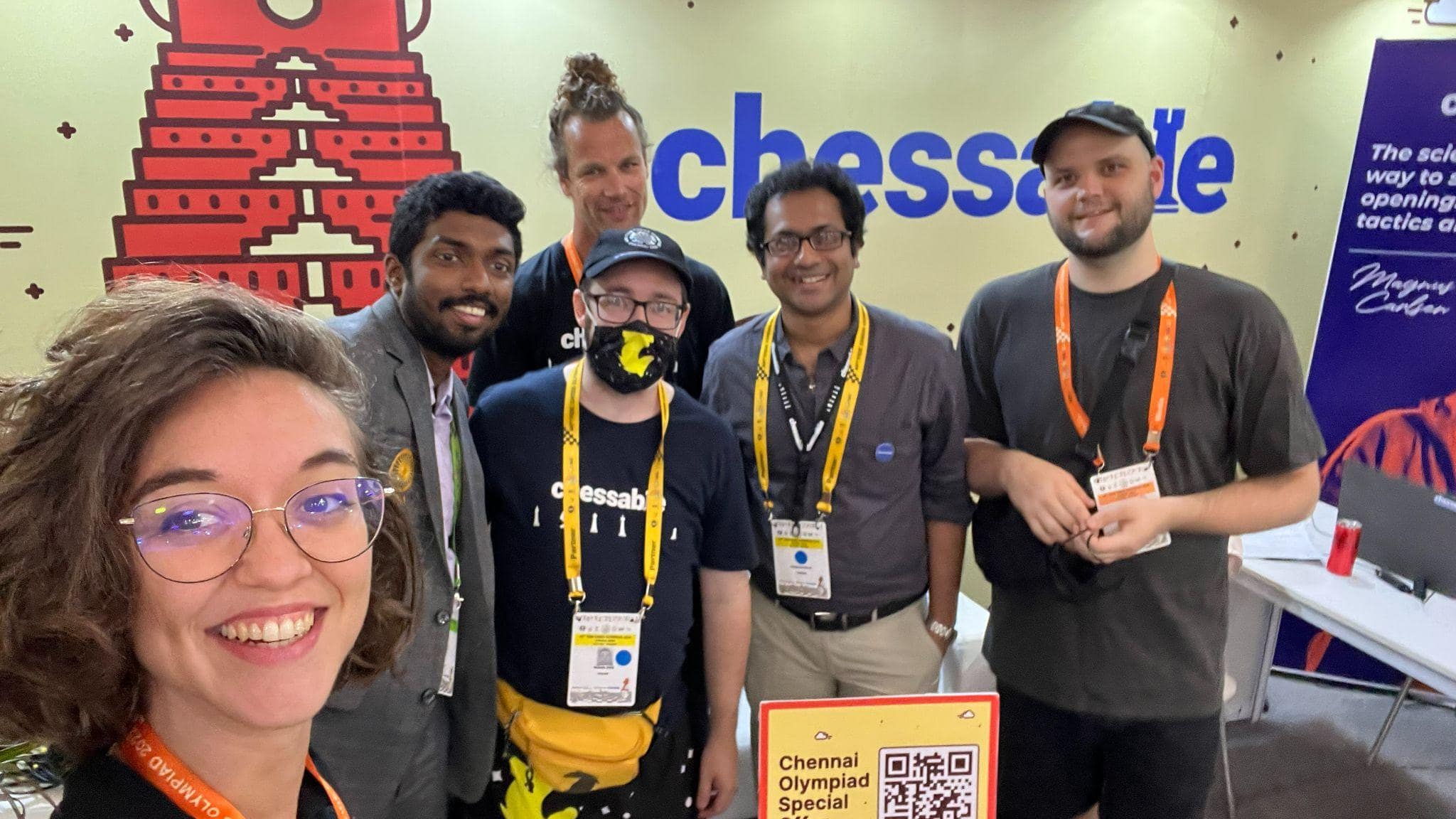 Adhiban wasn’t the only chess legend to drop by today, as prestigious MrDodgy Invitational 2.0 finalist Baadur Jobava came by too. 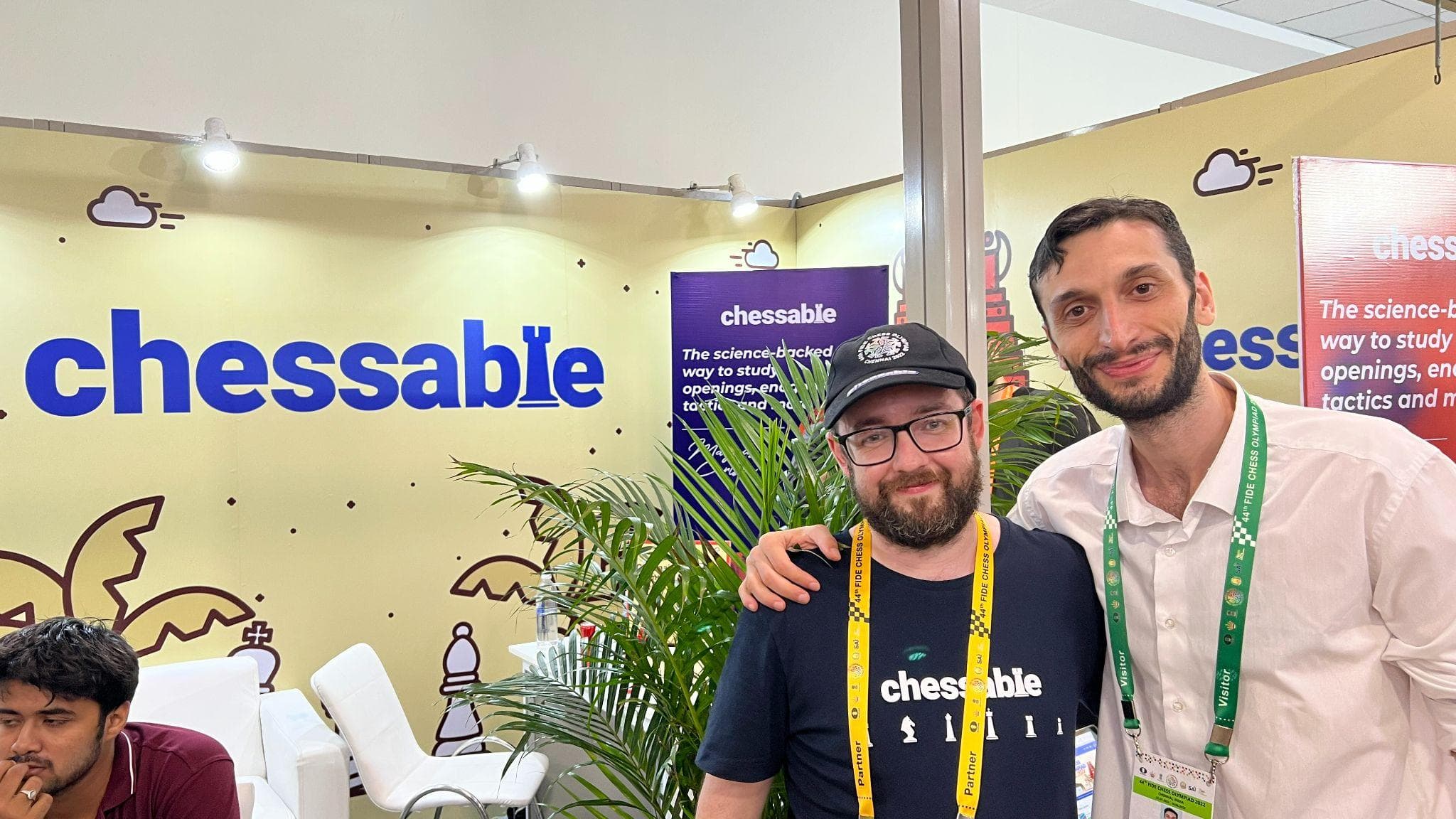 And even Eugene Torre appeared!

And, of course, Able remained the star of the show!

If you’re looking for a selfie or an autograph with a chess superstar, Chennai is definitely the place to be!

What happened in the games of the day?

The US team is struggling in this tournament The number-1 seed going into the tournament looked like favorites for many, but they will really have to turn things around going forward if they want to win the gold.

First board Caruana lost to 17-year-old Nodirbek Abdusattorov of Uzbekistan. It was nearly utter disaster for the USA team, but in the end, they squeaked by with a draw.

There are only five teams left unbeaten: India 2, England, Spain, Armenia, and Israel. Israel is the real surprise of this bunch, getting an upset win against a strong Dutch team in the fourth round.

These are how the standings look after Round 4:

Caruana was a couple of pawns down in a tough-looking position, but on move 44 he had a possible tactical combination to save himself. However, he failed to find this and played 44.Qxf5??

If White had played 44.Rd7, Black could really fall into some trouble, and the engine gives an extremely slight advantage to Black only.

All credit to the young Uzbek though, he is a rising star with a rating of 2688. It is the second time he has defeated Caruana, as he got a win over the US Super-GM in the 2021 World Rapid Championship, which he went on to win.

Number-4 seed Spain is having an excellent tournament and is proving they are a force to be reckoned with.

David Antón got the only win of the round against Abhijeet Gupta.

31.Ra5? Presumably to stop Black’s passed pawn. However, Black can defend with …Be8, the top engine move, which Antón found. White’s rook on the a-file is now extremely passive.

A blunder in the Women’s Section

Sophie Millet of France had been dominating the game as White against Jovana Eric of Serbia. However, in the following position, Millet made the fatal blunder of 35.Re4??.

However, Eric missed this, and Millet was able to recover after 35…Qc7? and went on to win the game.

Gundavaa settles for a draw

The Norwegian team nearly lost again in Round 4 against Mongolia, despite Magnus Carlsen’s win.

Norway got a bit of luck as Aryan Tari and Bayarsaikhan Gundavaa reached a draw due to repetition. Tari is rated 170 points higher than Gundavaa, and Gundavaa only had 8 minutes on the clock when the three-fold repetition was made.

However, White was completely crushing according to engines.

Check out a few photos from the 4th Round!

A Foundation for Beginners Seventy Six