Last week we reported on the Return of the FIDE Candidates Tournament, which will determine who will be Magnus Carlsen’s next challenger for the title of World Chess Champion. We have major news today as we see Chessable make new moves with FIDE.

We are very excited to reveal news of an historic new partnership between Chessable, chess24 and FIDE, the International Chess Federation.

Sponsors of the World Chess Championship

Chessable is now one of the main sponsors for the World Chess Championship cycle. Sister company chess24 will become a broadcast partner from 2021 until 2026.

Chessable, the world’s leading chess E-learning platform, has entered into a six-year commercial sponsorship of the chess world championship cycle, strengthening the brand’s position as the preferred E-learning choice among chess fans and top players alike by partnering with the International Chess Federation. The agreement covers different areas, including youth programs, professional chess, and broadcast rights for top events, but also education and social activities.

Chessable CEO David Kramaley: “We see great potential in helping to realize the chess world championship cycle for the hundreds of millions of chess fans in the world. Since 2015, Chessable has communicated a love of science-backed learning, celebrating chess education and curiosity. The chess world championship cycle is the perfect fit for this concept, as it showcases the world’s best players, many of whom are already published Chessable authors, playing for the ultimate title, showing what they know.”

In addition to sponsoring the chess world championship cycle, Chessable will partner with FIDE for a new chess talent development program, the FIDE Chessable Youth Development Fund, to which it will contribute $150,000 annually. The agreement is part of Chessable’s global growth strategy and another step in its mission to make chess a sustainable career choice for all.

FIDE President Arkady Dvorkovich: “We are extremely proud to be able to create new opportunities for the chess youth of the world through this new talent development program in partnership with Chessable. We hope it will help foster many new champions and attract many new young people to the game.

“Such a long-term partnership shows a strong commitment and a shared vision between both parties. The agreement will allow FIDE to grow and plan for the future, strengthening different areas. This helps to consolidate our top events even further, and many social projects as well as the chess in schools programs are about to take off. Chess is a great game to learn for any child, and has a proven track record of improving children’s cognitive and educational skills.”

Since launching in 2014, chess24 has demonstrated its continued commitment to promoting chess. It was the first international chess company to take chess broadcasting to a worldwide audience and it continues to innovate in this field. With this agreement, chess24 will become one of the broadcast partners for the world chess championship cycle as well as major FIDE events such as the World Rapid & Blitz, World Cup and Chess Olympiad.

Chess24 CEO Gerald Tan: “Broadcasting and commentating on chess tournaments has always been core to our activities and passion at chess24. Over the last year, we have made significant strides in developing new ways to bring chess to a wider audience with our Champions Chess Tour broadcasts and are excited to apply our insights to the World Chess Championship broadcast in 2021 and beyond.” 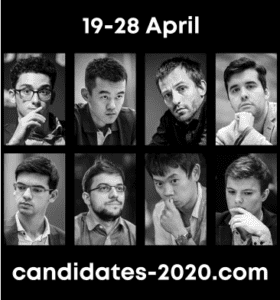 The partnership becomes effective immediately, and this means Chessable is one of the sponsors of the Candidates Tournament that resumes today in Yekaterinburg.