The 4NCL Finale took place last night and one of our Chessable White Rose teams was in the thick of the action.

Two weeks ago, we reported on the semi-finals of the Four Nations Chess League (‘4NCL‘), with news of narrow defeats for Teams One and Two but a fine victory for Team Three. This resulted in one more match for Team Three, against Charlton Cobras A, in the big final of Division 5.

It proved to be a very tough match and, despite valiant efforts all round, our outgunned team slipped to a 1-3 defeat.

Here are some interesting moments from each of the games.

This game brought the exceptionally rare sight of an un-castled Mooney king. The monarch travelled to c1 via f2, e2 and d2, a journey which left White under pressure. However, for one brief moment, David could have seized the advantage. 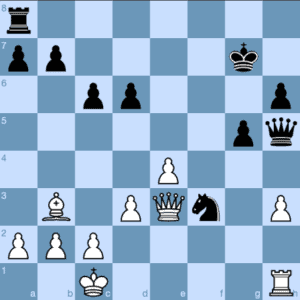 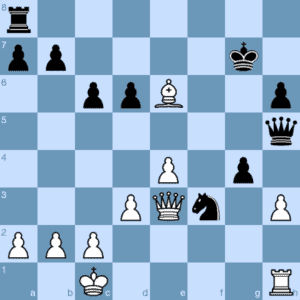 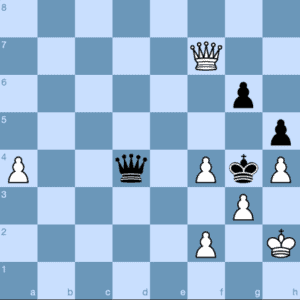 Jonathan is three pawns down but is trying to make the best of what he has left. He is close to forcing a perpetual check but the hopes are shattered by the accurate: 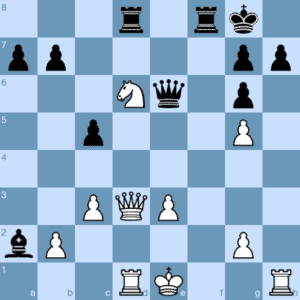 White’s king is very uneasily placed and this was exploited by 21…Rxd6! whereupon White resigned (0-1), as 22.Qxd6 Qxe3 checkmate ends resistance and anything else simply leaves White a piece down. 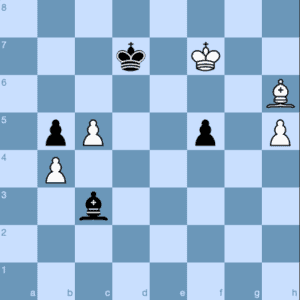 This was a fascinating battle, with lots of interesting twists and turns in the middlegame. The final twist occurs deep into the endgame.

Unfortunately for him, the position is now drawn as Black isn’t too far behind in the subsequent pawn race. After 52…Bxg7 53.Kxg7 f4 both sides obtained queens and there was no way White could escape from the checks long enough to make progress. The game was drawn after 68 moves.

From the diagram, a better way to continue is:

This keeps the f-pawn from advancing to f4 and Black will now be well behind in the pawn race. White will push the pawn to h7 with the simple plan of Bf6 to block the opposing bishop.

Congratulations to Charlton Cobras A on an excellent victory!

Thank you to all of the players and organizers involved in this season of 4NCL action. All of the results and games can be found on the official 4NCL website.

Play Through the Games