The evening brought excellent victories for all three of our teams.

Grandmaster Gawain Jones was back in action to take his place on board one. Together with James Adair, Kamil Plichta and Oskar Hackner, it all makes for a very formidable team indeed.

Gawain and James both won and Kamil and Oskar drew their respective games, to give our team a comfortable 3-1 victory over Spirit of Atticus A.

James finished off a kingside attack in fine style. 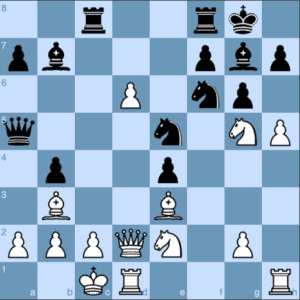 Advancing the h-pawn and exchanging it as quickly as possible is a standard method of attack against Black’s Dragon-like structure.

Ordinarily, the defending side would like to recapture with the f7-pawn to keep the h-file closed, but here it is pinned by the devious bishop on b3.

This looks logical as it blocks the path of the bishop. Unfortunately, the attack still rages -and James shows his creative side to prove it. 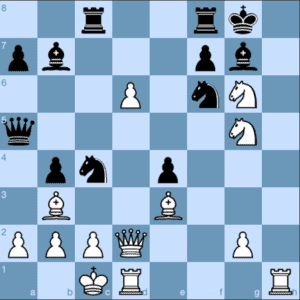 Compliant, but Black is in big trouble anyway. 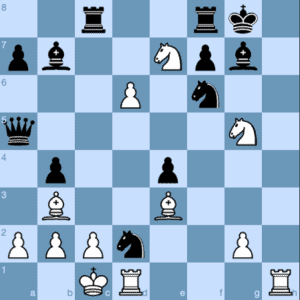 Team 2 produced an excellent team performance to beat Atticus A, 3.5-0.5.

Maaike’s intriguing ending of knight against pawns is worthy of a column all to itself, so we shall return to that one another time. 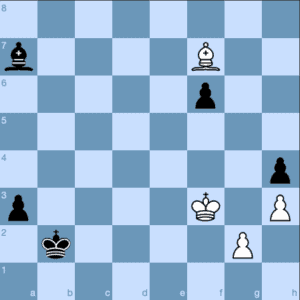 Black is clearly doing very well here and his next move looks, at first glance, to be the best, as it forces White to sacrifice the bishop.

Black is a whole piece ahead and it looks like an easy win from now on, but amazingly White can now hold the draw.

Of course, if White can trade off all of the pawns it will be a simple draw.

The Black king races back to the kingside.

The players agreed to a draw at this point. 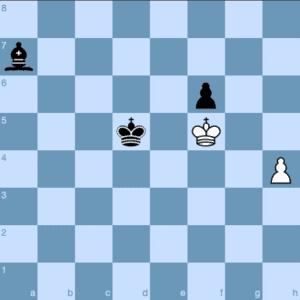 It turns out that the bishop cannot successfully multitask in this position.

The f-pawn must be defended, but the black king cannot approach it thanks to the white king. Black must play 63…Bd4 to defend the pawn, but then the h-pawn runs down the board. The black king cannot stop it, so it is another job he must leave to the bishop. Yet as soon as the bishops leaves Black’s sole surviving pawn undefended than White will capture it, leaving Black without any hope of winning.

A great save by Mr. Rothwell!

Going back to the first diagram, Graeme could have won by playing 57…Bb8 before advancing the a-pawn, ensuring the survival of his h-pawn and thus enabling him to win the game.

Team 3 outgunned Warley And Quinborne both in the average ratings and points as they cruised to a 4-0 victory.

David Mooney, Tom Wills, Alexandra Busuioc and Max Parkhouse were all good form as they proceeded to make it a clean sweep.

Max chased the black king out into the open and finished the game very efficiently. 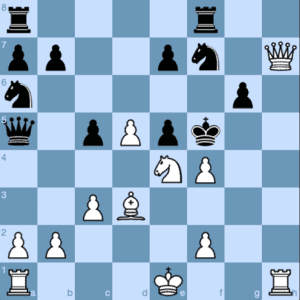 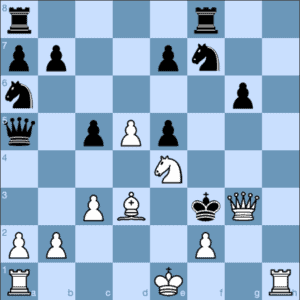 Team 1 is already in a commanding position in Group B of Division One. Warwick University, their closest rivals after the first two rounds, lost to CSC1, leaving Chessable White Rose 1 two points clear of the chasing pack and with a very healthy game points advantage to boot.

Team 2 still, still unbeaten, has climbed one place to third in Group C of Division One. Interestingly, they have the same game points as the two leading teams.

It was a great night for Team 3, who now top Division 5. They are the only team in the division still on maximum match points.

Our teams will be back in action on Tuesday 9 March. They are all in strong positions and must ensure their own very high standards are maintained.