3/7/2021 – In this week’s column, Jon Speelman looks deeply into “a real fire fight” in which 18-year-old Arseniy Nesterov came out on top after a terrific battle. In the game, the aggression was mutual and included extended hand-to-hand fighting!

When things kick off in a game of chess, the explosion generally lasts for just a few moves — or at least, without any real evidence, that’s my impression. But there are occasional games in which the violence runs and runs.

When this does occur, the most common scenario is probably a long attacking battle in which one player aims blows at the other’s head and the other finds heroic ways to defend.

But sometimes the aggression is mutual with extended hand-to-hand fighting, and today’s game is very much in this mould. It comes from the final round a week ago of the Moscow Open, which was won on tiebreak by Ivan Rozum ahead of six others.

The Queen’s Gambit Accepted: A Repertoire for Black

In this DVD Sam Collins presents a repertoire for Black based on the Queen’s Gambit Accepted, 1.d4 d5 2.c4 dxc4. Rather than get involved in the heavy theory of the Classical Main Line, the lynchpin of the repertoire is the active development of the queen’s bishop. The resulting positions have close similarities to the Nimzo Indian and Slav Defences, and Collins explains the way for Black to approach the middlegame with confidence based on a blockade and light square strategy. The resulting repertoire is solid, reliable, and suitable as either a main weapon or an occasional surprise choice. Video running time: 3 hours 30 min

One of the six was 18-year-old Arseniy Nesterov, who came out on top after a real fire fight!

16.d5! This and the next move scream out to be played to destabilise Black before his queenaside attack lands — 16…exd5 17.e6! 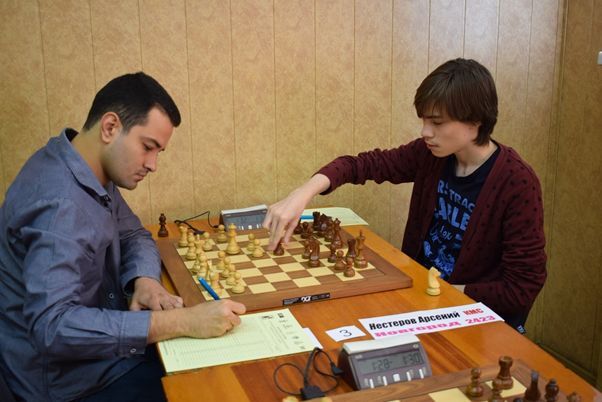 To finish up, a small tactical position I thought of earlier in the week. It’s fairly banal, but carries a small twist.

How to play the Ruy Lopez with Qe2

To avoid theory battles in well-known lines against Ruy Lopez (Berlin, Open Variation or the Marshall Attack), Sergey Tiviakov invites you into the world of an extraordinary early queen move for White: Qe2 â€“ elegant, effective and easy to learn!

Jonathan Speelman
Jonathan Speelman, born in 1956, studied mathematics but became a professional chess player in 1977. He was a member of the English Olympic team from 1980–2006 and three times British Champion. He played twice in Candidates Tournaments, reaching the semi-final in 1989. He twice seconded a World Championship challenger: Nigel Short and then Viswanathan Anand against Garry Kasparov in London 1993 and New York 1995.
Discussion and Feedback Join the public discussion or submit your feedback to the editors
We use cookies and comparable technologies to provide certain functions, to improve the user experience and to offer interest-oriented content. Depending on their intended use, analysis cookies and marketing cookies may be used in addition to technically required cookies. Here you can make detailed settings or revoke your consent (if necessary partially) with effect for the future. Further information can be found in our data protection declaration.