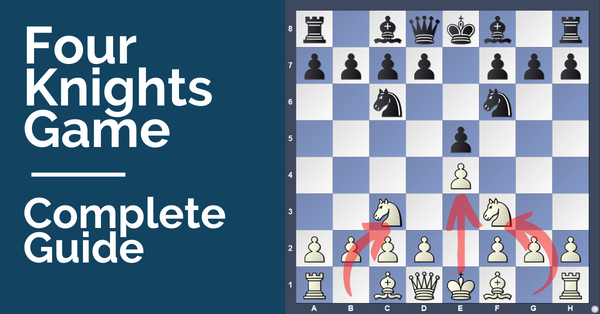 Four Knights Game is one of those openings that are popular at both beginner and grandmaster levels. It has solid positional ground and most of the time leads to calm positions.

At the same time, some lines are so sharp that it is not surprising that many strong and creative players favored the Four Knights Game. The list includes Magnus Carlsen, Alexei Shirov, John Nunn, Nigel Short, Wei Yi, and many others. 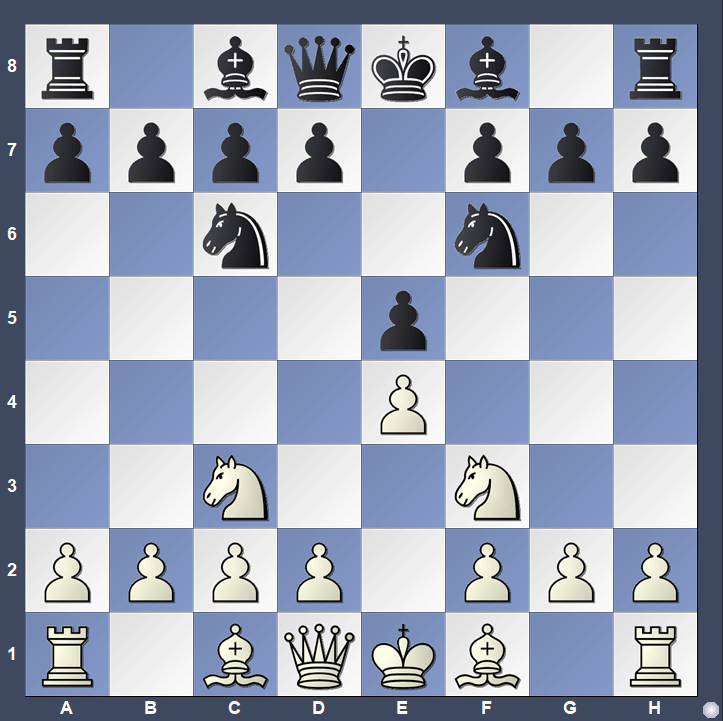 Both sides follow the basic opening rule to develop the knights first. Let’s note that this position can also arise via the Petroff Defense move order after 2…Nf6 3.Nc3 Nc6. If Black wants to avoid it, they can prefer 3…Bb4. This line will be discussed at the end of the article.

4.Bc4 is possible too, but it allows Black to equalize the game immediately with 4…Nxe4! Now the tempting 5.Bxf7+? Kxf7 6.Nxe4 d5 leads to a huge advantage for Black. Instead, White should stick to 5.Nxe4 d5 6.Bd3 dxe4 7.Bxe4 with equality.

4.Bb5 is traditionally the most popular move in the Four Knights Game. 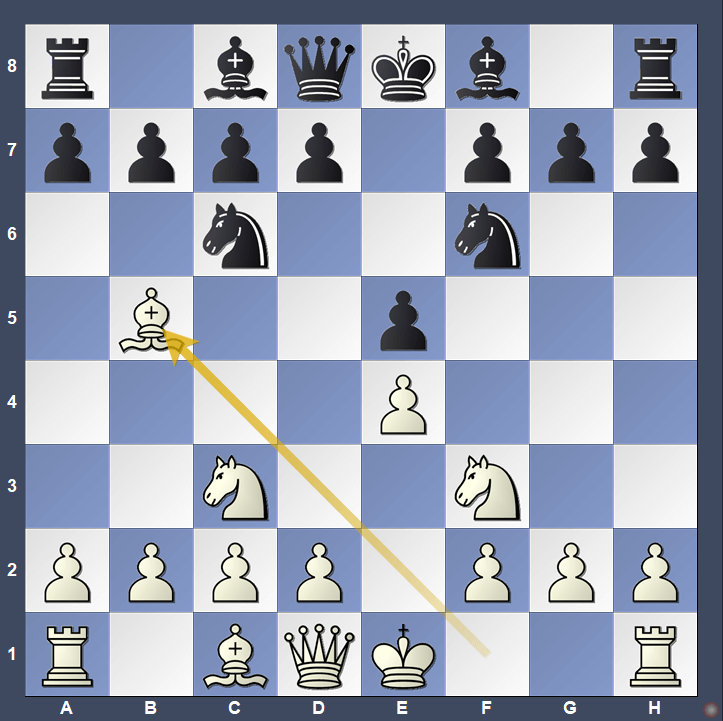 Now Black has a choice. The old move 4…d6 transposes to the Steinitz Defense of the Ruy Lopez and leads to slightly passive positions for Black after 5.d4. 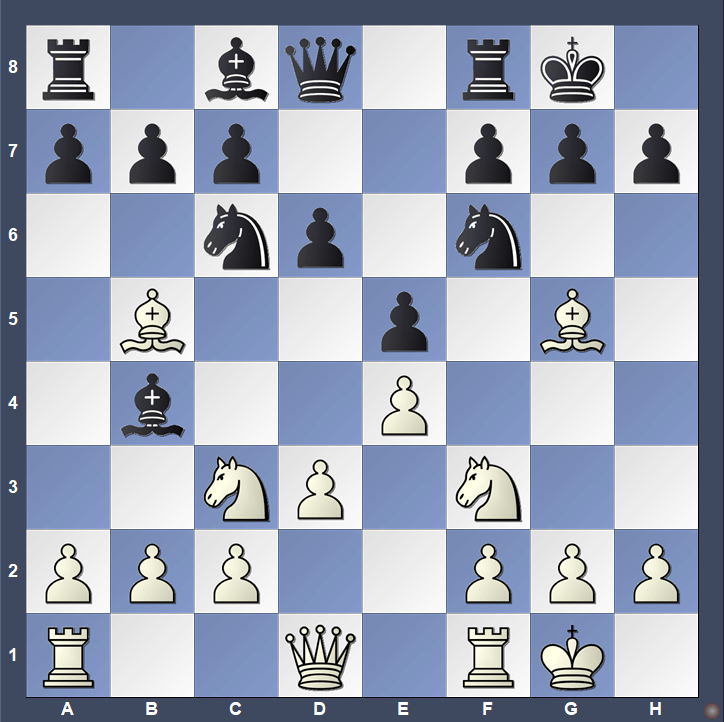 White is threatening to damage Black’s kingside pawn structure after Nd5, so Black’s most popular defense is to trade that knight off with 7…Bxc3 8.bxc3. Now White has a pair of bishops’ advantage, but the position is rather closed. Black’s main move is 8…Qe7, which starts the Metger Defense. 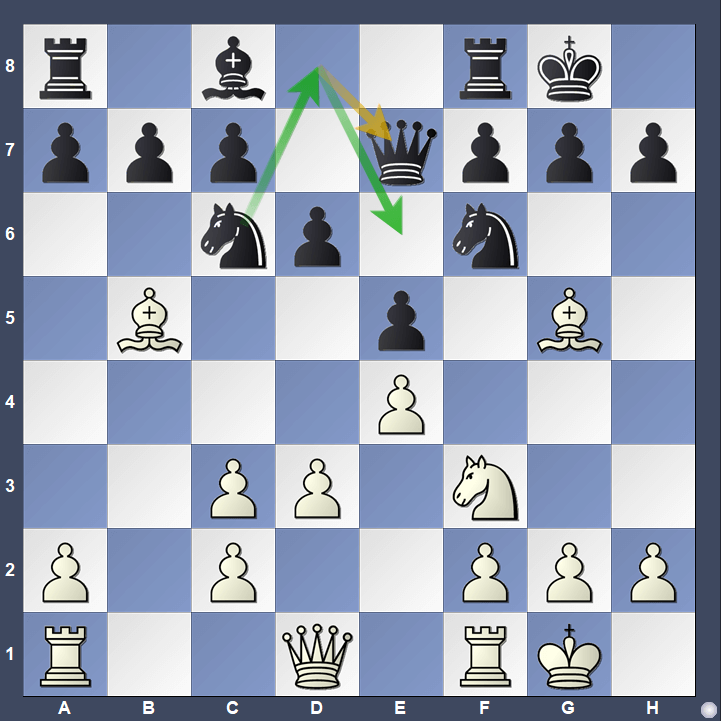 Johannes Metger played this against Curt von Bardeleben back in 1883. The idea is to reroute the knight from c6 to e6 via d8. This helps to deal with the pin and allows Black’s c-pawn to participate in the fight for the center. This move was used by Jose Raul Capablanca, Akiba Rubinstein, Anatoly Karpov, Viswanathan Anand, Hikaru Nakamura, and many others.

The arising positions are strategically complex, and both sides have chances. Below you can see an example.

Another popular way for Black is the Rubinstein Defense: 4…Nd4. 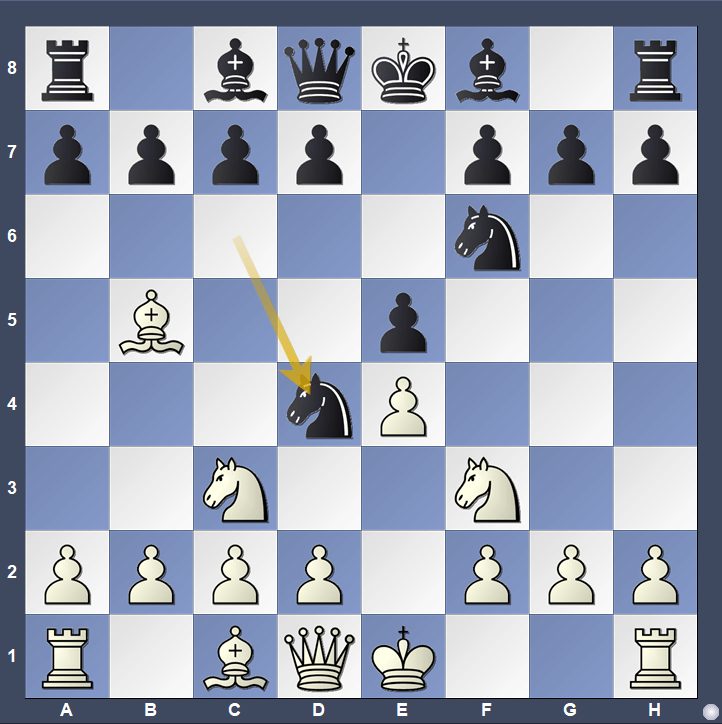 This is considered to be one of the best approaches for Black. Many people avoid playing it because White can now force a lot of trades. After 5.Nxd4 exd4 6.e5 dxc3 7.exf6 Qxf6 8.dxc3, the arising position is rather drawish. This makes 4…Nd4 not suitable for playing for a win as Black.

If White is more ambitious, they can play 5.Ba4, 5.Bc4, or 5.0-0. If the latter two lead to a calmer play, the most popular is 5.Ba4 can lead to chaos after Black continues in a gambit style with 5…Bc5 6.Nxe5. Below you can see an example of that. 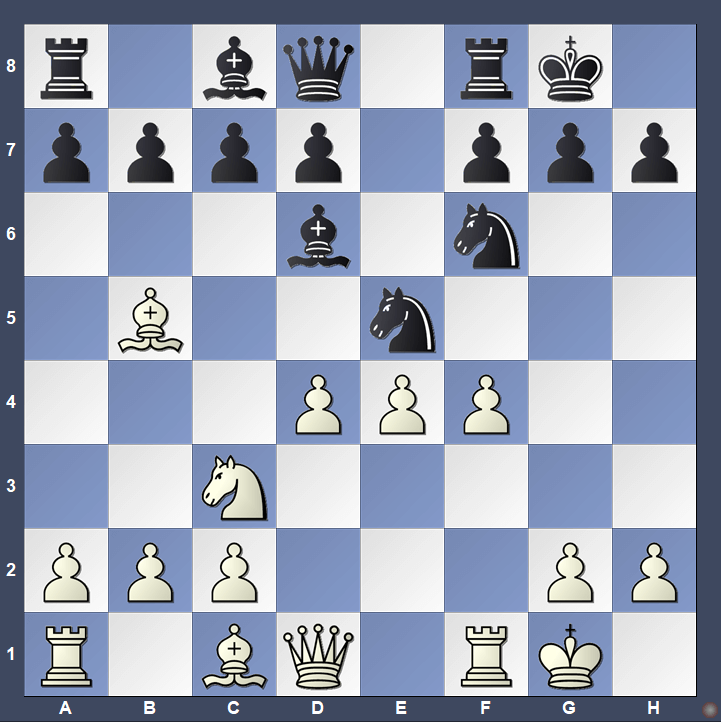 At the moment, the position looks a little bit crazy, but White will soon regain the piece, and things will be back to normal. Overall, White scores better here. The game can continue 9…Neg4 10.e5 Bb4 11.exf6 Nxf6 12.Qf3, with approximately equal position.

Another approach for White is 4.d4 exd4 5.Nxd4, which usually leads to more open and simple positions. 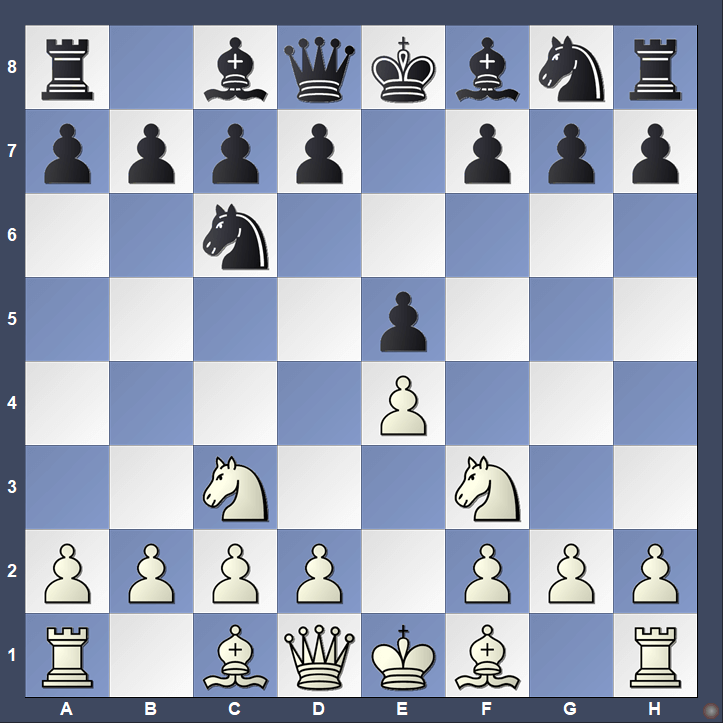 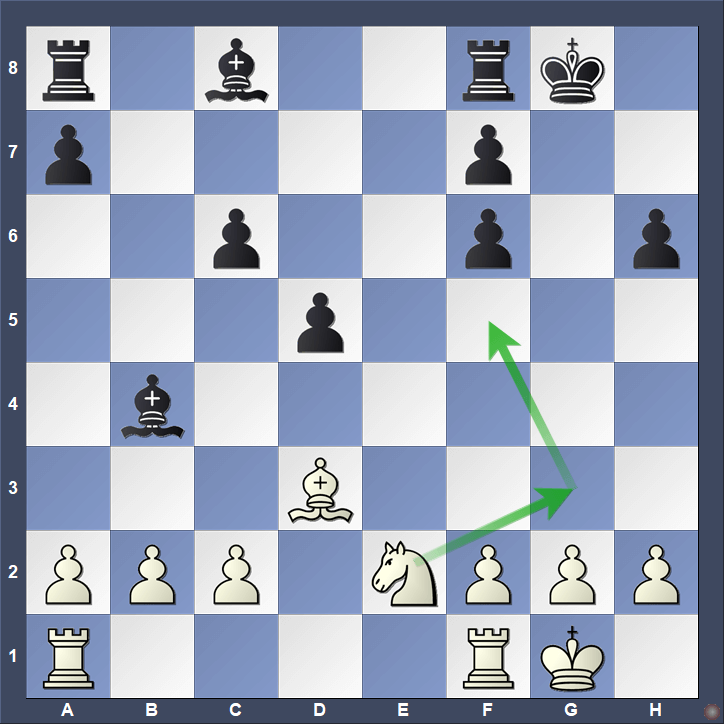 With precise play from both sides, the game should end in a draw. But in a practical game, White has a tiny advantage and almost zero risk. The line suits players with a good endgame technique.

Both sides had minor alternatives along the way (for example, 9…Bg4 or 9.Bd2), but it doesn’t change the general evaluation of this line.

Less popular but still attractive is 4.g3. It was favored by Igor Glek, who used to be top-20 in the world and played up to 150 official games with this line. 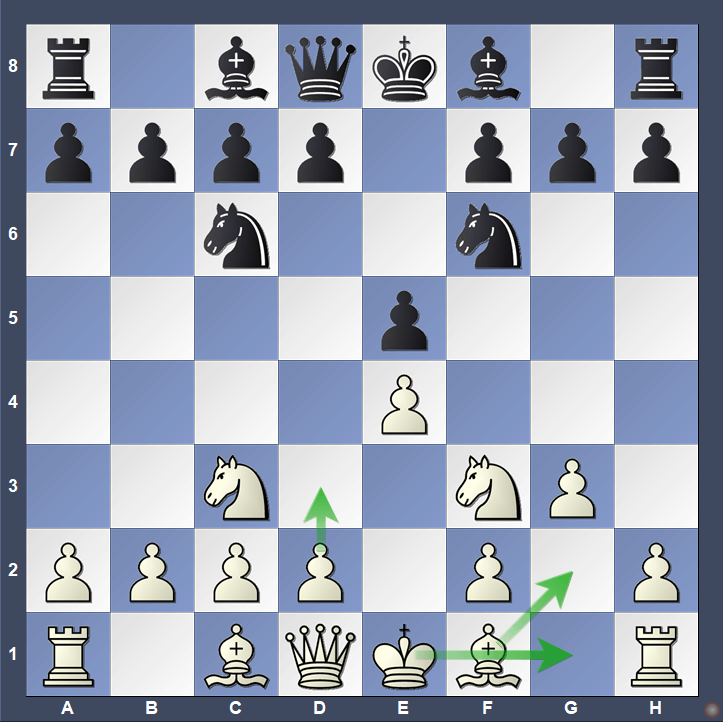 White plans to fianchetto the light-squared bishop, castle kingside, and later play for the f2-f4 pawn break. The character of the arising positions often resembles the King’s Indian Defense. According to the engine, Black gets a good position after 4…Bc5, 4…d5, or 4…Bb4, but White shouldn’t worry about that. This line is more about trying to get an interesting playable position with a clear plan for White.

Searching for new interesting ideas, White has tried a lot of different options on move 5. For example, Alexander Grischuk had some success with 5.Be2. 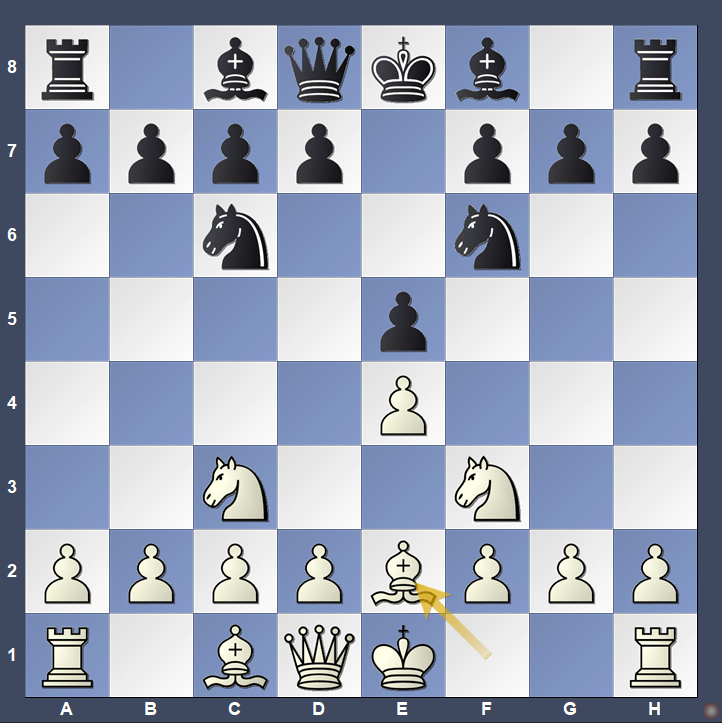 The move looks innocuous, but 5…Bb4 will be met by 6.Nd5, whereas 5…Bc5 runs into 6.Nxe5! The best is probably to play 5…d5, which leads to positions similar to the Scotch Four Knights but with colors reversed.

Another interesting approach is to play moves like 5.a3 or 5.h3. Such waiting moves can prove to be useful later in the game, but the main idea is to avoid theory and get a fresh middlegame position.

There is also the bizarre Halloween Gambit that starts with 5.Nxe5. White kicks Black’s knights away after 5…Nxe5 6.d4 Ng6 7.e5 Ng8 8.Bc4. It can work against inexperienced players thanks to the shocking effect, but objectively White’s position is already lost.

One of the best things about the Four Knights Game is that Black’s deviations from it are very risky. 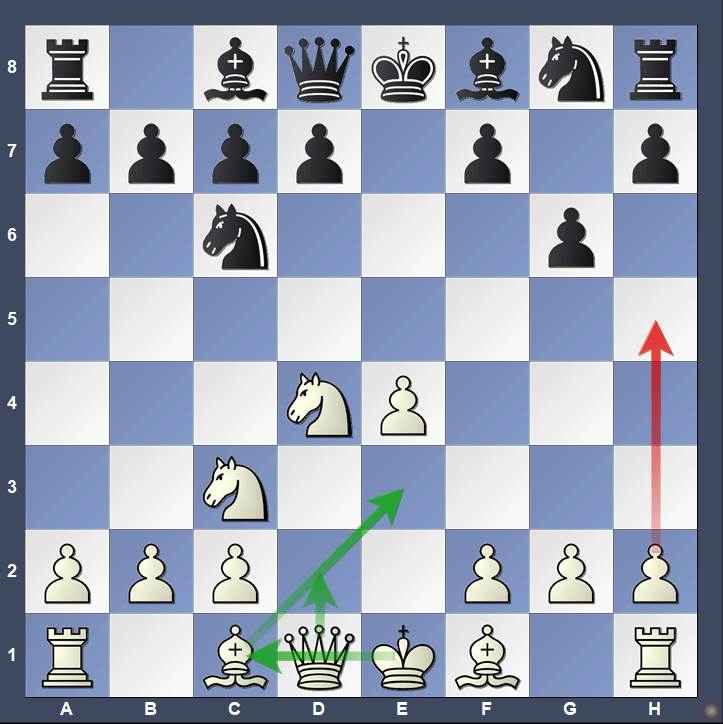 White’s best plan is to prepare queenside castling with Be3 and Qd2. The position resembles the Sicilian Dragon. Later the dark-squared bishops can be traded on h6 or d4; the h-pawn will march to h5 to open the file for the rook. 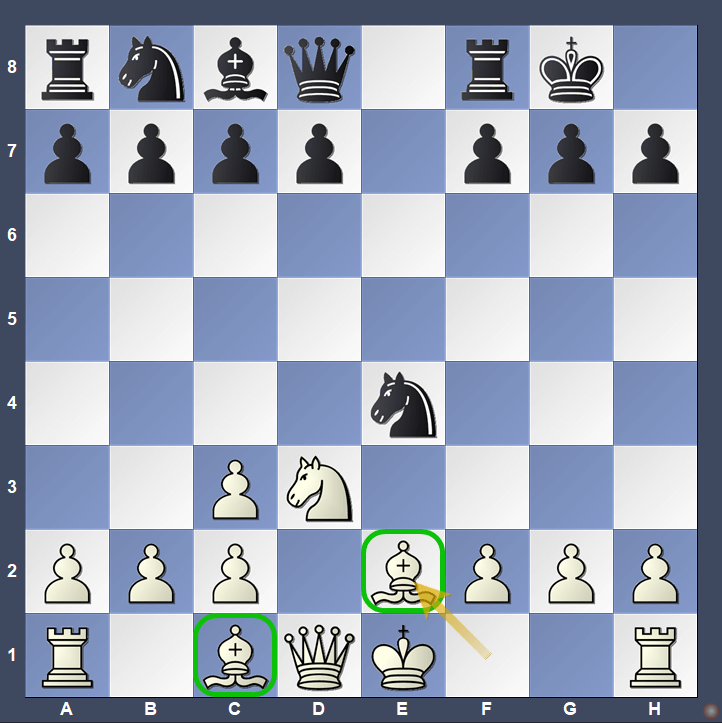 White has a small advantage thanks to the bishop pair, but Black’s position is solid and reliable. You can see a good example of White’s play in the viewer below.

The Four Knights Game is a solid and easy-to-play opening for White. It doesn’t require deep knowledge of theory and limits Black’s chances of playing for a win. Another perk of the Four Knights Game is that it can be used as the Anti-Petroff opening. On move 5, White has a broad choice of options. It is good to have at least a couple of them in your repertoire to be less predictable.