5/28/2021 – Potentially Magnus Carlsen and Ian Nepomniachtchi will meet in the final of the FTX Crypto Cup as both contenders to the World Championship advanced to the semifinals after beating their rivals in blitz tiebreakers. Carlsen will face Teimour Radjabov in the semis, while Nepomniachtchi will play an undefeated Wesley So. | Photo: Lennart Ootes

Shortly after we found out Ian Nepomniachtchi will be Magnus Carlsen’s next challenger to the World Championship, the two contenders to the highest title in chess might face each other in a direct rapidplay match. None of them had it easy in the quarterfinals of the FTX Crypto Cup though, as they only made it through in blitz tiebreakers after exchanging blows with their rivals in the two-set rapid matches. Since they are on opposite sides of the bracket, in case both win or both lose they will meet either in the final or in the match for third place.

Carlsen and Nepo will face two solid players who come from prevailing in the quarterfinals by showcasing their ability to coldly calculate when to play it safe and when to go for the kill. Teimour Radjabov drew seven times in his match against Anish Giri, which meant his victory in game 4 of the first set got him a ticket to the semis, while Wesley So has yet to lose a game in the event — he needed only seven games to knock out Maxime Vachier-Lagrave, which means his undefeated streak has extended to 22 games since the prelims.

After a fair share of good luck helped him knock out Fabiano Caruana, Nepomniachtchi jokingly commented once he found out he will play So in the final:

Should we believe him? He will certainly be tempted to end his opponent’s unbeaten streak! 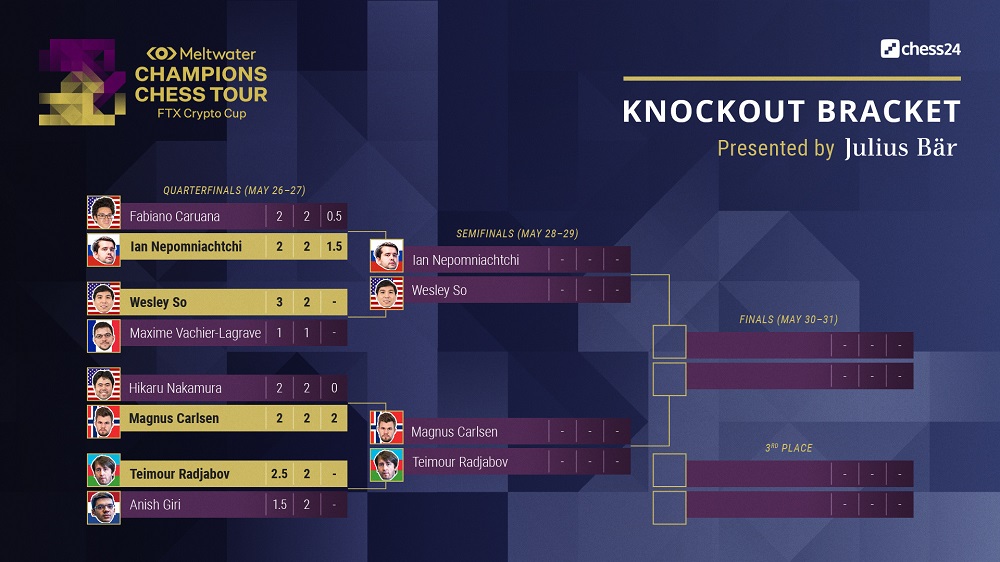 After four decisive games, all favouring the white player, on day 1, Carlsen and Nakamura kicked off the day trading blows with the black pieces. Game 2 was a sharp struggle, with Naka failing to find the most trying continuation in a critical middlegame position.

The American’s 25.b5 was not a grave tactical mistake by any means, but it gave his opponent a chance to regroup along the dark squares on the queenside. Instead, keeping the tension with 25.a6 would have forced Carlsen to find a deeper plan to untangle in a complex position.

Soon after, Black had already grabbed the initiative, and the world champion did not hesitate to simplify into a superior endgame.

In this opening Black opts for active piece play and is not afraid to fight for the initiative from an early stage. One of the many good features of this opening is that Black is often the side which controls the pace of the game.

36…Qf1+ 37.Qxf1 gxf1Q+ 38.Kxf1 and Black started to push his pawn mass in the centre. Good technique by Carlsen gave him a 49-move win to level the overall score.

Games 3 and 4 finished drawn, which meant the match would be decided in tiebreaks. In the blitz phase, Nakamura faltered early on, and Carlsen was ruthless in making the most of his opponent’s mistakes. The world champion won with both colours and moved on to the semis.

Caruana came from showing great chess to win the preliminaries, and in fact losing his match to Nepomniachtchi had all to do with his inability to convert strong positions into victories, especially in the second set of the match. Nepo later confessed:

I think I was losing in every game today.

Remarkably, after a tough struggle in game 2, Caruana went for a perpetual check in what had become a completely winning queen endgame once his opponent blundered on move 59.

All four rapid games in the second set finished drawn, with Caruana also failing to score from a clearly better position in game 3. Naturally, in the blitz tiebreakers, it was Nepo who prevailed, as his opponent was probably demoralized after realizing what he had missed.

A fully pragmatic approach is serving Radjabov well in this format. The Azerbaijani won the first set against Giri and signed two 15-move draws with the white pieces on Thursday. Giri fully relied on his games with white. In both cases, the contenders reached rook endgames, with the Dutch star failing to calculate precisely in what actually was a winning position.

Endgames of the World Champions from Fischer to Carlsen

Let endgame expert Dr Karsten Müller show and explain the finesses of the world champions. Although they had different styles each and every one of them played the endgame exceptionally well, so take the opportunity to enjoy and learn from some of the best endgames in the history of chess.

As Karsten Müller notes in his annotations (see below), “exchanging into a pawn endgame requires great care”. Here, Giri needed to keep the rooks on the board by playing 46.Rc8, since Black’s pieces are too passive and will not be able to defend all the pawn weaknesses in the long run. Instead, White entered the pawn ending with 46.Rxe6+, only to find out all too late that his opponent was just in time to force a draw.

In game 4, it was Radjabov who got a slight edge in another ending, but a draw was enough for him to reach the semifinals. GM Müller also took a more in-depth look into that endgame — go through his instructive annotations in the replayer below!

This one the only one-sided match in the quarterfinals, with So scoring wins in games 3 and 4 of the first set and securing a ticket to the semifinals after beating his rival once in Thursday’s second mini-match.

I don’t think he was able to play his best in our match today. I think compared to the match we played three months ago he was not able to put much pressure with the white pieces. […] I learned from my mistake, which is not to play 1.e4 against Maxime.

Will So manage to keep his excellent run against the ever-dangerous Nepomniachtchi?