5/29/2021 – Going into the only rest day at the Women’s Grand Prix event in Gibraltar, Zhansaya Abdumalik and Mariya Muzychuk (pictured) are sharing the lead on 4½/6 points. The co-leaders drew their direct encounter in round 6, much like Kateryna Lagno, who is the only player trailing by a half point. As per the current standings, the Russian is the favourite to get a spot in the Candidates via the Grand Prix. | Photo: FIDE

The tournament kicked off with the participants going all out after most of them spent a whole year or more away from the (physical) boards. Rust has certainly been a factor, while endurance will play an increasingly bigger role as we head into the second half of the event. With five rounds to go, we expect nerves and long-term strategy to also play a role, as three players still have chances to make it into the Candidates via the Grand Prix series.

After six rounds, Zhansaya Abdumalik and Mariya Muzychuk are sharing the lead on +3, while Kateryna Lagno stands a half point behind. Curiously, Lagno is set to face the current co-leaders in the final two rounds — she will have black against Abdumalik in round 10 before facing the younger of the Muzychuk sisters with white in the last round.

The Accelerated Dragon – a sharp weapon against 1.e4

For Lagno, winning the tournament is not the main goal, as she will be keeping an eye on Nana Dzagnidze and Anna Muzychuk, the other two participants with chances to get a spot in the Candidates. A complete run-down of how the fight for the qualification might play out in the second half, written by press officer John Saunders, is presented at the end of this article. 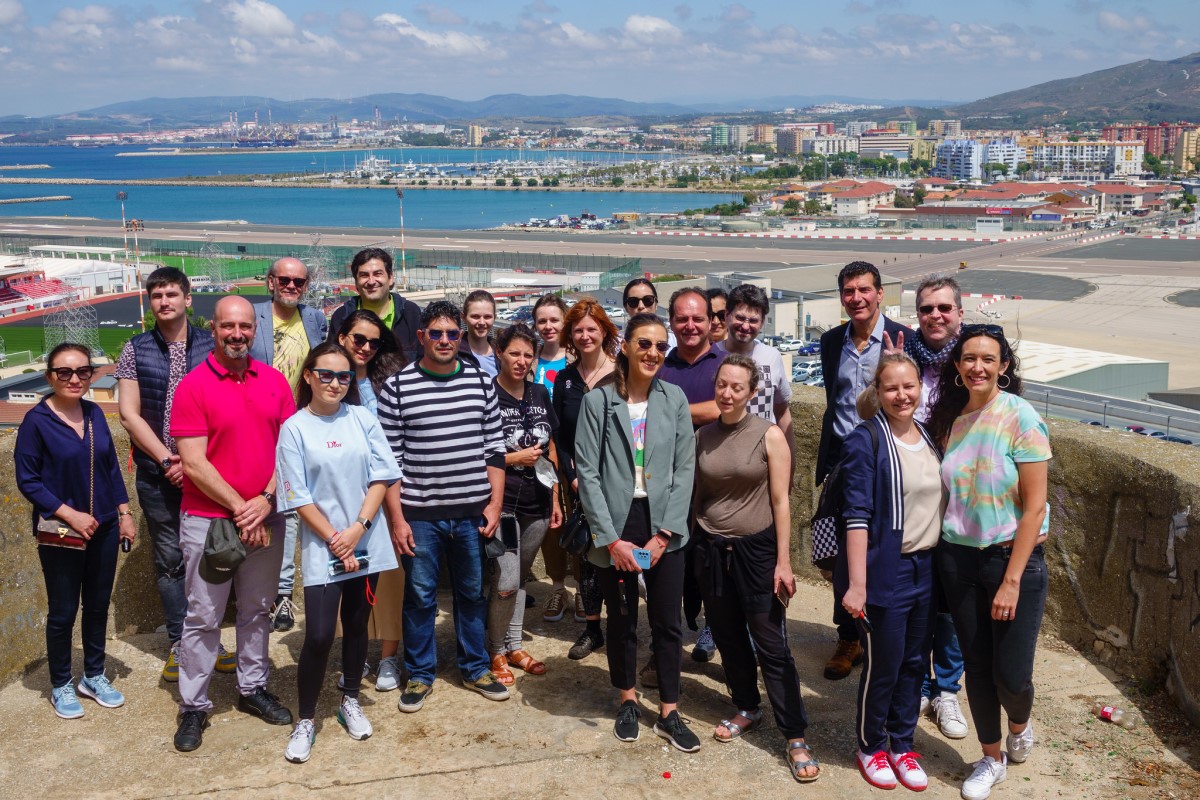 In round 5, co-leader Abdumalik punished a mistake made by Antoaneta Stefanova as early as move 10.

While the young Khazakhstani was still blitzing out her moves, Stefanova was clearly out of book by this point, as she pondered for almost half an hour before erring with 10…Bd6, when 10…Bxc3+ or 10…Qh5+ 11.g3 Bxc3+ were needed to keep the dynamic balance in the position.

The advantage in development is all that matters at this point. Now came 16…Bxe5 17.Ne4 Qxf5 (the queen has nowhere to go) 18.Nd6+

If you want some inspiration for your next online or offline blitz games this video course is for you. Simon Williams shows his favorite opening traps in 60 minutes.

White grabbed the queen and ended up getting a 28-move win.

Antoaneta Stefanova pondering how to continue on move 8 | Photo: FIDE

The most interesting game from round 6 was Elisabeth Paehtz v Valentina Gunina. Playing white, Paehtz had the upper hand in the middlegame, but the German hurried to simplify the position, which allowed her opponent to give up an exchange to activate her pieces.

Gunina, who came from winning two games and losing three, did not hesitate to give up her rook for the bishop and went on to score a hard-fought 66-move victory. 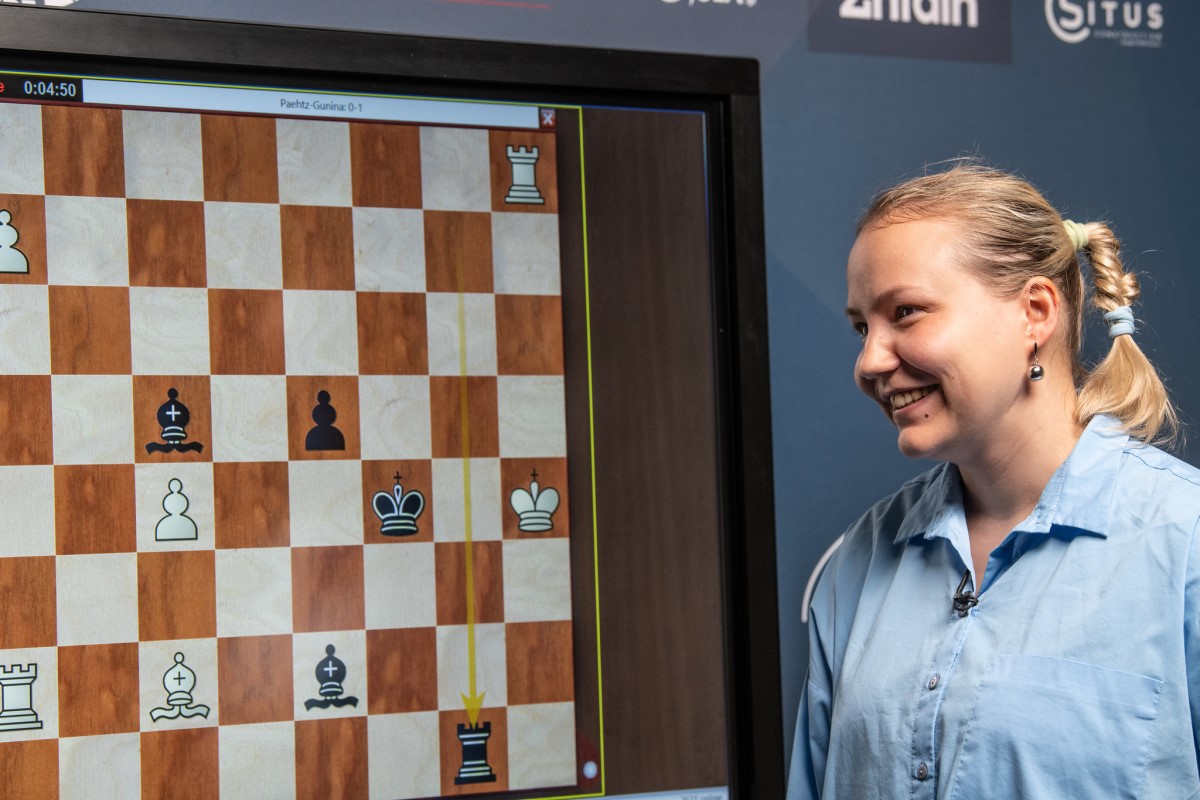 Before the Gibraltar tournament, Humpy Koneru, who is not playing here, was in second place with 293 points. Three Gibraltar contestants, Nana Dzagnidze (180), Kateryna Lagno (180) and Anna Muzychuk (165) can still pass her score with a first or second place, but that would only push the Indian grandmaster down to third place, which still qualifies. Thus it would need two of the above names to finish first and second, or share first place, to deprive Humpy Koneru of a spot in the Candidates.

Another Gibraltar non-participant, Alexandra Kosteniuk, currently has 193 Grand Prix points to be in third place. But, to qualify, she would need all three Gibraltar participants cited above to score fewer than 13 points. Sadly for Alexandra, this is not mathematically possible as the player who finishes last in Gibraltar scores 10 Grand Prix points but, fatal to Alexandra’s aspirations, the 11th placed finisher scores 20 points. Even if two of the above players were to tie for last, they would still score 15 points each and overtake Alexandra. This means that at least one player currently in the Gibraltar line-up must overtake Alexandra and qualify for the Candidates from Gibraltar.

As well as Nana, Kateryna and Anna, a fourth player in the line-up has a theoretical chance of qualifying for the Candidates. This is Alina Kashlinskaya of Russia. However, with her current score, her chance is very slim unless she can mount a finish to rival her storming tournament performance in the Isle of Man in 2018.

Note that substitute players cannot qualify for the Candidates. This is why Zhansaya Abdumalik, currently doing well in Gibraltar and with 110 Grand Prix points from an earlier event, is not in the running for a place in the Candidates. 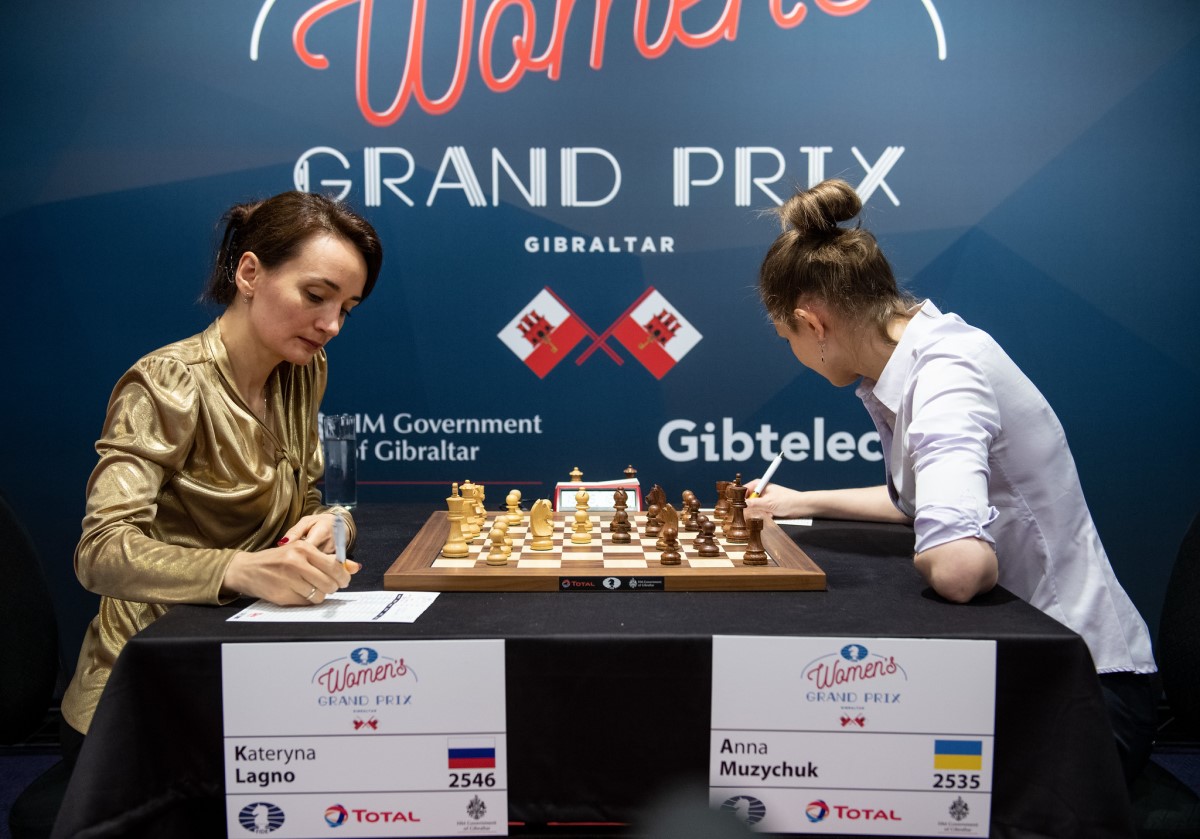