The New in Chess Classic is now in full swing and it has brought even more top-level chess to a table already graced by the FIDE Candidates Tournament.

World Champion Magnus Carlsen is in action once more and he is joined by a glittering array of strong, talented Grandmasters including Hikaru Nakamura, Leinier Dominguez Perez and Levon Aronian. There is also room this time for significant fresh blood, including England’s Gawain Jones. The games can be followed live on chess24.

To tie in with the New in Chess Classic and our new sale of New in Chess courses, we present a new series featuring great moments from chess history.

New in Chess Magazine was first published in 1984. I vividly recall reading the first issue, on the way to a Weekend Chess Congress. Anatoly Karpov was still the World Champion at the time. A lot has happened since then and we many great moments in chess history from which to choose.

We begin today with the important – but not entirely unexpected – moment of Magnus Carlsen becoming the World Champion of chess.

This was back in 2013. Does it feel recent, or distant? Time is playing tricks with us all. Carlsen has already been champion for longer than most of the others in the traditional line. By the time his next title match comes around – in November, this year – his tenure will already be eight years. Only Emanuel Lasker (27 years), Alexander Alekhine (17), Mikhail Botvinnik (13), Anatoly Karpov (10), Garry Kasparov (15) were champions for longer.

Given Carlsen’s dominance, it is easy to forget just how difficult it was for him to win the London Candidates Tournament in March, 2013. He started the event as the clear favourite, but two defeats in the second half of the tournament – to Vassily Ivanchuk and Peter Svidler – left him squeezing through on tie-break, at the expense former World Champion Vladimir Kramnik. Indeed, Kramnik suffered just one defeat and that was against the mercurial Ivanchuk, in the very last round. It was a close call, but Carlsen was on his way to a title match agains the defending champion, Viswanathan Anand.

The big match took place in Chennai, India, in November 2013. Carlsen had the higher rating; Anand had the greater experience.

The first four games ended as draws. The first two were tame, but games three and four had a lot more content and went on for 51 and 64 moves respectively. Then came a brace of victories for Carlsen, which effectively seized the match victory. There were three more draws from the next four games and one more win for Carlsen, which came in the ninth game, after Anand made one last valiant effort to turn the course of the match. 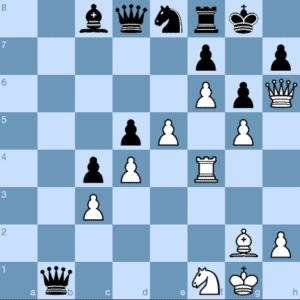 Anand is a queen down but his kingside attack looks very strong, with 29.Rh4 followed by 30.Qxh7 checkmate clearly on Anand’s agenda.

However, one of the luxuries of having a large material advantage is that some of it can always be given back when appropriate. Carlsen played 28…Qe1! 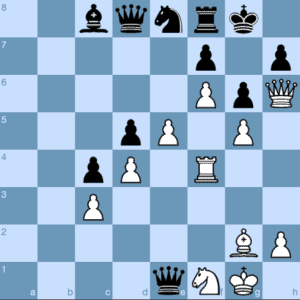 Now 29.Rh4 fails to 29…Qxh4, leaving White a whole rook down with no further hope of a checkmating attack. Therefore, Anand resigned, 0-1.

The tenth game brought 1.e4 from Carlsen and the combative Sicilian Defense (1…c5) from Anand. The champion had to win three games in a row just to equalise the match in the standard games. A tall order, by anyone’s standards.

It was a game with plenty of action. On the 65th move, Carlsen advanced his last pawn to c5 and Anand snapped it off with his knight. The final position of both the game and the match brings us to our first great moment from chess history. 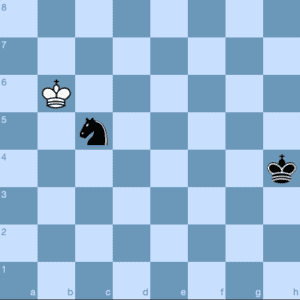 The position is a draw, of course – which is all Carlsen needed to claim the crown.

The table of results showcases Carlsen’s smooth and impressive performance. The final two games were not required, due to Carlsen’s unassailable lead.

It is rare for a champion to lose his crown without winning a single game.  It happened only twice before this occasion: 1921, when Emanuel Lasker lost to Jose Raul Capablanca and 2000, when Garry Kasparov saw his extraordinary reign end with a whimper, when he failed to make an impression on Vladimir Kramnik’s famous Berlin Wall.

The new World Champion’s Tweet is one of the most famous of all. 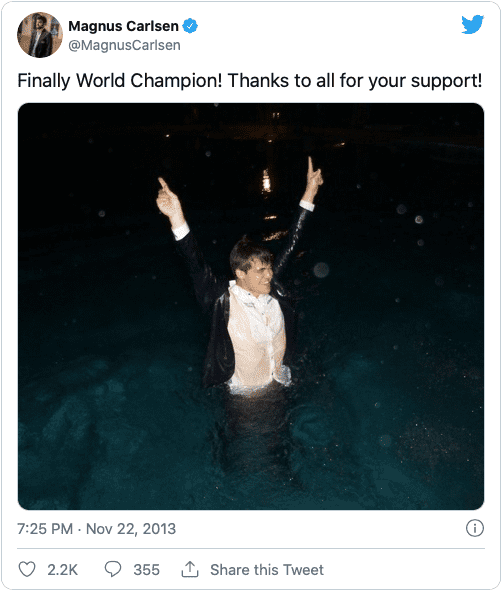 There was a rematch one year later, in which Carlsen defeated Anand for a second time. The match was slightly closer than the first; Anand won one game but Carlsen kept his title with a 6.5-4.5 victory.

Carlsen’s two subsequent title defences were extremely close. Against Sergei Karjakin (2016) and Fabiano Caruana (2018) the scores were level at 6-6 after the 12 main games, but on both occasions the champion kept his crown by winning the Rapidplay tie-breaker mini-matches.

If all goes to plan, the next title match will take place in Dubai, from 24 November to 16 December 2021. The match was originally scheduled to place towards the end of 2020. The reason for the delay is the year-long hiatus imposed on the 2020 FIDE Candidates Tournament. There are just two rounds left to play and at the moment Carlen’s new opponent looks like it is going to be either Ian Nepomniachtchi or Anish Giri.

Our New in Chess Classic sale includes Endgame Virtuoso Magnus Carlsen by IM Tibor Karolyi and Tactics Training – Magnus Carlsen for readers wanting to discover more magic moments from Magnus Carlsen. There are plenty more titles on sale too and we will present more great moments in chess history later this week.