Puzzle time! John Nunn’s Chess Puzzle Book was first published by Gambit Publications in 1999 and then as an expanded version a decade later. This week saw the release of a brand-new Chessable version, complete with the MoveTrainer™ facility.

The first puzzle is how can it be that 1999 is already so long ago? The second question we must ask ourselves is: ‘Can an old puzzle book still have relevance in 2021?’ I remember enjoying reading it all those years ago, but people say nostalgia isn’t what it used to be.

How Does John Nunn’s Chess Puzzle Book Differ From Other Puzzle Books?

It is time to reacquaint ourselves with the author’s introduction, to see what John Nunn’s Chess Puzzle Book offers, which other puzzle books may not.

‘Chess puzzle books are a well-established genre. This has certain advantages; the reader is on familiar territory and knows more or less what to expect, so the author should not have to embark on a detailed explanation as to the purpose of the book, the layout, and so on. Yet, curiously, I find myself doing almost exactly that. While researching this book, I examined many other puzzle books; some were already familiar to me as I had used them myself for training purposes, while others were new to me.’

Which of the many possible approaches did John Nunn take with this book?

‘I decided to combine the aims of entertainment, self-assessment and instruction, but with the emphasis on the last of these. It is quite easy to go through a puzzle book and end up wondering if you have learnt anything, but I hope that will not be the case with this book. Wherever possible, I have pointed out useful general principles embodied in the puzzles – it is surprising how certain types of mistake occur time and time again. Moreover, the puzzles have quite detailed solutions; if you have seriously tried to solve them yourself, then comparing your analysis with the solution cannot help but reveal what you are missing (if anything!).’

Alongside the type of puzzles one would expect to see, the book has two chapters featuring an unusual slant.

Some of us already specialize in such a procedure, but for the better players out there this chapter requires the author’s explanation.

‘While looking for suitable puzzle positions for this book, I was struck by how many games finish abruptly as a result of early blunders. Not that these lapses were perpetrated by weak players – far from it, they were often by respected grandmasters. I decided to collect these positions together for a thematic chapter which would serve as a warning to keep your tactical guard up at all times.’

Actions speak louder than words. Take a look at the following position. Everything seems safe at first glance. Change your normal way of thinking and see if you can find the wrong move for Black. The answers can be found at the end of this post. 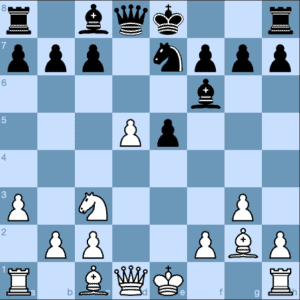 Black (2515) now played a move which allowed a reply inducing instant resignation. What was it?

The Test of Time

The second extraordinary chapter starts with a simple premise: ‘How do the great masters of the past compare with the leading players of today?’

Nunn examines games from one historical tournament – Karlsbad 1911 – and compares his findings with those from the Biel Interzonal of 1993 (which ticked the ‘recent’ box when the book was first published). His conclusion may still ruffle a few feathers.

‘I had no particular preconceptions about what the results of this search would be. Like most contemporary grandmasters, I was familiar with all the standard textbook examples from the early part of the 20th century, but I had never before undertaken a systematic examination of a large number of old games. I was quite surprised by the results. To summarize, the old players were much worse than I expected. The blunders thrown up by Fritz were so awful that I looked at a considerable number of complete games ‘by hand’, wondering if the Fritz results really reflected the general standard of play.’ 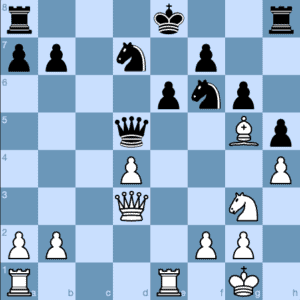 Nunn is clearly unimpressed by Spielmann’s play. What should he have played, to put Alekhine firmly on the ropes? The answer is at the end of this post.

Nunn goes on  to say: ‘I had originally intended to have the Karlsbad and Biel positions side-by-side in this chapter, but the results were so lopsided…’  It would be very interesting to see Nunn comparing the quality of the games from a much more recent tournament with those from Biel, 1993. Will the gap in quality be considerable, or will the chess games of the 1990s stand more chance of being able to pass the test of time? Would the results from different eras still be lopsided? There is clearly plenty of scope there for another book.

One thing is certain: John Nunn’s Chess Puzzle Book has certainly stood the test of time and the material does indeed remain relevant to today’s audience. 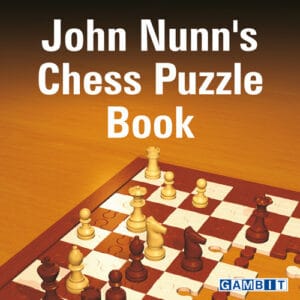 If you are ready to put your chess powers to the test then now is the time to head for John Nunn’s Chess Puzzle Book.

‘This appears to be a natural developing move, but… Black should have played 11…O-O although he then has to concede the two bishops after 12.Ne4.’

‘White follows up with 13.g5 winning a piece. It is hard to explain how such a noted tactician as Velimirovic could have overlooked this simple idea. Perhaps there was a psychological element involved, he never considered that the normally placid Andersson would ever push his g-pawn forward more than one square.’

‘The killing move is also the most obvious. The analysis proving a win for White is a little more complex, but it would quite reasonable to play the correct move entirely on general principles.’

‘The diagram position screams out for a quick kill and White’s advantage is so enormous that he doesn’t even have to be subtle about it. The textmove is an obvious and deadly move. The black king is trapped in the centre (…0-0-0 leaves the a7-pawn hanging) and his knight on f6 is pinned against the mate on e7. There is in fact no real defence to the lethal threat of Ne4, hitting the pinned knight and taking aim at the juicy d6-square.’