Those who studied Grandmaster S.P. Sethuraman’s 1.e4 LTR part 1, will be thrilled to learn that part 2 continues the same path. If you didn’t, these lines from the course’s introduction will give you an idea of the spirit of this repertoire:

“I am back with my deadliest novelties and roaring analysis with breezy and entertaining comments. (…) The lines I’ve chosen contain a lot of atom bombs, waiting to burst.”

A statement the course lives up to!

GM Sethuraman is well known for his enterprising chess style as well as his deep opening knowledge, which has been praised by Vishy Anand himself.

This week’s release in our flagship series presents a complete repertoire against the Sicilian, the Caro Kann, and the French defenses. Combined with its predecessor, this prepares you for 90% of your games with White.

Following the popular 1.b3 cowboys, Sethuraman proposes calling the wolf pack to the community around this course. Let’s see them hunting.

1.e4 vs the Sicilian

No Rossolimo! Sethuraman’s approach is to go for the neck as he consistently chooses aggressive continuations and simple-development space advantages in the Open Sicilian. 6.Bg5 against the Najdorf and the Yugoslav Attack against the Dragon belong to the former case. 7.Nd5 in the Sveshnikov to the latter.

While building this course he paid close attention to the work of some fellow Chessable authors to improve over their analysis.

Remarkable are the fresh ideas 6.Bf4 in the Taimanov and 7.Qd3 in the Rauzer Attack. 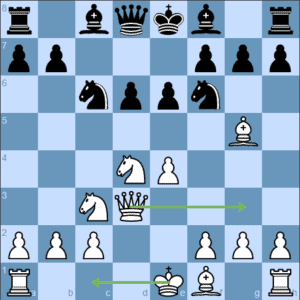 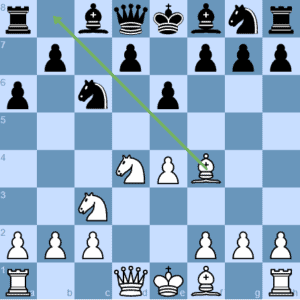 They serve as an illustration that in any opening, many paths are still to be found for both sides.

Rarer lines such as the Nimzowitsch Sicilian, the O’Kelly, and others are also scolded.

The Advance Variation has been White’s main weapon to put pressure on the Caro Kann for a while now.

Against the Arkell/Burmakin variation (the fashionable 3…c5) 4.Nf3 is the wolf pack’s way. Instead, Wesley So’s 4.dxc5 is actually the main move. Sethu’s idea is to prioritize development and avoid heavy theory while keeping the chance of transposing to certain advantageous 4.dxc5 positions if convenient.

In the mainline with 3…Bf5 the recommended path is the Tal variation with 4.h4. White grabs space and makes the f5 bishop feel a bit uncomfortable.

Black can easily go down in flames in these crazy lines so a bit of memorization will be rewarded.

Other minor lines such as 2…g6 and 3…Qb6 are also analyzed but they mean no trouble for White.

Sethu relies on the good old 3.Nc3, accepting whatever variation Black chooses to play. Again White’s repertoire is as principled as possible (7.Qg4 against the Winawer, the Steinitz against 3…Nf6, and Classical development against the Rubinstein).

Here’s a juicy position from the Rustemov Variation to get a feel for these lines. 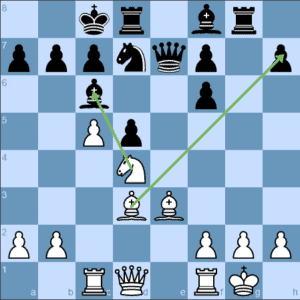 Lifetime Repertoires: Sethuraman’s 1.e4 part 2 is now available and you can get it at a whopping 54% off before July 26, 12 pm CET. You can also get a free preview with this Short & Sweet course and refresh some knowledge from part 1 too. 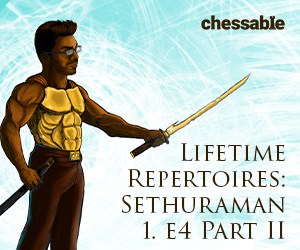