3/10/2021 – Miguel Najdorf (April 15, 1910 – July, 4 1997) is one of the great chess players who never became World Champion. Born in Poland, Najdorf stayed in South America after the Chess Olympiad 1939 in Buenos Aires and became an Argentinean and a successful businessman. Vlastimil Hort had the pleasure of meeting “Don Miguel” in person and shares memories of these meetings.

I was very pleased to recently read an article by Andre Schulz entitled “Remembering Miguel Najdorf”, which appeared about two years ago on ChessBase. Perhaps I can contribute something to complete the picture of Najdorf.

When did we meet for the first time? At the Chess Olympiad Leipzig 1960! I, still a nobody, was playing as reserve for the CSSR. 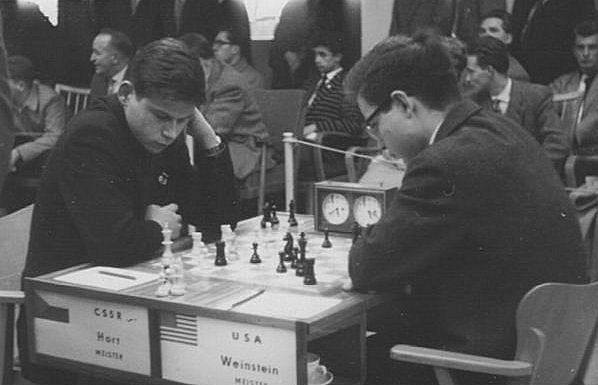 Chess Olympiad 1960, a young Vlastimil Hort plays against Raymond Weinstein from the US.

He was playing first board for Argentina. His second wife, Dona Maria, who was extremely attractive, accompanied him. Both were very elegant, dressed in the latest fashion. 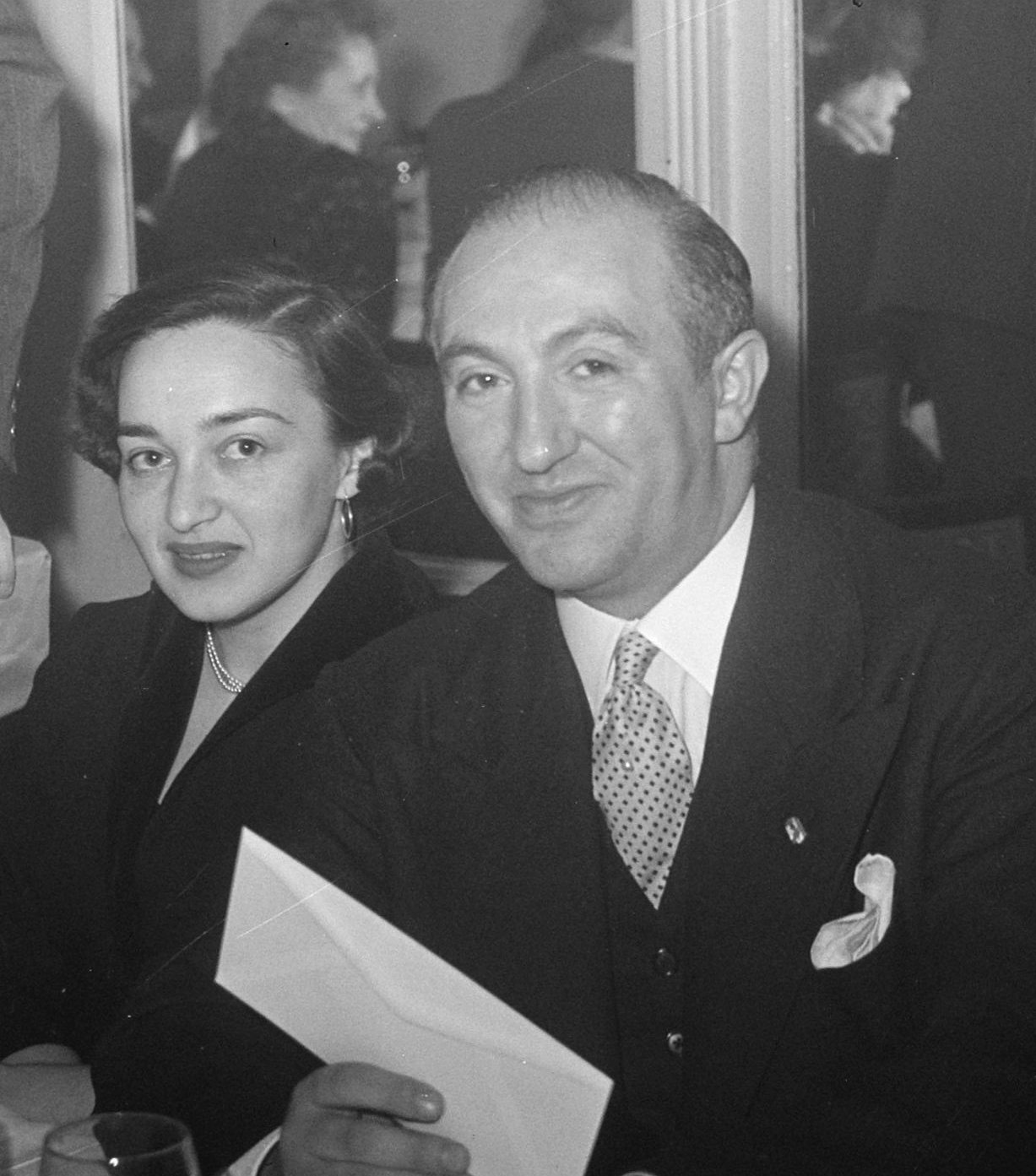 Najdorf with his wife

It remains an eternal mystery to me why Najdorf did not take part in the World Chess Championship Tournament 1948. Perhaps the Russians, which at that time were strongly represented in the FIDE were against him – were they afraid?

Karel Opocensky later told me in Prague that Najdorf had won the tournament there in 1946 very convincingly and confidently. “Opo” was allowed to accompany the apparently always good-humoured Najdorf on his subsequent simultaneous tour through Czechoslovakia. The spectators everywhere appreciated his playing strength and loved his performances.

In Palma de Mallorca I once had to witness an argument between Petrosian and Najdorf. Najdorf claimed that Petrosian had kicked him violently under the table during the game. The argument almost ended in a brawl. A special arbiter was then assigned to the game.

By this time, Don Miguel was already taking me seriously. Maybe because I spoke Spanish quite well, and we could communicate in his language, and I always kept my feet still under the table, our relationship developed quite well and became a bit more personal.

I was curious what he had to tell, and I was particularly interested in his blindfold simul in Argentina in 1947. Playing on 45 boards blindfold – a sensation at the time. Najdorf was proud that he had managed to sell all of his games to Clarin, an Argentine newspaper. But he didn’t like to talk about the fact that some of the opponents were total beginners. I quickly understood that he was not comfortable with this topic and switched to something else.

Bugojno 1980. Najdorf was a guest of honour. He was even allowed to have a close look at the games on the podium, and he walked back and forth between the boards. His favourite player was definitely Lubomir Ljubojevic. One day Ljubojevic was playing against Gligoric and the game was very exciting.

When “Lubo” got up and left the board, Najdorf – for whatever reason – sat down on his chair as if in a trance and immersed himself in the position. Suddenly Don Miguel forgot everything around him, made a move, pressed the clock and used Ljubojevic’s score sheet to write the move down. That was very funny and I had to laugh out loud when I saw that. Thank God, this “intervention” had no effect on the game. The arbiters settled the issue diplomatically.

During the tournament, Yugoslavia’s President Marshal Josip Broz Tito died. There was a week of national mourning and the organisers brought all the participants, including Najdorf, to the Hotel Argentina in Dubrovnik. The Chess Olympiad 1950, the first Olympiad after the war, was played in Dubrovnik, and Najdorf, who was playing for Argentina, had scored the best result on board one. 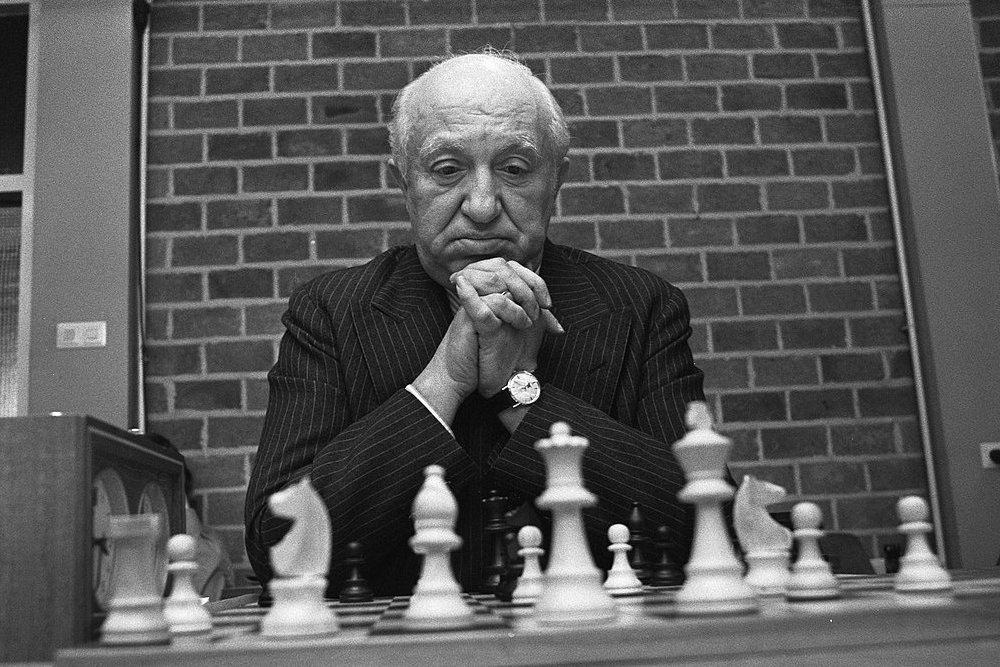 André Schulz mentioned in his article that “God Najdorf” was also a successful entrepreneur. One night, before the rest day of the match USSR against the Rest of the World 1970, I played blitz against Najdorf and Fischer in the hotel Metropol, and Najdorf revealed some tricks of his trade.

At any rate, Don Miguel could well afford a carefree “dolce vita”. “Young man,” he said to me, “don’t forget: chess is a bit of science, a bit of art, but certainly a lot of gambling.”
I have remembered that sentence very well. What was Don Miguel really, scientist, artist or gambler? The question remains!

Ljubo later told me details of Najdorf’s death on July 4, 1997 in Malaga. Najdorf spent the night before his death at the casino. He had massively bet on “Red”, and then the roulette ball fell on 1 – red. While cashing in the chips, Don Miguel suddenly grabbed his chest. Heart attack. He was immediately flown by helicopter to the hospital in Malaga. But the doctors could do nothing for him. He was 87 years old!

Vlasty, are you a gambler too? How about taking everything you own to the casino to bet on red? And then pray that Don Miguel is keeping his fingers crossed for you from the chess café upstairs!

Vlastimil Hort
Vlastimil Hort was born January 12, 1944, in Kladno, Czechoslovakia. In the 1970s he was one of the world’s best players and a World Championship candidate. In 1979 he moved to West Germany where he still lives. Hort is an excellent blindfold player, a prolific author and a popular chess commentator.
Discussion and Feedback Join the public discussion or submit your feedback to the editors
We use cookies and comparable technologies to provide certain functions, to improve the user experience and to offer interest-oriented content. Depending on their intended use, analysis cookies and marketing cookies may be used in addition to technically required cookies. Here you can make detailed settings or revoke your consent (if necessary partially) with effect for the future. Further information can be found in our data protection declaration.