5/2/2021 – In a hard-fought first set of the New in Chess Classic finals, Magnus Carlsen grabbed the lead by scoring a 3-1 win over Hikaru Nakamura. After drawing the first two games and losing the third encounter, Naka had a better position in a must-win situation. The American mishandled his advantage and Carlsen ended up scoring a second win in a row. Meanwhile, Shakhriyar Mamedyarov and Levon Aronian tied the first set in the match for third place. | Photo: Lennart Ootes

The era of elite online chess tournaments has seen a major rivalry develop between world champion Magnus Carlsen and blitz specialist Hikaru Nakamura. In the very first event organized by the Norwegian, the Magnus Carlsen Invitational, the world champion defeated Nakamura in a closely-contested final match — which, by the way, was played almost exactly one year ago, on 3 May 2020. The same players would also play the deciding match of the tour finals in August, with Carlsen again getting the better of his opponent. Naka, on the other hand, knocked Carlsen out of the Lindores Abbey Challenge in the semifinals.

In the first set of the New in Chess Classic finals, Carlsen scored a 3-1 victory. After two draws, the Norwegian scored the first win of the day with white. In a must-win situation, Nakamura had a comfortable position in game 4 and a large advantage on the clock. The American star, however, could not make the most of his chances and ended up losing the game in 31 moves.

Meanwhile, in the match for third place, Shakhriyar Mamedyarov and Levon Aronian each scored two wins with black to go into the second set with the score tied. The Azerbaijani has proven to be a nice addition to the lineup of the tour, as his dynamic style has made for a number of exciting games both during the preliminaries and during the knockout. 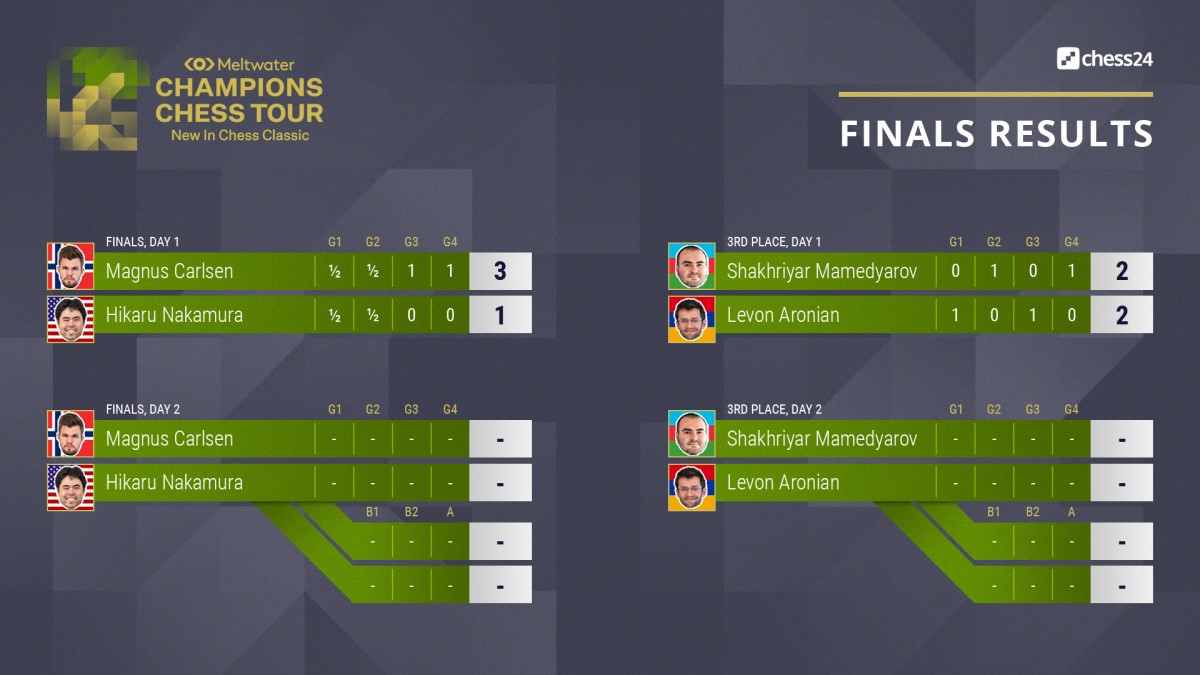 After drawing the first two games (in 65 and 38 moves), Carlsen got ahead on the scoreboard by winning with the white pieces. The world champion had a positional advantage, when he blundered a bishop.

On this DVD a team of experts looks closely at the secrets of Karpov’s games. In more than 7 hours of video, the authors examine four essential aspects of Karpov’s superb play.

The commentators were not sure whether this was a sacrifice or if Carlsen had miscalculated the forcing line. Later, he confessed it had been a blunder. Carlsen had prepared the sacrifice for a different variation, but missed the intricacies of this exact position. He even looked at 27.Bxb7 Rxb7 28.e5 Qe7 29.exd6 and here 29…Qxe1 30.Rxe1 Rxe1 31.Qxb7 Be4+ (attacking queen and king at the same time) does not work for black:

White can capture the bishop with 32.Qxe4 and after 32…Rxe4 33.d7 there is no way to stop the pawn from promoting. However, none of this happened, as Nakamura played 29…Qd7, equalizing. As Carlsen explained later, this was a case of him having such a superior position that even after giving up a piece he was better.

The highlight of the day was game 4, as Nakamura chose the correct strategy in the opening, not hurrying to create tactical opportunities but slowly finding good squares for his pieces, planning to take advantage of his bishop pair later on. The American also had a major edge on the clock. However, just when the commentators were talking about Carlsen’s position being on the brink of collapse, Nakamura made a strange decision.

Naka played the strange-looking 28.f3, weakening his king without getting much in return. Carlsen quickly grabbed his chance to simplify the position, happily giving up two pieces for a rook and a pawn. Shortly after, the American blundered while very short on time and resigned the game.

All four games of the first set finished decisively, with all victories going for the player with the black pieces in the match for third place. The first two encounters were highly tactical, lasting 24 and 21 moves respectively.

Game 3 was the first one to reach an endgame, with Mamedyarov getting good chances to hold a draw with the white pieces from a slightly inferior position. The Azerbaijani, however, faltered on move 31.

Should White play 31.b4 or 31.Kg3 here? Mamedyarov chose the former and resigned the very next move. Karsten Müller explains why.

Despite the rather painful loss, Shakh managed to bounce back in the fourth game of the set. And he did it after getting a tough middlegame position.

White is better here. Black’s knight on h3 looks menacing at first sight, but is in fact unable to move, while the passed pawn on the e-file is more a weakness than a threat. Given these factors, it is almost impossible that Aronian would not have found the strong 30.Bxf6 in a classical game — in this 15-minute game, though, he went for 30.Rae1, giving Black a chance to activate his knights with 30…Ng4

White cannot capture with 31.Bxh3 due to 31…Ne3, so after 31.Nf4 Mamedyarov got to coordinate his pieces with 31…Ngf2+ 32.Kh2 Nhf2+. The tricky Azerbaijani went on to outplay his opponent in the ensuing tactical skirmish, getting the win he needed to go into day 2 with the score tied.