Classical chess is back as the FIDE World Cup starts today in Sochi, Russia. With arguably the most spectacular format in elite tournaments and tickets for the 2022 Candidates at stake, there’s no doubt this the most important event of the year.

As usual, this tournament means a near-full month of non-stop chess. Unusually, it’s been revamped. For the better in my opinion.

What’s new with the World Cup?

I applaud FIDE for organizing the Women’s World Cup and the (Open?) World Cup together for the first time. I believe this can bring more attention to Women’s chess, by putting them in the spotlight alongside the best players in the world. Besides the Olympiad, I can’t think of other scenarios where this happens.

I think the idea would greatly benefit World Championship matches too. It would double the number of daily games, boosting the chances for decisive results per round and bringing Women’s chess coverage from the media to a whole new level.

True, the shortage of daily games is not going to be a problem in Sochi though, as the number of participants grew by 60% compared with previous World Cups for both categories. This is part of a plan by FIDE to have more federations competing, reward fair play, and stimulate junior players. These initiatives resulted in a larger prize poll and probably more following.

Alas, the final match is reduced to only two games and an eighth-round has been created. Top favorites are seeded for round 2 which virtually should make no difference for the winner, but it plays against our beloved dark horses.

Now, let’s take a look at some of the players.

With the exception of Humpy Koneru and Ju Wenjun, ‘everybody’ is going to be there. A great roster makes for great stories and as a norm, the World Cup leaves us a few heroes (heroines in this case). A good performance here can serve as a billboard for some players to find their way into some big events and create more following for Women’s chess… 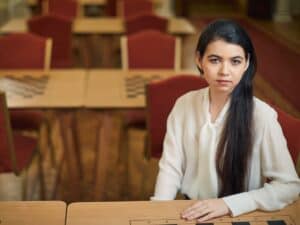 For the moment it is hard not to point out Goryachkina as the clear favorite. Lagno and the Muzychuk sisters are next in line. But I expect the young Zhansaya Abdumalik and Sarasadat Khademalsarieh to reach quite far.

Top-3 finishers qualify for the Women’s Candidates. We’ll see how everything rolls.

For Abhimanyu Mishra, it will be a unique experience. Not only will he be debuting as a Grand Master (still not official though), but sharing the stage with the world elite for the first time. He’s up against the tough Baadur Jobava but history recalls 14 years-old Magnus Carlsen, Wesley So or Wei Yi stunning a few famous Grandmasters in a row.

Yes, Abhimanyu is only 12 years, 5 months, and a few days old but he is no stranger to shocking the chess world. Watching him play without the pressure of achieving norms is going to be interesting. The sky’s the limit for this boy so keep an eye on him.

And since we’re talking about the youngsters…

Add Duda, Van Foreest, and Dubov if you will. They’re already in their 20’s but together with the teenagers above, those are the last names to steal the hearts of the fans. A breakthrough in this scenario could mean complete consecration. For the sake of the tournament, I hope it happens to at least one of them.

Firouzja is the easiest to root for, as it seems he’s on the brink of climbing higher than he already is. However, the World Cup format is treacherous and unpredictable, so falling soon means nothing. But a big result from one of them, would definitely not be casual.

Maxime Vachier-Lagrave was famously knocked out in the semi-finals of 2013, 2017, and 2019 World Cups. Every time it seemed he deserved a place in the Candidates but when it came to making things happen on the board, he came short. Think of his Grand Prix tragedies and average rating heartbreaks from those years too.

Maxime reaching Round 4 and 5 in 2009 and 2015 suggests that he knows how to play these tournaments. It took the eventual winners to beat him. Same in those failed semifinals. He just needs that last push.

After finally getting a shot at the Candidates – he came in second – he proved to all nay-sayers he belongs to the group where Magnus’s contender is. He just needs to secure a way to get in. I wish him luck this time.

Levon Aronian is the only player ever to win two World Cups. Khanty-Mansiysk 2005 and Tbilisi 2017. A third victory in these tournaments would be a historical feat, worthy of a legend. Bear in mind this man already won three Olympiads and has the fourth-highest personal rating ever.

His recent form suggests that he’s going to be the sandman for anyone in his path. Combine his practical, trouble-setting style with his display of power in Rapid and blitz from the Goldmoney Asian Tournament and he’s the favorite against all but one player. This brings me to my next point. 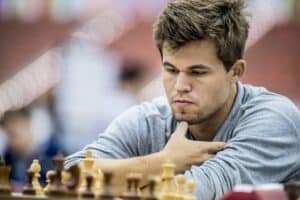 Is Magnus raising eyebrows at the World Cup?

It’s happened before. After all, he’s so good that he could earn a spot in the Candidates and then go on to challenge the World Champion… wait what?

Magnus playing the World Championship cycle has been discussed before. His participation in the 2017 World Cup and 2019 FIDE Grand Swiss implied the same potential paradoxes. In case he would make the top-2 here, the other finalist and the winner for the 3rd place match would get the spots. But his impact over who gets a chance to qualify for the Candidates can’t be underestimated.

Arguments aside, who doesn’t love to see Magnus in action? Or rather, who doesn’t want to see him win the whole thing…for the first time?

As a teenager, he played three editions with different luck. From elimination in Round 1 in 2004 to getting into semi-finals in 2007. As the World Champion, his only outing was in 2017. Coming as world #1 and being knocked out in Round 3 was certainly a failure.

So, this is the only major tournament that has resisted him. What to expect for this one?

My gut is that Tbilisi was a hiccup at a time he wasn’t feeling too confident. A lot of things are different now: he’s hungry for classical chess; wanting to send a message to Nepo; warmed up in rapid and blitz from the Champions Chess Tour events; in a format that plays to his strengths…

Is this his time? Hard to tell. But the smart money is on him.