3/9/2021 – Bobby Fischer was born 78 years ago today, on 9 March 1943. Countless articles and books have been written about the controversial American, and recently John Donaldson published another book about the 11th World Champion: “Bobby Fischer and His World”. Well researched and well written, it shows the many facets of Fischer’s personality, and is definitely one of the best books ever written about Fischer’s life, if not the best.

No other World Champion was more infamous both inside and outside the chess world than Bobby Fischer. On this DVD, a team of experts shows you the winning techniques and strategies employed by the 11th World Champion.

Grandmaster Dorian Rogozenco delves into Fischer’s openings, and retraces the development of his repertoire. What variations did Fischer play, and what sources did he use to arm himself against the best Soviet players? Mihail Marin explains Fischer’s particular style and his special strategic talent in annotated games against Spassky, Taimanov and other greats. Karsten Müller is not just a leading international endgame expert, but also a true Fischer connoisseur.

John Donaldson: Bobby Fischer and His World – A Review

Bobby Fischer’s life is full of contradictions: he learned chess at the age of six, was US champion for the first time at 14, Grandmaster at 15, the youngest in the world then and until 1992, when Judit Polgar broke that record. In 1972 he became World Champion and caused a chess boom in the USA and many other countries of the world, but he himself did not play an official game for twenty years after winning the title.

Fischer’s mother Regina was Jewish, just like his biological father, but Fischer himself repeatedly made headlines with anti-Semitic tirades. After winning the World Championship match against Boris Spassky in 1972, Fischer was celebrated in the USA, but later he caused a stir with anti-American statements.

In 2004, the US government demanded that Japan extradite Fischer to the US to stand trial for tax evasion – which would probably have resulted in a long prison sentence. Iceland then made Fischer an Icelander and so Fischer lived the last years of his life in Reykjavik, where he died on 17 January 2008 at the age of 64. 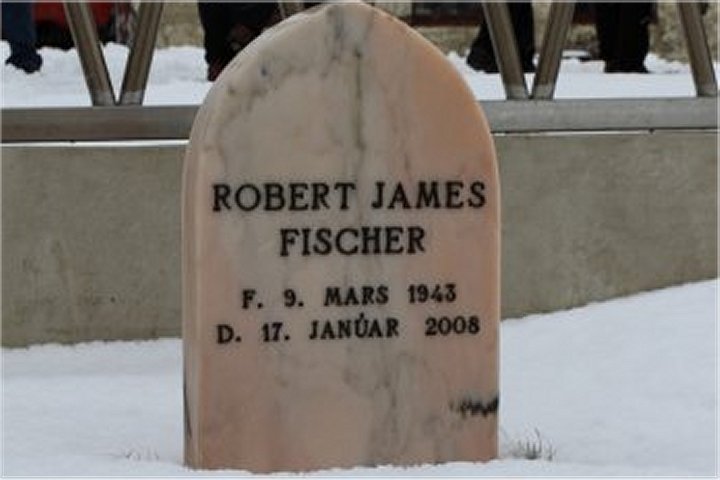 But Donaldson’s book Bobby Fischer and His World is not a classic biography that traces the life of its hero in detail year by year. Instead, Donaldson focuses on crucial moments in Fischer’s career, which he illuminates in more detail.

I was interested in answering a number of nagging questions about the eleventh World Champion. Who was Fischer’s chess teacher? How did Bobby make his incredible jump in strength from early June of 1955 to late August of 1958? Why did he have such a hatred of the United States government? Why, with his mother a doctor and his sister a nurse, did he possess such an aversion to Western medicine? Why did Fischer play Spassky a rematch after so many earlier planned matches had fallen through? What happened to his belongings, particularly those lost after his storage locker was auctioned off? … As I … dug deeper into my research … I realized the first-hand observations, documentations, and opinions (some contradictory of others) that I had gathered from players, friends, supporters, and other people in Fischer’s orbit wove a story. And that story is what developed into this book, a portrait of Fischer’s world (p. XIII).

Thus, a large number contemporary witnesses, friends and acquaintances of Fischer are quoted in this book, and they convey a lively and multi-layered picture of Fischer, from his youthful years in New York, when he took his first steps into the chess world, through the “Dark Years” to Fischer’s death in Reykjavik. Many facets of this picture are known – Fischer’s paranoia, his mistrust, his anti-Semitism, his love of chess, his ambition and will to win, etc. – but at the same time the accounts also point to other sides of Fischer: for instance his friendliness, his sincerity, his boyish charm.

Fischer’s life is well documented and researched, but Donaldson still discovered a whole host of little-known facts. For example, he mentions Fischer’s short career as a correspondence chess player, or recounts how Fischer was once commissioned to adjudicate games, or tells how Fischer took part in the “Second Dewar’s Sports Celebrity Tennis Tournament” in California in early June 1972, just before the start of his match against Spassky, a tournament in which about 60 of the best athletes in the USA competed against each other in tennis, including such famous names as basketball legend Elgin Baylor, boxing star Joe Frazier or O. J. Simpson, who then was still known as a football player first of all. Despite all these celebrities Donaldson claims that “Bobby was the centre of attention”, and according to newspaper reports, quite a few of the big sports stars asked Fischer for his autograph.

Donaldson has also tracked down important, hitherto little-known people who played a major role in Fischer’s life. One of them was Lina Grumette (1908-1988), six-time US Women’s Champion, whom Fischer met when he stayed with her in Los Angeles during a trip in July 1957. She became something of a second mother to Bobby and even travelled to Reykjavik in 1972 during the critical phase of Fischer’s World Championship match against Spassky, and apparently she played a major role in helping to convince Fischer to finish the match which made him World Champion. (Cf. pp. 119 to 121)

These short biographies of people who have crossed Fischer’s path help to make Donaldson’s book so exciting, interesting and readable. Through them one learns not only something about Fischer but also about the chess world in the USA, and players whose names one might only know because they appear in a database or a book after having played one or more games against Fischer, suddenly come to life. One example of this is Ron Gross, whom Fischer got to know at the US Junior Championship in 1955. 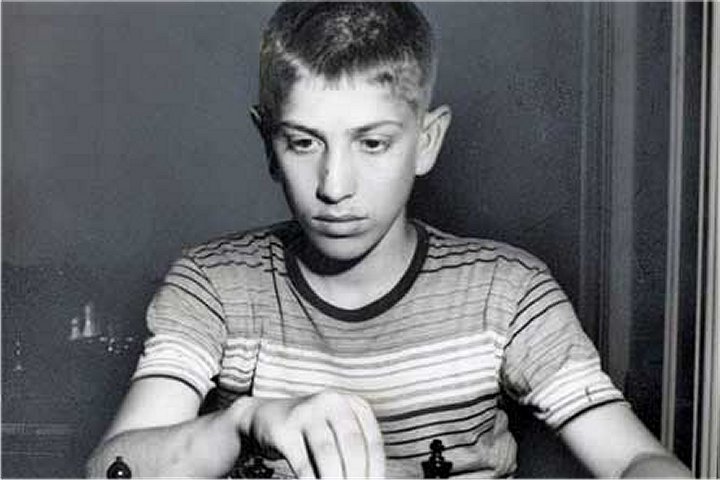 Soon after, Gross moved to New York and the two youngsters explored New York’s chess scene together. When Gross moved to California to study they still remained friends, and regularly met until the 1980s. Fischer visited Gross regularly and even after 1972, when Fischer hid from the public eye, the two went fishing together or travelled to Mexico. Until Fischer one day felt betrayed by Gross because of a newspaper article, which Fischer had not even read, but which was enough for him to end a 30-year friendship with a short telephone call.

The many wonderful black-and-white pictures that illustrate the book also convey a good impression of Bobby Fischer’s world. They range from pictures showing the 13-year-old Fischer at the board to shots taken at the end of Fischer’s career.

Donaldson, who is an International Master with two Grandmaster norms, also attaches great importance to Fischer’s chess heritage. The book includes 99 games, and some of them are well-known, but Donaldson has also unearthed a number of previously unknown Fischer games.

All in all, Bobby Fischer and His World is exciting to read, and the thorough research, the entertaining writing, the many memories of contemporary witnesses, the wonderful pictures and the appreciation of Fischer’s chess legacy, make this one of the best, if not the best book ever written about the controversial and fascinating life of Bobby Fischer. 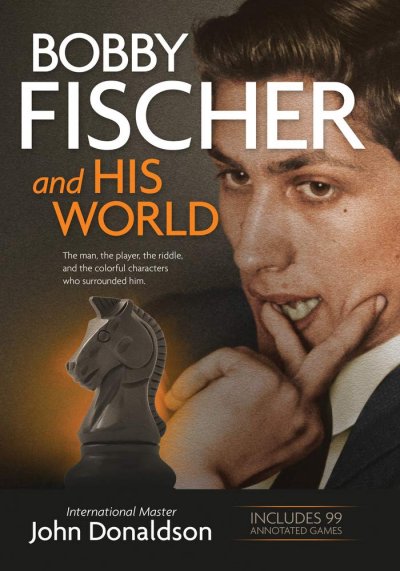 The book’s blurb reveals the following about the author John Donaldson:

John Donaldson, inspired by the World Championship between Bobby Fischer and Boris Spassky, began playing chess in the fall of 1972, at the Tacoma Chess Club. He is an International Master with Grandmaster norms and has served as the U.S. team captain in twenty-one Olympiads and World Team Championships, including Lucerne 1993 and Baku 2016, where the Americans finished first. He has written numerous articles and books, including The Life & Games of Akiva Rubinstein: Vol. 1: Uncrowned King and Vol. 2: The Later Years and A Legend on the Road: Bobby Fischer’s 1964 Simultaneous Tour.

John Donaldson makes his home in Berkeley, California, with his partner Holly and their eighteen-year-old tuxedo cat Seuss.

Johannes Fischer
Johannes Fischer was born in 1963 in Hamburg and studied English and German literature in Frankfurt. He now lives as a writer and translator in Nürnberg. He is a FIDE-Master and regularly writes for KARL, a German chess magazine focusing on the links between culture and chess. On his own blog he regularly publishes notes on “Film, Literature and Chess”.
Discussion and Feedback Join the public discussion or submit your feedback to the editors
We use cookies and comparable technologies to provide certain functions, to improve the user experience and to offer interest-oriented content. Depending on their intended use, analysis cookies and marketing cookies may be used in addition to technically required cookies. Here you can make detailed settings or revoke your consent (if necessary partially) with effect for the future. Further information can be found in our data protection declaration.