Grandmaster Simon Williams is certainly keeping himself very busy. Hot on the heels of the release of this week’s Chessable course on Grandmaster Gambits 1. e4 – Part 2: Aggressive Lines (written by Simon together with International Master Richard Palliser) comes the new Proof of Work Challenge. 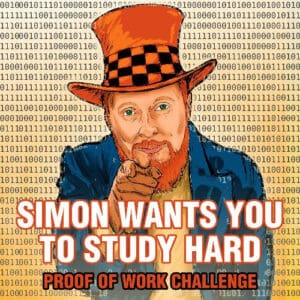 This course is free and it covers a very interesting subject:

‘This course was created during the FTX Crypto Cup leg of Champions Chess Tour in May 2021, in order to celebrate this historic partnership. Since cryptocurrencies wouldn’t exist without computers, we decided to use this opportunity to talk about how computers have affected our own game and provide some coverage of the history of chess computer engines.’

The ‘challenge’ aspect of the course is explained here:

‘The Proof of Work Challenge contest will be held from 24th May – 30th May 2021. We will be giving away 5 of Simon William’s courses to the winners of the contest, as follows:

Those of you who finish in the weekly XP points leaderboard’s Top 10 of May 24th – May 30th will get a chance to win one of GM Williams’s courses for free. In total 3 courses will be given away this way.

An additional two more of GM Simon Williams’ courses will be given away at random to any student that has over 1000 XP points during this same week.

In order to participate

We wish good luck to all participants and may the best tactician win!’

Simon presents a number of games featuring Engines vs Humans and then a collection of battles of Engines vs Engines, starting with a famous example which doesn’t quite fit into either category. 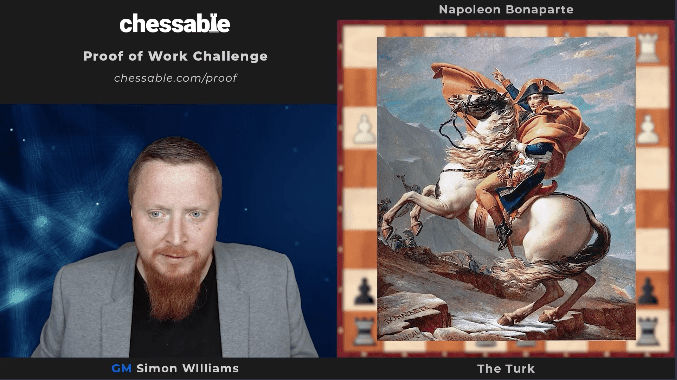 The course explains why this is so and there is the addition (some would say bonus) of Simon imitating a robot whilst demonstrating the moves of the final combination.

The classics are there, of course: Deep Blue vs. Garry Kasparov, Hydra vs. Michael Adams and Deep Fritz vs. Vladimir Kramnik.

There is also a game in which we were all given an early indication as to what the future had in store for Human vs. Computer challenges. Bent Larsen featured in a recent episode of our Checkmate Monday series but today we see him on the receiving end of a defeat.

An Early Blow to the Human Race 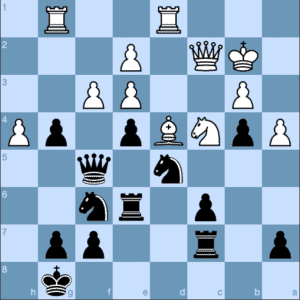 What did Deep Thought play here?​

‘Even though Larsen was well past his prime, he was still a very worthy opponent (considering he was among the best 3-5 players in the world some 20 years earlier). And even though he didn’t play his best chess in this game and got outclassed, it was a notable accomplishment for the Deep Thought programmers (and Deep Thought as well – engines do have souls, you know) nevertheless.’

‘We join the action on move 28. White’s position was quite suspicious from the opening and Larsen decided to ‘add the fuel to the fire’ by sacrificing his g-pawn, attempting to open the g-file and mount some sort of attack. However, the merciless engine was not too impressed with this display and (rightfully) concluded that White doesn’t have any attack. In fact, Black has a threat of his own, although its execution does require a bit of calculation.’

‘A calm move – the bishop on d4 is trapped. White has some tricks, but not more than that.’

No Ghosts on the Open g-file 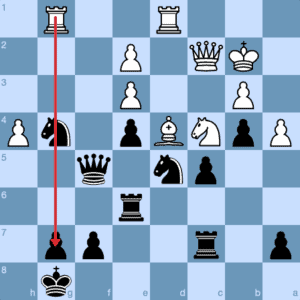 Imagine if we were Black here against such a renowned Grandmaster. We would assume opening the g-file would simply play into Larsen’s hands and that an unstoppable attack would swiftly follow. Imagine trying to justify voluntarily opening the g-file to friends after the game.

Computers play entirely without prejudice. They do not fear ghosts and do not respect a player’s reputation.

‘Now the g-file is opened and this is what Larsen was hoping for, however White doesn’t have anything concrete here.’ 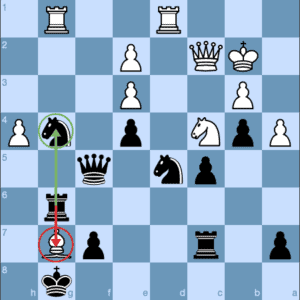 ‘A cold shower and a typical ‘engine’ refutation of an incorrect combination. This game indicated the starting point of the ‘humanity’s downfall’. In the upcoming years, Garry Kasparov would remain to be our ‘only hope’. Alas, as we will soon see – in the 1990s, he would fall, as well.’

Larsen could not prevent the loss of material and resigned after 43 moves. This was a pivotal moment in the struggle for chess supremacy between Human vs. Engine and one which is often overlooked due to the even more high-profile examples which followed in the 1990s. Yes, Bent Larsen’s best days were indeed behind him, but he was still number 35 on the list of FIDE ratings for January 1988 and number 39 on the July list of the same year. It is food for thought that the current number 39 is Kirill Alekseenko – who played in the recent FIDE Candidates Tournament.

Head here for the course and don’t forget the Proof of Work Challenge ends on 30 May 2021.