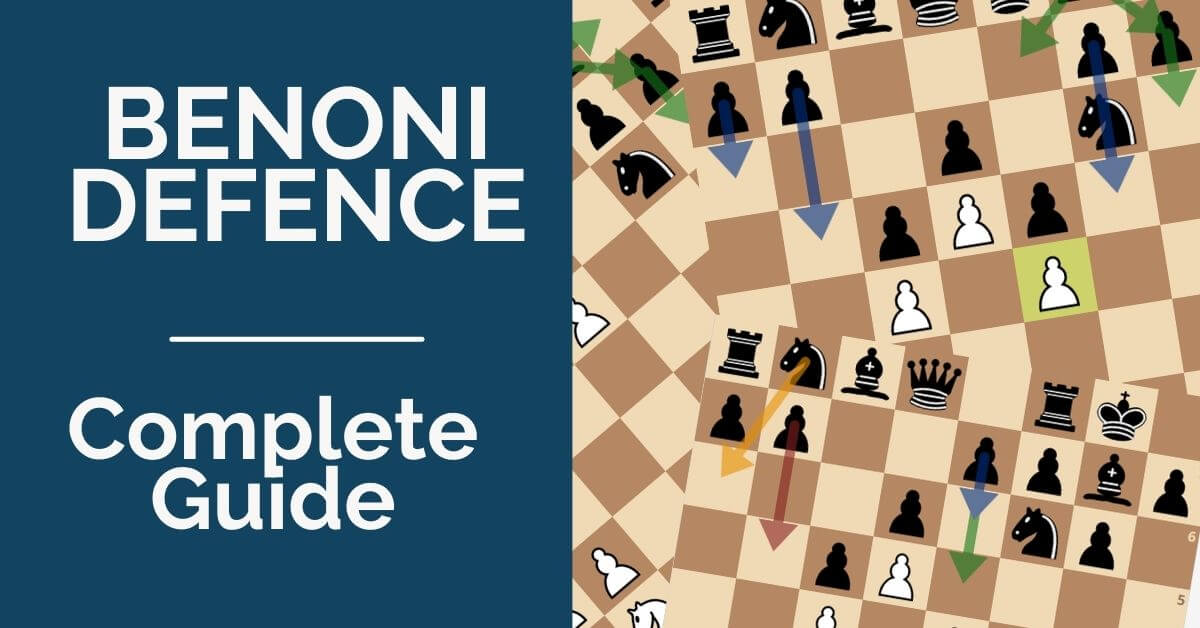 Benoni Defense comes from the Hebrew expression “Ben-Oni”, which means “son of my sorrow.” This might have given you melancholic impressions, but don’t let it deceive you. The Benoni is one of the most aggressive chess openings. It leads to highly unbalanced positions, and players of all levels opt for it when they want to play for a win against 1.d4.

This defense is characterized by the …c7-c5 pawn break and usually arises after the moves 1.d4 Nf6 2.c4 c5 3.d5, when White grabs more space in the center with pawns, but Black tries to counterattack from the sides. 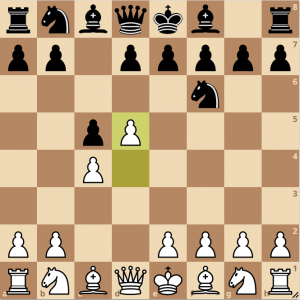 There are many possible ways on how to develop pieces for both sides now. In this article, we will discuss the most popular ones.

This is the sharpest option. It gives Black excellent dynamic possibilities and was used by many attacking players. From the old days, the most notable admirer was the eighth World Champion Mikhail Tal. The Modern Benoni suited his aggressive combinational style perfectly well and led to many brilliant victories. We also have to mention the top grandmaster Vugar Gashimov, who was playing this opening at the highest level all his life long almost exclusively. Nowadays, the Modern Benoni is still used by many strong grandmasters. 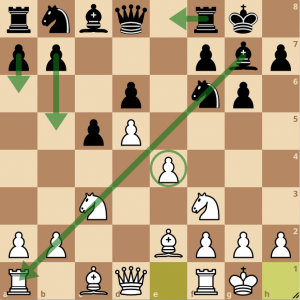 One of Black’s main plans in this position is to prepare the …b7-b5 pawn push. Supported by the great dark-squared bishop on g7, the pawn avalanche on the queenside will give Black a strong initiative. Also, the rook from e8 will increase the pressure on the e4-pawn. White can easily go wrong in such a dynamic position; once this happens, the whole position can collapse in no time.

But what should White do apart from being cautious? Black’s position is not flawless. There is a serious weakness on d6. If White can regroup their pieces well, Black can experience unpleasant feelings. 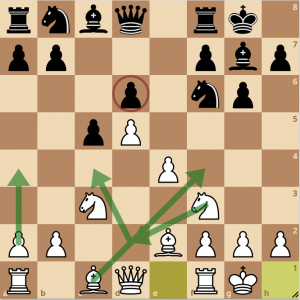 A strong maneuver was suggested by Aron Nimzowitsch: the knight goes from f3 to d2 and then to c4. From here, it will target the d6-pawn. The pressure can be increased by the bishop coming to f4. Black will have to take care of the weak pawn and play passively. Especially if White can firmly prevent Black’s counterplay connected with …b7-b5 by playing a2-a4.

A similar idea can be implemented with the pawn on e3 instead of e4. This is aimed to reduce Black’s pressure on the center. Let’s look at the following position: 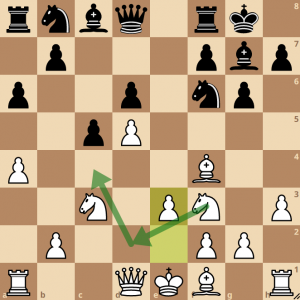 But it is not the only plan at White’s disposal. One of the most aggressive options involves f2-f4 with the following break in the center or attack on the kingside. 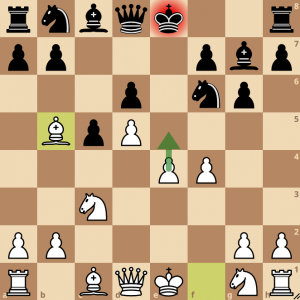 Now both natural 8…Bd7 and 8…Nbd7 will give White a dangerous attack after 9.e5! This is why the main move in this position is 8…Nfd7. There is still much theory ahead and many grandmaster games have been played from this position. The arising positions are sharp and complicated; both players have to show their best not to fall down.

This opening is for courageous players. Below you can see an example of how breathtaking the attacks in the Modern Benoni can be:

The Snake Benoni is played much less often but can serve as a surprise weapon. Black starts in the same fashion as in the Modern Benoni with 3…e6 4.Nc3 exd5 5.cxd5, but instead of fianchettoing the bishop, plays 5…Bd6. 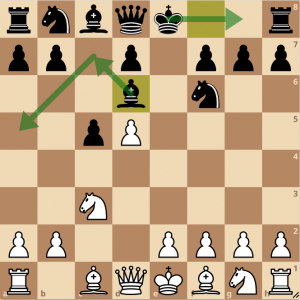 This is a temporary place for the bishop. Later it can go to e5 or to a5 via c7, which is the most popular way. There is also a more solid plan to castle, play …Re8, and bring the bishop back to f8. In all cases, Black’s main plan remains the same: to prepare counterplay on the queenside with …b7-b5.

White has a lot of good setups against it; some of them can put Black into trouble. But the Snake Benoni still can be a good weapon against an unprepared opponent. Here you can see how Vugar Gashimov used it to beat Anton Korobov at the European blitz Championship 2010:

In contrast to the above-mentioned lines, in the Czech Benoni, Black tries to block the center. This happens after the …e7-e5 pawn push. The arising pawn structure is quite typical and can also arise from the King’s Indian Defense. 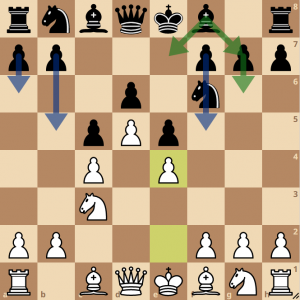 The position is closed, and the play goes much slower than in the previously discussed variations. Black can put the bishop on e7 or g7, but in both cases, the plan usually involves breaking the center with …f7-f5 or …b7-b5. Although as a rule, the latter can be easily prevented by White.

White can also break the center with b2-b4 or f2-f4, depending on the circumstances. White usually has better chances in such positions thanks to the space advantage. But the arising positions are complicated and Black’s play tends to be easier.

This is one of the most unusual chess gambits: Black sacrifices a pawn on move 3 just to continue development and use the opened files sometime later. Yet, this is a very serious opening and a good choice for those who want to play for a win as well. Black’s play here is quite schematic and easy to grasp.

The Benko Gambit starts after the moves 1.d4 Nf6 2.c4 c5 3.d5 b5. White has many ways of meeting it, but the main option is to accept the gambit. After 4.cxb5, Black doesn’t try to win the pawn back. Instead, they aim to open up the queenside with 4…a6.

Next, Black will develop the kingside with …g6, …Bg7, and castling. On the queenside, Black usually plays …d6, …Nbd7, …Qa5, …Rfb8, and tries to put pressure along the a- and b-files.

The Benko Gambit is a popular opening at both grandmaster and amateur levels. It has been frequently used by Magnus Carlsen, Vassily Ivanchuk, Veselin Topalov, Viktor Bologan, Alexander Khalifman, and many other strong grandmasters.

This is the way of playing when Black delays the actions in the center and develops the kingside first. Later the game usually transposes to one of the above-mentioned scenarios. For example, after 1.d4 Nf6 2.c4 c5 3.d5 g6 4.Nc3 Bg7 5.e4 d6 6.Nf3 0-0 7.Be2, the following position arises: 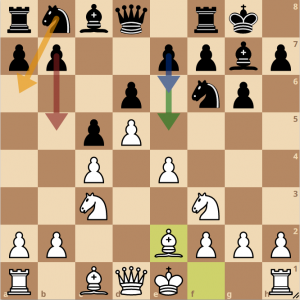 Black can try to switch the game to the Modern Benoni kind of positions with 7…e6, block the game with 7…e5, go the Benko-style with 7…b5, or keep waiting with 7…Na6.

You may wonder why Black opts for these move order tricks if it eventually transposes to the known positions anyways. Well, it is not only about trying to confuse White; Black also wants to avoid some of White’s systems. There are certain drawbacks to this approach too. For example, if Black wants to get back to the Modern Benoni type of positions, White gets an additional possibility of taking back on d5 with the e-pawn.

The Benoni Defense gives Black a wide choice of interesting systems. All of them lead to complicated and unbalanced positions, which makes this opening attractive for fighting players. The most popular options for Black after 1.d4 Nf6 2.c4 c5 3.d5 are the Modern Benoni and the Benko Gambit. In both of them, Black aims to seize the initiative and play actively. The Czech Benoni, on the other hand, considerably slows down the play and carries over the fight to the later stage of the game. Overall, the arising positions are exciting and worth trying for both colors.