Home What's New The Way We Were

Do you ever cast your mind back to the way we were?

The last year and a half has proved to be a very challenging time for everyone. So many aspects of our lives have been changed dramatically and no doubt some of our former ways are destined never to return.

In the small world of chess, we have had to accept that playing through a screen has definitely become the ‘new normal.’ In former times, Internet chess was used for practice and relaxation in the majority of cases and certainly not for anything particularly serious. Now, even the world’s elite players regularly test their strength in high profile online events. Real-life events are trying to re-establish their own genre, but with mixed results. For example, the prestigious FIDE World Cup has been touched and tainted by the icy, unforgiving fingers of COVID-19.

There are good and bad points to everything, of course – if only one knows where to look. Amid the chaos and disruption, there is time for contemplation. This can take the form of a reassessment of one’s life, highlighting the need to change things for the better. It can also make one reflect on the past and to reclaim lost moments.

Who remembers their first experience of serious games of chess? Have the sands of time trickled away, robbing you of the sights, sounds and emotions of your first-ever tournament experience? Or, to the contrary, is the start of your incredible chess journey etched on your mind, just like it was yesterday?

February 1981: My first Weekend Chess Congress – in the seaside town of Redcar, in East Cleveland.

One game on the Friday night, two on Saturday and two on Sunday. Using chess clocks for the first time and writing down the moves in my brand new scorebook. Analogue clocks, of course. Most people didn’t even have digital watches at the time.

Arriving at the venue and stepping into an atmosphere of cigarette and cigar smoke, tension and nerves, hustle and bustle.

Chess sets everywhere, all set up and ready for the inaugural battles of the weekend.

So many people! Seeing approximately 200 chess players shuffling into position made for a stark contrast to the small numbers of my Secondary School chess club.

Finding my Junior section and then not knowing what to do, until someone told me to ‘find your name on the wall and it will tell you where to sit.’

Listening to the opening remarks of the Arbiter, Gerry Walsh, with my nerves building by the second…

Then came the instruction: ‘Could you start White’s clock, please?‘. I was White in the first round and my opponent – a teenager, possibly the same age as me – pressed the button and suddenly the playing hall became silent and serious.

I played 1.e4 and quickly brought out my queen to try and ‘force’ a speedy checkmate, just like I did at school. My opponent was stronger than me. Once he castled his king into safety, he started to gain time by attacking my exposed queen. I tried hard to keep her active, with the inevitable consequence of eventually walking into a pin. I was outclassed and being outplayed in every department; quite a shock, as I was used to winning nearly all of my games at the school club.

Stubbornness prevented me from resigning, but my opponent’s queen and rook were hunting down my wandering king. After a few checks, the queen landed on a square adjacent to my king. I thought it was checkmate and was unsure what to say or do next. I looked up, only to see a grimace play about my opponent’s face. ‘It’s not mate,’ he said. I looked back at the board to find, much to my surprise, that I could capture his queen – for nothing. Suddenly I was a piece ahead in the endgame. It took me a while (my Friday night games were always my longest) and the position eventually boiled down to king and pawn against my opponent’s lone king. He resigned on move 61, as soon as I promoted my pawn to a queen.

I had no idea what to do next so I apologised for taking his queen. My opponent, although clearly disappointed, took the defeat well and told me, ‘Don’t forget to hand the result in.’

Sleep evaded me that night. I was far too excited and kept convincing myself I had good chances of winning the tournament. After all, I was so good I could fight back from being a full queen down!

Needless to say, a rude awakening of a different kind awaited me the very next day.

My opponent in the second round was so small that his feet didn’t touch the floor while he was sitting down. I remember thinking: Well, this should be an easy game. Soon I will be on 2/2!

Unfortunately, I was in for two hard lessons. One: don’t judge a book by its cover. Two: I need to learn some good opening moves – and quickly. 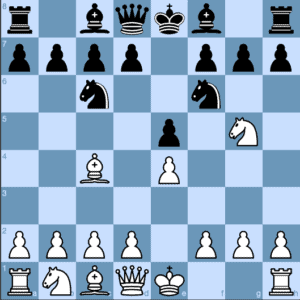 I was already out of my depth. I didn’t know what to do and I certainly didn’t know that this was all well-known, with Black having the perfectly good response 4…d5. After some thought, I tried a damage-limitation exercise with 4…Qe7. White’s knight then danced all over my position, eventually winning a rook and my queen with forks. My young opponent was already a much better player than me. In fact, he won one of the British Junior Championships a year or so later.

Crushed and deflated, I tried to gather my thoughts for the afternoon’s game. I didn’t like losing, but this situation was even worse. It was becoming very clear that I was a very small fish in a very big pool. Juniors half my age were so much better and that was a tough lesson to take.

Round three was a closer game. I was always slightly worse, but still fighting. Then my opponent make a big mistake. Panicking due to the passed pawn, he has just played 33…Rb8-a8. 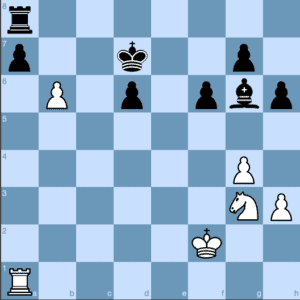 He put his head in his hands and made noises to suggest he knew he had just blundered badly. Of course, I played 34.Rxa7+ and he replied with 34…Kc6. Nerves and excitement got the better of me and I rushed forward with 35.b7?? 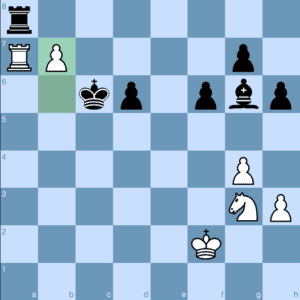 Now my opponent’s demeanour changed. He immediately played 35…Rb8 and patted his heart with his hand, to convey how shocked and relieved he was to have been handed a reprieve. I ended up losing after 70 moves. After he checkmated me, my opponent showed me that I should have forgotten all about trying to promote and simply captured the rook with 35.Rxa8, followed by 36.Rg8 with the demolition of Black’s kingside next on the agenda. Another hard lesson for me. Going home on Saturday evening with just two losses to show after a full day was an unpleasant experience.

A third consecutive defeat followed on the Sunday morning. A lot of my opponent’s moves came as a surprise to me and each surprise seemed to be accompanied by the loss of another pawn. Would I ever win another game?

My win in the fifth and final round raised my spirits, just in time. My opponent castled. I played 9.Bd3, 10.Qh5 and 11.Qxh7 checkmate. Even the win held back my chess development for a few months. I had convinced myself that castling was bad, as it made the king an easy target, as I had ‘proved’ by winning in just 11 moves.

The first tournament outside of my local school circles was over and it left me with plenty to think about for a very long time. I was thrilled to receive a certificate , despite scoring 2/5.

More than 40 years have passed by since I played in the First Redcar Chess Congress and so much has happened. I have had my share of good, bad and indifferent chess tournaments. The Redcar Congress taught me a lot about my own game and provided plenty of clues as to where I needed to work harder.

I faced two of my conquerors in subsequent events and gained revenge wins; the other three opponents I never saw again. I used 4.Ng5 against the Two Knights Defense exactly one year later, in round two of the Second Redcar Congress, winning material with the same forks I had fallen for in 1981. By then, I was also in the habit of castling – and my queen only came out for special occasions.

I played in every congress in the Redcar series and finally won the Open section in 2000, with 5/5; a very big moment for me.

When I started organising my own junior tournaments, I always made sure that every junior received a certificate, regardless of their score. Additionally, I managed to get smoking banned at our local tournaments, as I couldn’t recommend the events to my growing army of juniors. It wasn’t at all good for them to risk being ‘smoked out’ of their games.

Do you remember your first tournament experience, dear readers? Let us know, in all of the usual places. Do the memories evoke pleasure or pain? We must all make the most of every opportunity, for there is no way of knowing when it will be our last.

In the words of Nathaniel Hawthorne, ‘Time flies over us, but leaves its shadow behind.’