Home What's New Why do some countries always gain and other always lose rating points?

Why do some countries always gain and other always lose rating points? | ChessBase

6/10/2021 – World Youth Chess Championships are known to produce tons of interesting games and often very surprising and inconsistent results. However, it appears that at least one thing stays fairly consistent – certain federations typically gain rating points while others lose them at the event. Why is there such a contrasting trend for Asian versus European countries, and what could be the possible reasons behind it? Sveta Demchenko presents the data from which we can draw our conclusions.

Every year, hundreds of young talented chess players from all over the world get together to compete at the biggest international youth event – the World Youth Chess Championship (WYCC). Most years, over 60 countries send delegations with their best youth talents in hopes of returning home with crowned world champions and medalists. At the end, some come back home with broken hopes, while others make a joyful return with loads of newly-gained Elo points.

Personally, I have participated in the World Youth Chess Championships three times, with my best results being 6th place in 2017 (Uruguay) and 5th in 2019 (India). I have always enjoyed WYCCs, as I met many good friends through the event and also gained some rating every time. By contrast, some of my friends from other countries had a different experience. Rating-wise, the World Youth was their least favourite event because their team never performed as well as expected, and they would often come home with big rating losses. 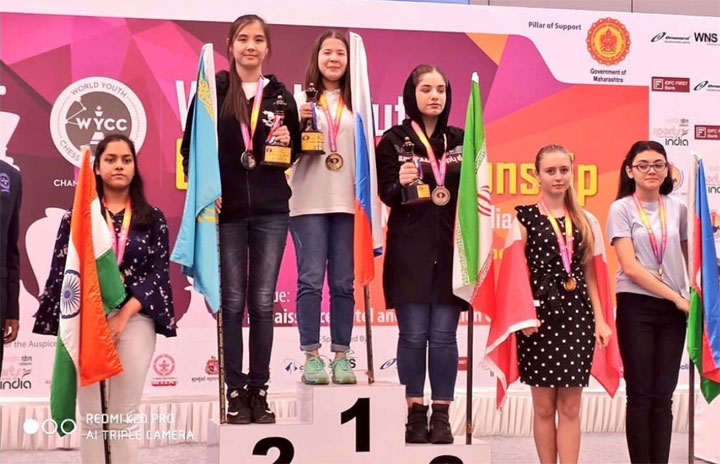 At some point, I started wondering if this may not just be a random occurrence. From my observations, there was a recurring pattern of how most Asian countries were gaining rating points at the WYCCs, and European ones, on the contrary, were losing them. However, these were just personal observations, which do not amount to much. So, I decided to make some calculations to see if the impression I had was indeed correct.

Below is a table of average rating gain or loss per player from each participating country in a given year at the WYCC. If you look at the rows horizontally, you may notice some interesting patterns for certain countries.

Did any particular country catch your eye? Sure, not every country has a consistent streak of rating gains or losses, but there are quite a few that show a very clear trend in one direction or another.

Let’s start with our biggest gainers: Armenia, Kazakhstan, India, China gained rating every year they participated; Kyrgyzstan, Iran, Sri Lanka, Turkey, Uzbekistan, Vietnam gained rating points every year they competed, except one. What do the countries on this list have in common? They are all located in Asia! (only Turkey’s geographical location is shared by both Asia and Europe).

By contrast, here are some countries that tend to lose rating points at WYCCs: Germany, France, Slovakia, Switzerland, Spain lost rating every year they participated; Austria, Croatia, Hungary, Italy, Serbia, Sweden, Colombia lost rating every year they competed, except one. These countries too, as you could have guessed, share a common characteristic: they are European! (only exception: Colombia). 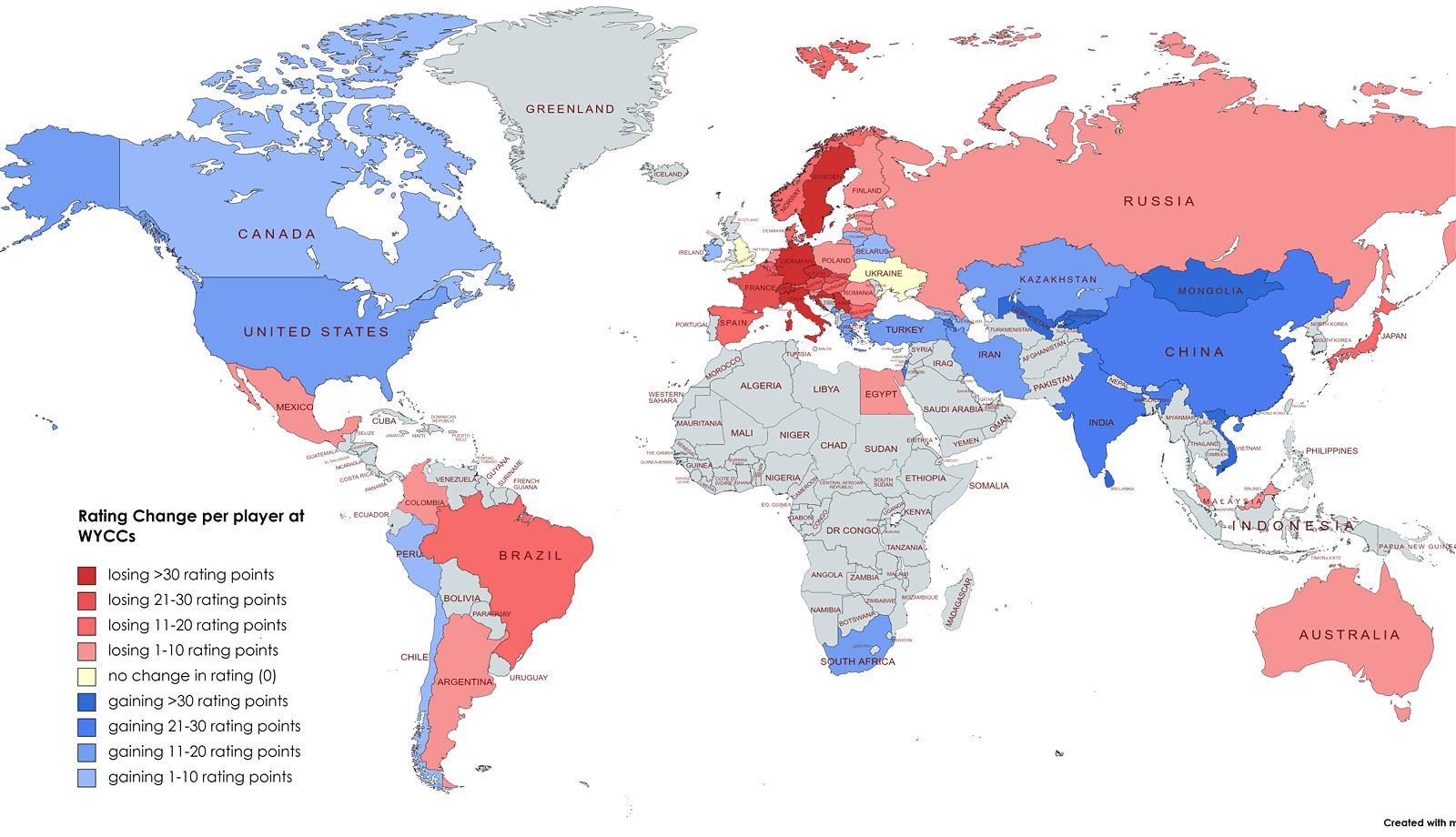 Overall, here are our leaders in rating change: the five countries that gain the most rating points at the World Youth Championships, and the top five most generous countries, who made the most “rating donations” over the years at the event.

It is curious to see that, on average, a player from Vietnam gains as much as 46 rating points from participating at the World Youth Championship, while a young Croatian player loses around 38 points! This could be considered a coincidence if it happened once, but these averages are taken starting all the way from WYCC 2012, which suggests that this has been the case for most of the last decade.

So, why do Asian countries always seem to gain rating points, while countries in Europe tend to lose them? Since I am not an expert in this matter, I would prefer not to claim any conclusions, but I can offer a few thoughts.

The way I see it, many factors can be responsible for causing this trend, and there might be an interplay of individual and systemic ones.

Individual factors are related to the player’s performance at a given event, which could be influenced by their personal motivation, health status, coaching, parental support, etcetera. For example, if a certain federation came without a coach some years, it is possible that their team has performed worse as a whole. In a broader sense, the players’ motivation can be influenced by the overall popularity of chess in their country. For instance, players from countries where a career in chess is viewed as prestigious may be more encouraged and motivated to perform better, as opposed to federations in which most players are attending WYCCs for travel and leisure purposes. Certain federations only send one official representative per section, and take a more serious approach to preparing their players for the WYCC – offering training camps and several coaches, whereas others do not have the resources or the desire to do so.

There are also a number of systemic factors that should be taken into consideration, primarily concerning the idea of rating accuracy. There is no doubt that FIDE ratings are internationally recognized as accurate estimations of skill level. However, youth players tend to progress very quickly, and sometimes their rating may not match their skill level, especially if there is a lack of strong tournaments in their country. Even if you simply look at the FIDE Calendar, the number of events held in Europe is much greater compared to Asia. In addition to more opportunities in their own country, travel within Europe is easier due to proximity and no visa-related barriers, which amplifies the scope of tournaments in which European youth can participate. Limited accessibility to tournaments in some countries can limit youth players’ opportunities to show their current level of play, causing some of them to be underrated. It is difficult to calculate exactly to what extent players from a certain country are overrated or underrated, but Asian youth players constantly gaining loads of rating points while playing in European Opens seems to be a very common pattern.

Overall, I would say the answer likely lies in a combination of several factors, and there is not one sole reason that would explain this trend. I would like to ask our readers, and experts around the world: what, in your opinion, is the main contributing factor as to why Asian countries often gain rating, while European ones typically lose rating at World Youth Chess Championships? Are there similar tendencies in other age groups, and at other types of chess events? And if so, what could be the possible reasons behind it?

We look forward to your theories and explanations.

Svitlana Demchenko
WIM Svitlana Demchenko, born 2003, is a Ukrainian-born Canadian chess player. She was a multiple-time Canadian Girls Champion and a two-time North American Girls Champion. Svitlana has been a member of the Canadian Women’s Olympiad Team since 2018 and was also part of Canada’s team at the World Youth Chess Olympiad. She speaks five languages and is presently a university student in the Biomedical Sciences program.
Discussion and Feedback Join the public discussion or submit your feedback to the editors
We use cookies and comparable technologies to provide certain functions, to improve the user experience and to offer interest-oriented content. Depending on their intended use, analysis cookies and marketing cookies may be used in addition to technically required cookies. Here you can make detailed settings or revoke your consent (if necessary partially) with effect for the future. Further information can be found in our data protection declaration.